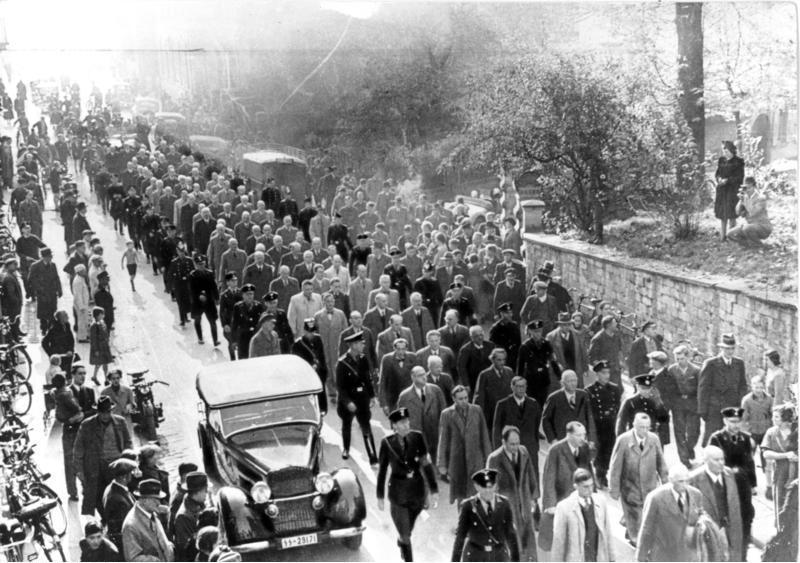 Columns of arrested Jews are marched away by police and SS through the streets of Baden-Baden, Germany, in 1938 following the events of the pogrom in November. (CNS photo/courtesy of the German Federal Archives Bundesarchiv)

WURZBURG, Germany (CNS) — Cardinal Reinhard Marx protested against the increase in violence against Jews in Germany during a remembrance ceremony marking the 80th Anniversary of the 1938 Kristallnacht and November pogrom in Wurzburg.

Cardinal Marx said that, while there is no threat today of state-organized pogroms, Germany’s Jews still face danger from an unprecedented level of violence.

“Today, police cars stand guard at synagogues, Jewish community centers, kindergartens and schools,” said the cardinal. “That is reassuring, but it is not normal.”

Germany’s Jewish population has suffered a sharp increase in violent attacks in recent years. According to an April 24 report by Deutsche Welle, Islamic anti-Semitism is now a major problem in Germany because of Islamic extremism imported by Muslim refugees.

Earlier this year, Josef Schuster, president of Germany’s Central Council of Jews, cautioned Jewish people against wearing traditional headwear publicly in major German cities due to the high risk of violent assaults. Berlin’s Jewish Museum, the largest of its kind in Europe, is also under constant police guard, with police cars parked day and night outside its entrance and observing the area from posts installed outside.

Cardinal Marx praised Jewish culture as a “seismograph” of German society and called for Christians to stand up for their Jewish neighbors currently facing persecution.

The cardinal spoke at a Nov. 8 ceremony at the site of a synagogue destroyed by the SS, the Nazi special police, during the November pogrom. The attacks began Nov. 7, 1938, peaked during Kristallnacht Nov. 9, and swept across Germany and Austria until Nov. 13. More than 1,400 synagogues, prayer halls and thousands of Jewish shops, apartments and cemeteries were destroyed during that time.

An estimated 1,200 Jewish people were killed or committed suicide, according to Deutschlandfunk radio, while about 30,000 were deported.

Recalling the violence, Cardinal Marx said, “The fact that so many people at that time — a majority of whom were Christians — looked away or watched with inaction fills us with shame even to this day.”

“We must not look away, as Jews are still constantly attacked in various forms,” he said. “We are obligated to contradict anti-Jewish prejudices and to resist anti-Jewish attacks. That is not only a civic duty, it is a Christian duty.”

NEXT: Where there are lies, there can be no love, pope says