World looks the other way at Christian persecution, pope says 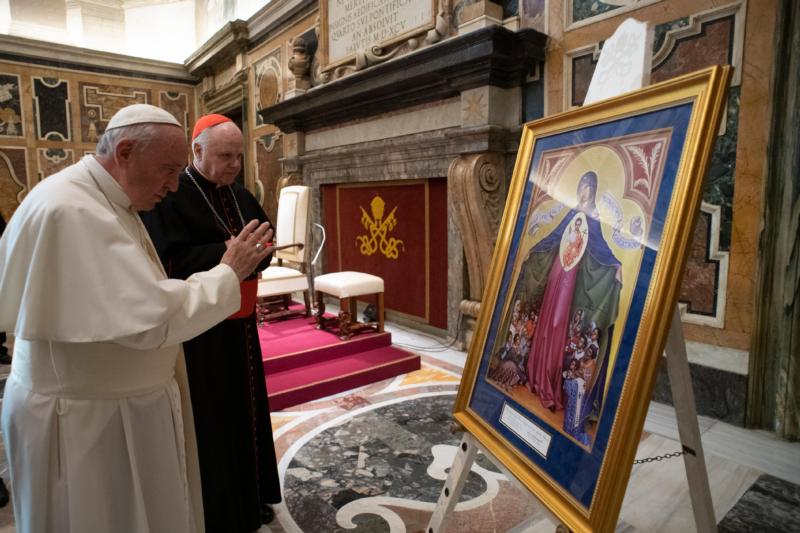 Pope Francis blesses an icon of Our Lady Help of Persecuted Christians during an audience Nov. 16 at the Vatican with members of the Equestrian Order of the Holy Sepulchre. Looking on is U.S. Cardinal Edwin F. O’Brien, grand master of the order. (CNS photo/Vatican Media).

VATICAN CITY (CNS) — Love for neighbor means being close to people, especially those facing oppression and violence for being Christian, and engaging in charitable work that that reflects Christian values and promotes interreligious dialogue, Pope Francis said.

Meeting with members of the Equestrian Order of the Holy Sepulchre of Jerusalem Nov. 16, the pope said that “the tragic situations of Christians who are persecuted and killed in ever-increasing numbers” is plain to see, even if the world “too often turns and looks away.”

Christians face not only “martyrdom in blood” in countries where they are persecuted and killed for the faith, but also a “white martyrdom” in democratic countries that try more subtly to stifle religious freedom and expression.

The knights and dames of the Equestrian Order of the Holy Sepulchre of Jerusalem dedicate themselves to supporting the Latin Patriarchate of Jerusalem and to responding to the needs of Catholics throughout the Holy Land. The order’s work covers Israel, Palestine, Jordan and Cyprus and includes funding seminaries, schools, hospitals and social centers.

Every five years, leaders of the order from around the world gather for their general assembly, called a “consulta.” This year’s meeting was held Nov. 13-16 in Rome.

Welcoming members to the Vatican, the pope said that they were, “in a certain sense, at home since you are an ancient pontifical institution under the protection of the Holy See.”

Pope Francis particularly thanked members for their commitment to helping the church respond to the refugee crisis in the region.

“It is a good sign that your initiatives in the field of training and health care are open to all, regardless of the communities to which they belong and the religion they profess,” the pope said. “In this way, you help to pave the way for the knowledge of Christian values, the promotion of interreligious dialogue, mutual respect and mutual understanding.”

However, the pope also emphasized that the order’s main purpose “is the spiritual growth of its members” so that their spiritual lives and works of charity offer a coherent witness to the Gospel.

Members of the order are not called to provide social and material improvements like “a philanthropic institution,” the pope said, but are called to “place at the center and as the final goal of your works the evangelical love for your neighbor to bear witness everywhere to the goodness and care with which God loves everyone.”

“It is above all your responsibility as leaders to offer an example of an intense spiritual life and concrete adherence to the Lord,” he said. “In this way, you will be able to render a valid service of authority to those entrusted to you.”