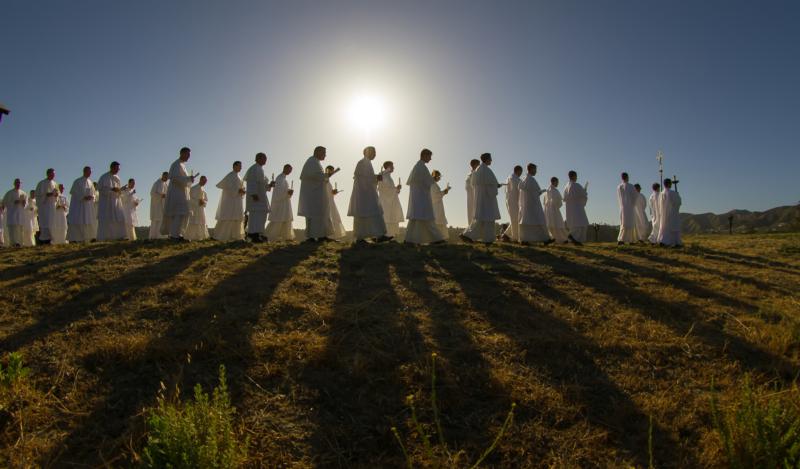 WASHINGTON (CNS) — The Norbertine Fathers at St. Michael’s Abbey in Silverado, California, just opened their doors, so to speak, to the world at large.

The priests and seminarians who live a monastic life at the abbey but also have apostolic ministries at schools, parishes and prisons in Southern California, recently developed an online platform for their donors and subscribers to essentially take part in the life of the abbey — gaining access to spiritual writings of the priests, audio to their Gregorian chants and video clips including links to a series they produced last year about themselves called “City of Saints.”

The site is called the Abbots Circle and is akin to a digital library, but it also provides opportunities for subscribers to ask questions.

“God is asking us to reach the church in new ways,” said Norbertine Father Ambrose Criste, novice master and director of vocations and formation for the order.

The new platform enables the priests to give back to their supporters and “provide spiritual nourishment,” he added. It also responds to those who come to the abbey seeking spiritual direction and often ask for more, wondering if they can read homilies or other works by the priests.

“They are thirsty for sound instruction, teaching nourishment and real-time questions and answers,” the priest told Catholic News Service Dec. 4.

And the timing of the site, which launched Nov. 1 and is available for a free two-week trial, is crucial for what the U.S. Catholic Church is currently going through, said Norbertine Father Chrysostom Baer, prior of St. Michael’s Abbey, in a statement.

“St. Norbert, a Catholic reformer, founded the Norbertines to lift up a demoralized clergy, preach to the lay faithful, and so renew the church in difficult times,” he said, noting that the order is fulfilling this same mission today, “in a time when both laity and clergy are demoralized by scandal, by using new media to connect with the faithful and offer support and guidance.”

Offering clear teaching amid church scandal is not something the order does just for those who come to the abbey to join them in prayers or liturgies or for those who come to the online portal, but it is something the Norbertines particularly offer to men seeking a vocation. Their numbers continue to rise, so much so that the order is building a new monastery, eight miles from the current site where they have been since 1961.

They just finished a $120 million campaign to get this two-year project started.

Currently, more than 35 men are in formation with the Southern California Norbertines. Father Criste said he has heard from a number of seminarians who joined the order this year and a few already in formation that they feel there is no better time to become priests. Above all, they have stressed their desire to be “holy priests,” he said.

“It makes sense to me that our vocations are thriving in these dark ages,” he said, adding that the Norbertines’ way of life — living and praying together and being accountable to one another — is a remedy for the church.

Their particular way of life, a ministry fed by contemplative prayer, is far from the modern lifestyle. The priests gather for prayer seven times a day and eat their meals in silence. But this lifestyle offers something authentic to today’s young people, said Father Criste, who added that so many are “thirsty to give to something bigger than themselves.”

PREVIOUS: Feast of Immaculate Conception does not get weekend dispensation

NEXT: San Francisco church readies new music for ‘Mass of the Americas’