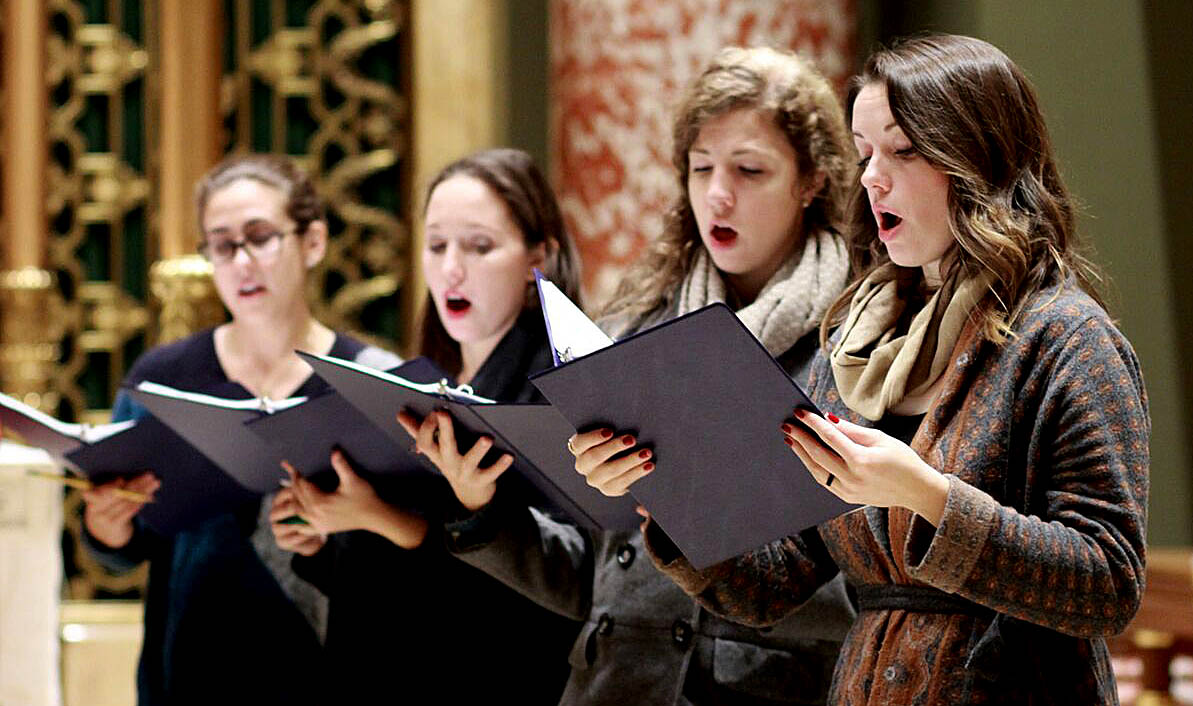 Amanda Sidebottom, Elizabeth Merrill, Grace Bernardo and Clare Maloney, members of the Choir of the Church of Our Saviour in New York City, record music at the church in October for "Hark! A Thrilling Voice Is Sounding," a CD of sacred Advent and Christmas music. (CNS photo/Harold Levine, courtesy Church of Our Saviour)

If there seems to be a culture clash between the Christmas season and the Advent season that precedes it, Christmas is going to win out practically every time, according to a pair of liturgical musicians.

“Christmas as a secular holiday has overtaken Christmas as a religious celebration. It starts early,” said J. Michael McMahon, executive director of the Hymn Society of the United States and Canada. “The Christmas season starts as soon as we put the turkey balloons in the trash. So people are already into Christmas and they skip over” Advent.

Peter Latona, director of music at the Basilica of the National Shrine of the Immaculate Conception in Washington, agrees, even though Advent is longer in duration than Christmas.

“People hear (Christmas) tunes and stuff like that on the radio, and they play it on the piano,” Latona said. “They just hear it so much more often.”

In a liturgical sense, though, “that’s not the case,” McMahon told Catholic News Service in a Dec. 3 telephone interview. “At the liturgy, people have a chance to take an Advent break.”

Not all are into the Advent season when it is Advent, though.

“I think there is a fear — ‘eschatophobia,'” a fear of the future, according to McMahon. “I made it up,” he said of the word, but not of the feeling: “We don’t like to dwell on the future. Because there’s uncertainty, there’s the unknown. Even though we’ve gotten the promise and we’ve got hope, those are a lot less tangible than the baby.”

McMahon, who said he spent the weekend of the First Sunday of Lent watching homily videos posted on Facebook, recalled one “where the Scriptures are very much focusing on the future. But, really, he zoomed that all the way back around to Christmas. People grab that; there’s a lot more safety to Christmas.”

Latona said Advent’s longing and expectation is often found in the music written for the season. “There’s quite a few texts that have a real reflection about them, about the end of time,” he told CNS. “It can be dramatic and poignant, too,” he added, but “it’s not necessarily happy music.”

He pointed to “Lo! He Comes With Clouds Descending,” written by 18th-century composers John Cennick and Charles Wesley, which “is not in the (Catholic) tradition but I use it anyway,” because “it resonates with Catholic identity, Catholic heritage, the patristic heritage of Catholic music, and that it’s appropriate to the season, appropriate to the point in the liturgy where it is to be sung.”

Latona called the hymn’s lyrics “a very moving text. Add to it a solid tune and it gives you goosebumps.” Asked if there was anything of a more recent vintage — since the Second Vatican Council — that he liked, Latona thought a bit and said, “Not off the top of my head.”

“There’s such a wealth of beautiful Advent music” both old and new, said Rick Gibala, music director of the Cathedral of St. Thomas More in Arlington, Virginia. While he finds “O Come, O Come Emmanuel” to be timeless, there is newer music, like Marty Haugen’s “My Soul in Stillness Waits.”

“When you hear that, it just feels like Advent,” he said. Gibala is also fond of Haugen’s “Awake! Awake, and Greet the New Morn.”

Gibala hailed a set of Advent Communion antiphons written by Russell Weismann, music director at Georgetown University in Washington, as “absolutely gorgeous. The liturgical readings are in three cycles that change every year, but the Communion antiphons are constant every year,” and he makes sure they are part of the season’s liturgical music programming. He’s also partial to his own composition “Advent Carol,” which he said was sung last year at Boston University’s service of lessons and carols.

Steve Petrunak, president of the National Association of Pastoral Musicians, said in his 43 years of music ministry, he never found Advent to be lacking.

“We wanted there to be a noticeable difference with the season of Advent. We quieted down, we perhaps looked to not heighten up things with lots of instruments, but pare it back a little bit,” Petrunak said. “This whole notion of waiting and a quietness was really something that we tried to instill within the season. I can’t say that my experience is one of Advent being overshadowed with Christmas. … We worked very hard to make Advent its own season of significance and importance.

The same, he added, is true with the music. “I did not struggle with finding good, appropriate music for it,” Petrunak said. “I think that ‘O Come, O Come Emmanuel’ is quintessential for the season, but I think there’s a rich tradition of music that is out there, that if you’re open to different styles and different types, there are some real gems, I believe, for Advent.”

PREVIOUS: In 2018, Catholics spearheaded efforts in response to climate change

NEXT: Amid church’s abuse crisis, music can unite the faithful, says composer