In 2018, Catholics spearheaded efforts in response to climate change 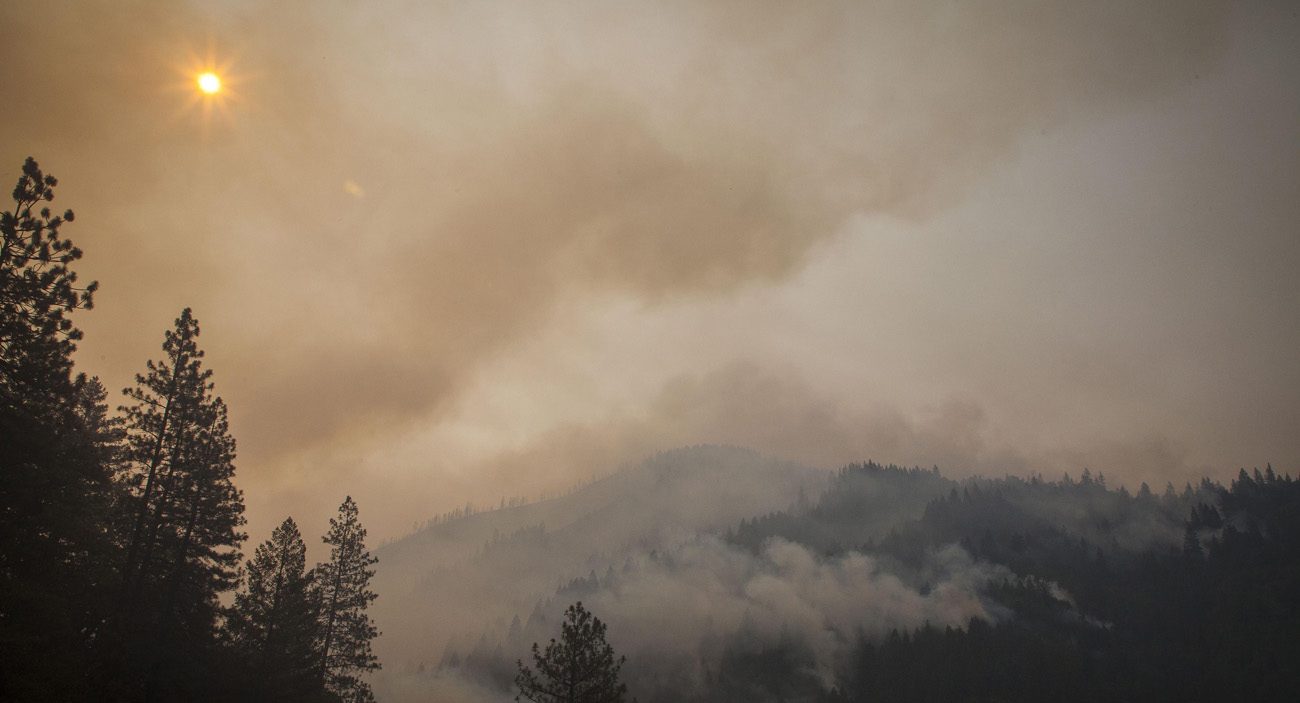 The sun peeks through the smoke and burned out trees during the Carr Fire in late July in the Whiskeytown Shasta-Trinity National Recreation Area near Redding, Calif. Catholic organizations in 2018 called for greater personal responsibility in tackling climate change. (CNS photo/Kelly Jordan, USA TODAY NETWORK via Reuters)

WASHINGTON (CNS) — Catholic organizations called for greater personal responsibility in tackling climate change and stepped up their advocacy in opposing the rollback of U.S. environmental regulations during the last year.

Their efforts held up Pope Francis’ 2015 encyclical, “Laudato Si’, on Care for Our Common Home,” which focuses on understanding how integrated human life is with all life on earth and the need to be responsible stewards of the planet’s resources.

In inviting Catholic entities to sign the declaration, Bishop Richard M. Pates, who heads the Diocese of Des Moines, Iowa, and is episcopal liaison for the effort, said the document serves as a “distinct Catholic expression” of the broader We Are Still In effort.

We Are Still In finds tribal leaders, government officials and organizations committing to address climate issues and following the Paris agreement despite the planned U.S. withdrawal.

The Trump administration has further vexed Catholic organizations through its two-year campaign to roll back environmental regulations. Their concern: The rollbacks are focused on helping industry boost profits at the expense of human health and safety and the environment.

Trump has said that his push to overturn some environmental and other regulations is motivated by concern the regulations have gone “overboard,” costing coal workers their jobs and hindering use of the country’s national resources. Some GOP congressional leaders as well as business leaders support the move.

Organizations such as the Washington-based Columban Center for Advocacy and Outreach have conducted webinars and developed educational materials about the consequences that experts project will stem from the rollbacks.

Through mid-November, at least 49 policies related to the environment have been enacted or proposed since Trump took office, according to Harvard Law School’s Environmental Regulation Rollback Tracker.

Such efforts on behalf of the environment illustrate the widespread support in the faith community for action to protect natural resources and to address climate change that emerged with new energy in 2018.

The prayerful determination of a Pennsylvania religious order to block the use of a natural gas pipeline that was built through its land was part of the groundswell for environmental action.

After months of legal challenges, the Adorers of the Blood of Christ asked the U.S. Supreme Court in October to decide whether their religious freedom rights were violated by the construction and pending use of the Atlantic Sunrise pipeline. In a court filing, attorney Dwight Yoder, representing the congregation, argued that the sisters’ rights under the Religious Freedom Restoration Act were disregarded by a federal appeals court.

The Adorers’ legal appeal came a month before a major scientific report compiled by 13 federal agencies warned that dire health and economic consequences are ahead if carbon emissions from the burning of fossil fuels are not reduced. Scientific research has pointed to the emissions as a primary cause of climate change.

Reacting to the report, several Catholic environmental experts told Catholic News Service the conclusions point to the need to put aside the desires of an individual or a single country in favor of steps that protect the common good.

In a step to confront the economic strength of fossil fuel companies, the Global Catholic Climate Movement announced twice during the year that Catholic institutions would divest from such firms.

Caritas Internationalis, the church’s worldwide network of humanitarian aid agencies, the Irish Catholic bishops’ conference and several religious congregations were among the organizations saying they would divest from oil and natural gas firms.

Tomas Insua, executive director of the Global Catholic Climate Movement, said Pope Francis has supported ethical investment. He cited the pope’s June address to executives of fossil fuel corporations and financial firms in which he urged them to embrace a new kind of leadership that believes in building the whole human family while protecting the environment and to use alternatives to carbon-based fuels to mitigate the effects of global warming.

In total, 122 Catholic entities have divested since 2016.

In other ways, Pope Francis continued to stress the importance of the protecting God’s creation, calling care and protection of Earth’s water resources “an urgent imperative” and access to safe drinkable water a “basic and universal human right” in his message Sept. 1, the World Day of Prayer for the Care of Creation.

His concerns for the environment were reflected in several statements and prayers at key times throughout the year.

The pope’s 2015 encyclical also was the focus of church activities worldwide in with parish programs and country-wide conferences, including a World Youth Day gathering in Ghana, where Cardinal Peter Turkson, prefect of the Dicastery for Promoting Integral Human Development, discussed the document.

The pope in July called on world governments to uphold commitments agreed upon in the Paris accord in an address to an international conference of indigenous and young activists, scientific experts, religious leaders at the Vatican. The conference was called to assess the impact of the encyclical and to discuss the best ways to act in promoting “integral ecology.”

While the U.S. moved ahead with its plan to withdraw from the Paris agreement, representatives from around the world gathered in Katowice, Poland, Dec. 2-14 to offer plans to meet their pledges to reduce greenhouse gas emissions.

Catholic groups in particular promised to bring the church’s voice to the 24th Conference of the Parties to the United Nations Framework Convention on Climate Change — known as COP24. The groups, including the 17 Catholic development agencies from Europe and North America that make up CIDSE, said growing interest in the Catholic Church as a moral leader and globally recognized authority will raise the profile of any statements member agencies make.

Cardinal Pietro Parolin, Vatican secretary of state, and Cardinal Turkson led a delegation from the Holy See to the meeting.