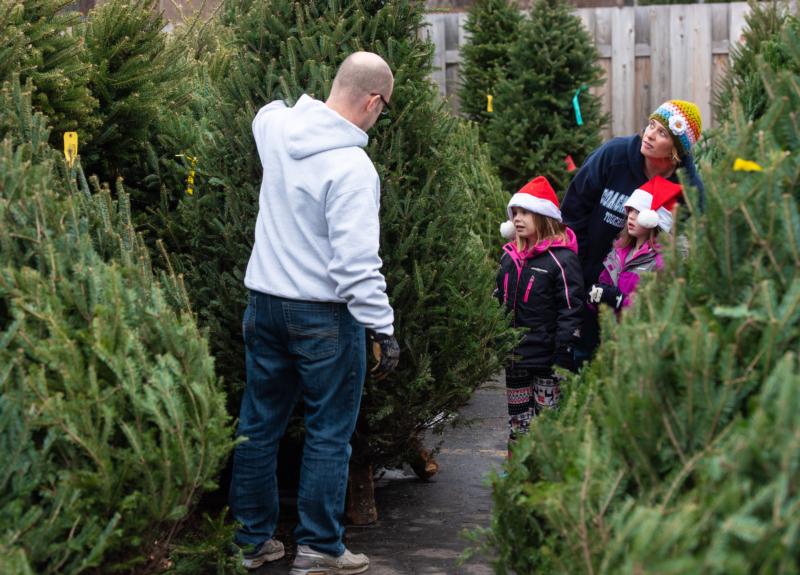 Gregg Michalski holds a Christmas tree for his wife, Joanne, and their daughters, Kendra and Paige, to examine at the Knights of Columbus Christmas tree lot in De Pere, Wis., Dec. 1. The Knights’ Abbot Pennings Council has been selling Christmas trees as a fundraiser since 1968. (CNS photo/Sam Lucero, The Compass)

DE PERE, Wis. (CNS) — There’s only one place in northeast Wisconsin where families can purchase a Christmas tree and get Tootsie Rolls in the bargain.

If the free Tootsie Roll isn’t enough incentive, knowing that your purchase goes to benefit charitable projects may sweeten the tree-buying decision.

Handing out Tootsie Rolls is nothing new for members of the Catholic fraternal service organization. Knights Tootsie Roll Drives, held to benefit people with intellectual disabilities, began in Wisconsin in 1973. In 2018, the program raised $726,736 statewide, according to the Wisconsin State Council.

On the other hand, selling Christmas trees for charity is not a common Knights’ fundraiser. Only a handful of Wisconsin Knights councils operate Christmas tree lots, and the De Pere council likely has the longest running operation. This year the council is celebrating five decades of selling trees.

“We start selling the day after Thanksgiving and stay open until all trees are gone,” John Mueller told The Compass, newspaper of the Diocese of Green Bay. “When we get down to the last 10 or 12 trees, then we just close up and donate those to St. Vincent de Paul. We also provide free trees when a family shows up and can’t afford one.”

According to Mueller, who has been involved in the Abbot Pennings Christmas tree fundraiser since the early 1980s, the project began in 1968, when council members drove to a tree farm, cut the trees and brought them back to De Pere. The first Christmas tree sale netted $375. The council sold about $11,000 worth of trees the first weekend of operation this year, he said.

The Knights continued cutting trees each year until the late 1970s or early 1980s, Mueller said, and then started buying trees from Willems Landscape in De Pere. “By 1985, we were selling 450 trees each year,” added Mueller told The Compass, newspaper if the Green Bay Diocese. “After the turn of the century, we began selling 800 to 900 trees each year.”

Today, the trees are purchased from North Countree Christmas of Wausaukee.

Many of the families who buy their trees from the De Pere Knights are repeat customers, said Mueller.

One key to the group’s successful enterprise is its volunteer force. About 150 people — council members and their families — work two-hour shifts all season. The lot is open seven days a week.

Many of the Knights even offer customers advice on their Christmas tree purchases.

“We basically have four different styles of trees,” said Mike Hannan. “We have the Fraser firs, a very popular, sturdy tree with needles that stay on the best. The Canaan fir is a great tree. It’s a little softer needle and people like that for ornaments. We have a traditional balsam tree and some people still like spruce.”

Proceeds from the Christmas tree sale support several ministries in the Green Bay Diocese, including programs and shelters for the homeless, transitional housing, outreach for victims of domestic abuse, a ministry to young families, Eagle Scout programs, the Retirement Fund for Religious collection, local Catholic schools, and seminarians and novices to religious life.

Some funds also go to the diocese’s World Mission Services for purchase of rosaries for the missions.