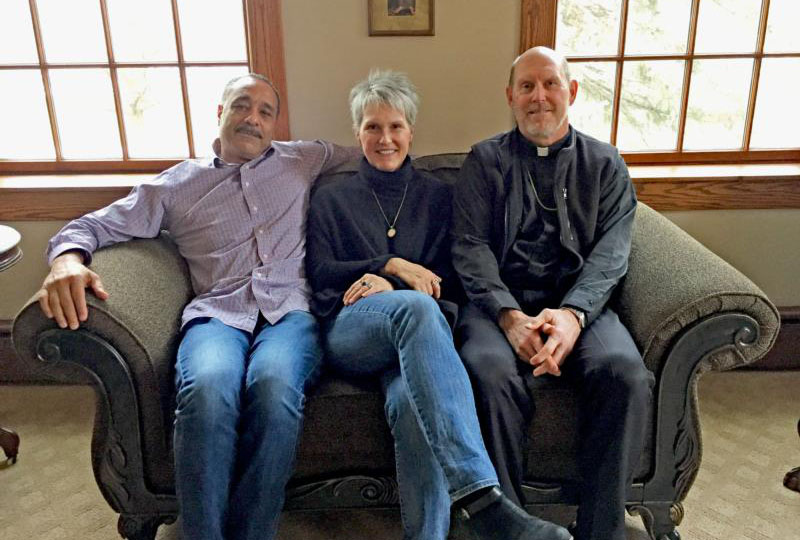 DAVENPORT (CNS) — As he and his brother bishops voted on a new pastoral letter on racism at their fall general assembly in Baltimore, Bishop Thomas R. Zinkula of Davenport reflected on how racism impacted his family in rural Iowa.

It got him to thinking about how Pope Francis encourages Catholics to “Share the Journey” with immigrants and refugees. Get to know their stories, change perceptions, the pope said. That message applies to other groups as well, Bishop Zinkula said.

“It’s one thing to talk about a problem. It’s another thing to meet real-life people and hear their stories. Our family’s story would be an example,” he told The Catholic Messenger, Davenport’s diocesan newspaper.

Their story begins in 1987 in Des Moines, about a two-hour drive from their hometown of Mount Vernon

The couple met in the office building where both worked at that time. Sharon’s eight siblings knew that she was dating someone who was black, but her parents, Robert and Mary Zinkula, did not. “Before my parents met Joseph, I wanted them to know that he was black.”

Sharon told them in the spring of 1988. Her dad took the news especially hard. She doesn’t remember specific details. But she remembers the unspoken message: “It wasn’t acceptable.” Sharon’s mom maintained her role as a supportive spouse. “It put my mom in a tough place. She was not one to go against him. They were a team. She handled it as graciously as she could.”

Throughout this ordeal, Sharon made visits home several times a year and came across articles addressed to her. “I’d find little news clippings … a white woman who went to Africa and was murdered … stories of domestic abuse, black on white. I wouldn’t say anything, but I thought, ‘There’s a lot of white on white domestic abuse.’ My siblings didn’t get articles like these.”

Her brother, the future bishop, was away at seminary. “I’d be home for Christmas and hear from the grapevine about what was going on,” Bishop Zinkula said. “I don’t recall my father ever showing emotion before … I don’t know if I’d ever seen him cry before. For him, this was the worst possible thing that could happen. He did not react well. I thought it could pull our family apart.”

Looking back, Sharon attributes her dad’s reaction to “pride and ignorance. Back in the ’80s, especially in small-town Iowa, if someone was dating a black person, it wasn’t something people were proud of.”

Sharon chose not to bring Joseph home. “I wouldn’t subject him to that,” she said.

“I remember receiving a letter from Tom during the period between telling Mom and Dad about Joseph and when they met him. Tom was spending the summer in New York at Covenant House. I think I wrote him because I was wondering if I was doing the right thing — or wanted reassurance I wasn’t doing anything wrong.

“From what I remember, he responded in typical Tom fashion. He didn’t take sides but rather offered differing perspectives. He also wrote a bit about what he was experiencing. I don’t remember the stories but I remember sensing a weariness or sadness on his part and thinking, ‘This is so petty compared to what he’s seeing and experiencing, but it’s so big to us.”‘

Bishop Zinkula remembers writing that letter. “I was kind of challenging her. Sharon is idealistic. … She cares about everybody and about social justice.” He wanted Sharon to think about her motives. Was she dating Joseph because of her world view or because she was attracted to him?

Sharon describes the experience as walking on a tightrope. “I felt like I had to be so careful with what I said or did or I could set something off. My family is so important to me; I didn’t want to lose that. But how could I live with myself if I broke up with Joseph just because he was black? My parents had never met him. All this reaction was to the color of his skin.”

Joseph, a college graduate who grew up in a housing project in Chicago, didn’t let the reaction of Sharon’s father bother him. “There was nothing I could do about it.”

A watershed moment occurred in November 1991, Sharon said. “My sister (Sandy) was getting married and she and her finance went up to Dad and Mom and said, ‘We’re inviting our friends to our wedding. We consider Joseph a friend. Do you have a problem with us inviting Joseph?” No, they did not.

“I was in the wedding party,” Sharon recalled. “I remember walking into the reception; I was with my little sister. We turned a corner and there was Joseph sitting with Mom and Dad and one of my brothers. I started freaking out. My little sister said, ‘Calm down; everything looks fine.’ From that point, he was accepted.”

Joseph remembers sitting at the table when Sharon’s parents came and sat down with him. “We started talking. It was a cordial conversation,” Joseph said. Her father asked what Joseph did for a living. “We shook hands and I hugged (Sharon’s) mother.”

Meeting Sharon’s dad, “I didn’t see any vibes of hostility,” Joseph said. They came to know each other well. “When I grew up, I didn’t get to know my father at all. I spent more time with Sharon’s father and talked with him more than with my own father.” The two had different views on issues, “but we were always cordial,” Joseph said. “He was a strong-willed person.”

Sharon and Joseph, who is not Catholic, married in a civil ceremony in 1995. A church ceremony took place in 1999, with her brother Tom, by then a priest, leading the service. It was the first time that “my dad and Joseph’s mother met. Joseph was really nervous about that,” Sharon said. But the in-laws got along well.

“After that it was like no big deal. Joseph was part of the family. It took many years to get to this place,” Bishop Zinkula said. The birth of Sharon and Joseph’s daughter, Lauren, now 18, also “softened things a bit,” he added.

Race will always be part of the equation for Sharon and Joseph. “We’ve been together for 30 years; the only thing I can say for certain after all of this time is that it’s impossible for me to know what it’s like to be black,” Sharon said.

“We’ve been to places, vacation spots, where it’s been very awkward for me,” said Joseph, who also has experienced racial profiling. Not long ago, he was pulled over while driving his Mercedes-Benz in a neighborhood near their Oak Park home. The officer thought Joseph was talking on his cellphone. But Joseph said he tries not to let incidents like that bother him. “I can’t change what people think.”

He believes the U.S. bishops’ new pastoral letter on racism is a very good thing; it’s a place to begin a conversation, Joseph said. “It all comes down to the realization that in America we don’t want to challenge ourselves, but we need to talk about it.”