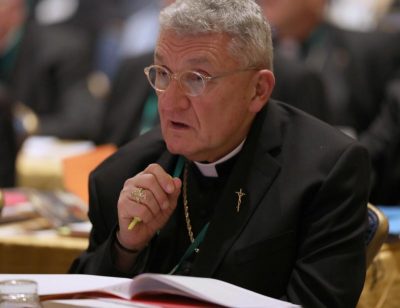 Bishop David A. Zubik of Pittsburgh looks over documents on sexual abuse for discussion Nov. 13 at the fall general assembly of the U.S. Conference of Catholic Bishops in Baltimore. (CNS photo/Bob Roller) .

PITTSBURGH (CNS) — Bishop David A. Zubik has introduced the independent experts who will run the Diocese of Pittsburgh’s new compensation program for survivors of clergy sexual abuse.

During a news conference Dec. 13 at the diocesan Pastoral Center in downtown Pittsburgh, the bishop announced the creation of the independent reconciliation and compensation program that will be administered by Kenneth Feinberg and Camille Biros, who are working on similar programs in the dioceses of New York and New Jersey and other areas of Pennsylvania.

Their task will be to invite abuse survivors to accept the terms of the program so they can receive money as soon as possible.

“The program will likely run from sometime in the latter part of January, next month, through Sept. 30 of 2019,” Feinberg said at the news conference. “During that period, Camille and I will work with victims and their counsel in an effort to process the claims quickly, with certainty and with compensation for those who are eligible.”

Feinberg is well known for his administration of compensation programs for victims of 9/11, terrorist attacks, the movie theater shooting in Aurora, Colorado, and the BP Deepwater Horizon oil spill.

In an opening statement, Bishop Zubik said the money to fund the program will not “come from ‘Our Campaign for the Church Alive!’ (or) from Catholic Charities, parishes, schools or any other funds designated for a specific use by donors. Nor have such funds been used in the past to compensate victims.”

He said the amount of money that will be made available is not known at this time, but it will come from diocesan investments, and “may very well need to come from the future sale of diocesan-owned, downtown properties.”

Feinberg said the program will cover cases of abuse by clergy of the Diocese of Pittsburgh that happened previously and were reported, and those cases that have never been reported. Claims of abuse by lay employees or clergy associated with a religious order will not be covered under the program, he said.

Biros said the program will begin with the diocesan victim assistance coordinator sending a letter to all known victims to invite them to participate in the program. Then compensation could be issued as quickly as 90 days, she said.

The keys to this type of compensation program, Feinberg said, are speed in issuing a claim, efficiency and certainty that the claim will be validated and compensated.

Anyone who chooses to accept the financial offer as part of the program waives their right to future litigation, Biros explained. But the agreement doesn’t bar the claimant from disclosing details of their claim, she said.

“We are grateful to the Diocese of Pittsburgh,” he said. “They’ve told us in clear terms, ‘We want to do the right thing, and we want you to independently do this.'”

Bishop Zubik explained that “the administrators of the program will have complete autonomy to determine eligibility of individual claims. They will also determine the amount of compensation for victims who come forward with a claim.”

But he added that the program is about more than just money.

“It is about recognizing the harm done by past abuse and of our continuing the pledge of taking every appropriate action to prevent the occurrence of future abuse. We believe that it is important for us to help survivors resolve their claims quickly,” the bishop said.

At the beginning of his statement, Bishop Zubik reviewed the efforts undertaken to address the clergy abuse crisis, such as the recent series of four listening sessions that he attended and the hiring of Shay Bilchik of Georgetown University to examine diocesan practices related to the protection of children and young people.

“I have promised to take what I have heard in these sessions, as well as the recommendations of Professor Bilchik, and present them in substantive plans of action that will be released in the form of a pastoral letter before March 6, the beginning of our Lenten season,” he said.

“Finally and most importantly, I again want to express my deep sorrow and regret for the pain inflicted upon survivors of clergy sexual abuse and their families. I can’t offer that apology enough.”