OMAHA, Neb. (CNS) — When the Archdiocese of Omaha released a list of 38 clergy with substantiated claims of sexual abuse or sexual misconduct with a minor, Archbishop George J. Lucas acknowledged the report “with sorrow” and said he knew it would “cause a great deal of pain and anger.”

“We’re deeply saddened so many innocent minors and young adults were harmed by the church’s ministers,” he said in a news release and letter to the faithful. “To victims and their families, I am sorry for the pain, betrayal and suffering you have experienced in the church.” 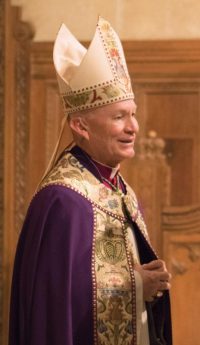 The list, released Nov. 30, is available at report.archomaha.org and in a format allowing text search at catholicvoiceomaha.com, includes clergy who had substantiated allegations of abuse of minors made against them since 1978.

When it was released to the public, the list also was submitted to Nebraska Attorney General Doug Peterson along with investigative documentation on the cases, responding to his September request for information from all three Nebraska dioceses concerning such allegations after clergy sex abuse scandals surfaced from around the country.

It includes 24 priests of the archdiocese, 10 from other states, countries or religious orders serving in the archdiocese, and four deacons. Some reported incidents date back as far as 1956.

The list will be updated if future substantiated allegations are received.

In collaboration with the Archdiocesan Review Board, the Omaha Archdiocese reviewed all current clergy assignments to ensure appropriate placement of priests and deacons.

“There’s nobody currently serving in ministry who has a substantiated allegation of abuse of a minor,” the archbishop said.

Father Scott Hastings, vicar for clergy and judicial vicar for the archdiocese, said substantiated allegations are those where investigation uncovered evidence or supporting information that led the archdiocese to believe the claim.

“Anyone who is on that list will know they are on the list” and would have been informed of the allegation at the time, he said. “We’re not sending in any claims that we have not acted on.”

The names of clergy who were deceased or retired at the time of the accusations were not made public then, he said. Only claims against those who were involved in active ministry were released at the time of those allegations, so the public may be seeing some claims for the first time.

“The attorney general also asked us for any investigative documents for any behaviors with minors or young adults such as grooming or inappropriate communications,” Father Hastings said.

In 2002, the U.S. Conference of Catholic Bishops adopted a “Charter for Protection of Children and Young People” in response to a priest sexual abuse scandal in the Boston archdiocese and other dioceses that gained national attention. It includes guidelines for helping victims, establishing accountability and preventing future acts of abuse.

The Omaha Archdiocese implemented the charter in 2002, which included training and background checks for clergy and laity working with young people, and safe environment training for children. The archdiocese has been in compliance with the charter each year, according to annual audits by independent organizations.

Soon after, the archdiocese also established the Office of Victim Outreach and Prevention to provide pastoral care and support to victims of abuse and hired Mary Beth Hanus as its manager and victim advocate.

Transparency is important, Father Hastings said. The report is an acknowledgment of victims and “gives us a firm place from which to move forward,” he said.

The archbishop said, “This is part of our effort to be transparent about transgressions that have happened in the past and to take responsibility for them as a church.”

“My hope is that this will be a help to victims,” he told the Catholic Voice, Omaha’s archdiocesan newspaper. “It’s an opportunity for them to know they’ve been heard, and for those who have not shared their story with us about an incident of abuse, that they can come forward and be heard and be helped.”

“People want a resolution of this so we don’t have to deal with this issue again,” he said.

He said he has tried to convey a message of hope to his parishioners.

On Nov. 4, the feast of St. Charles Borromeo, Father Loseke used the Gospel reading about the Good Shepherd during Mass. He spoke in his homily about what it means to be a good shepherd and held his parish’s patron up as an example for our time.

St. Charles Borromeo, who lived during the Protestant Reformation, worked to rid the church of corruption and restore integrity, and influenced church reform during the final years of the Council of Trent.

“What we’re going through today is not much different from what St. Charles Borromeo was going through 500 years ago when he was reforming seminaries, calling priests to greater fidelity and getting his brother bishops in line,” Father Loseke said.

Father Loseke said he has personally “lived in a fishbowl” since his ordination, but people are now even more aware of priests’ behavior because of the media attention given the scandal.

“I’ve had people comment that they notice the care I take and how much space I allow when I’m working with young people,” he said. “People are watching.”

Father Damian Zuerlein, pastor of St. Frances Cabrini Parish and president of All Saints School, both in Omaha, said the sex abuse scandal has put all priests under greater scrutiny.

Despite messages of support and concern from his parishioners, he said, “it’s a tough time to be a priest.”

People are angry that those who were abusing young people were not removed from ministry, he said. “They want to know they can trust the church and their priests.”

To that end, Archbishop Lucas promised higher standards of conduct for clergy, greater transparency in resolving cases of clergy misconduct and zero tolerance for anyone believed to have been credibly accused of mistreating a child or vulnerable adult.

The archbishop said he is committed to looking at the placement of all priests to ensure they are meeting the rightful expectations of the church and of society.

NEXT: Outside experts named to run Pittsburgh Diocese’s survivors fund