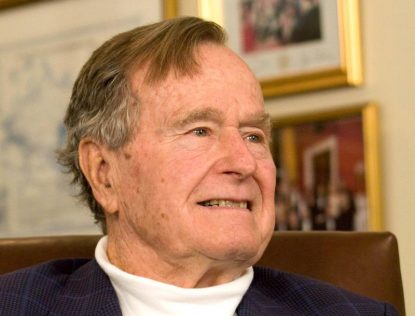 WASHINGTON (CNS) — When he was running for re-election in 1992, President George H.W. Bush told Catholic News Service that he believed that a strong religious faith could provide “an extra shot of strength when you need it.”

“I don’t believe you can be president without having faith. I really strongly feel that,” Bush said in a telephone interview that October as he flew en route from a campaign appearance in Kentucky to scheduled stops in Florida.

That religious faith which sustained him and his family and was clearly evident during his years in the White House — and more recently as he mourned the April 17 death of his beloved wife of 73 years, Barbara — is being noted by many in paying tribute to his life and legacy after his death late Nov. 30 at age 94 at his home in Houston.

His spokesman, Jim McGrath, confirmed the death of the former president in a tweet. The cause of his death was not immediately available, but he had been in failing health the last few years. In 2012, he announced that he had vascular Parkinsonism, a condition that limited his mobility and required him to use a wheelchair most of the time.

“Jeb, Neil, Marvin, Doro and I are saddened to announce that after 94 remarkable years, our dear Dad has died,” said former President George W. Bush, the late president’s oldest son. “George H.W. Bush was a man of the highest character and the best dad a son or daughter could ask for. The entire Bush family is deeply grateful for 41’s life and love, for the compassion of those who have cared and prayed for Dad, and for the condolences of our friends and fellow citizens.” 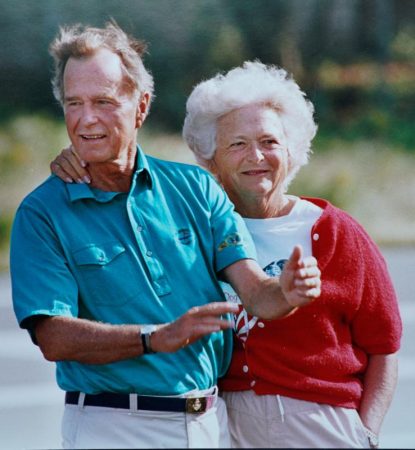 The White House announced Dec. 1 that a state funeral was being arranged “with all of the accompanying support and honors.” President Donald Trump designated Dec. 5 as a national day of mourning. He and first lady Melania Trump planned to attend the funeral at the National Episcopal Cathedral in Washington. The flags at the White House were lowered to half staff.

Air Force One, technically called “Special Air Mission 41,” flew to Houston to bring the body of the late president back to Washington. After arrival at Joint Base Andrews just outside Washington late in the afternoon Dec. 3, his body was to be transported to the U.S. Capitol Rotunda to lie in state through the early morning of Dec. 5. The public was invited to pay respects beginning Dec. 3 at 6:30 p.m. EST through Dec. 5 at 7 a.m. The funeral service was planned for 11 a.m. at the cathedral.

The final “Special Air Mission 41” flight was to return the president’s body to Texas late Dec. 5 for funeral services the next day in College Station, Texas. He will be laid to rest the afternoon of Dec. 6 at the George H.W. Bush Presidential Library, where wife Barbara and their daughter Robin, who died at age 3, are buried.

Catholic leaders, including the U.S. Conference of Catholic Bishops, joined in “grieving the loss of one of our nation’s leaders.”

“We remember with gratitude this great man who spent his life selflessly in service of his country,” the president of the U.S. Conference of Catholic Bishops said Dec. 3. “With an unwavering commitment to building bridges of peace and ensuring our nation’s freedoms, he also inspired many as a devoted husband, father and family patriarch.”

“On behalf of my brother bishops of the United States, we pray for the repose of the soul of our 41st president as we remember a life well lived,” said Cardinal Daniel N. DiNardo, who heads the Archdiocese of Galveston-Houston. “We also offer our deepest sympathy and prayers for his bereaved family and all those who mourn his passing. May you find peace and comfort in the consoling love of Jesus Christ.”

“Notre Dame joins with our nation and world in mourning the passing of President Bush,” said Holy Cross Father John I. Jenkins, president of the Catholic university in South Bend, Indiana. “He was the epitome of a public servant, not just in the Oval Office, but in his eight years as vice president, his many years as a congressman, ambassador and CIA director, and in his service in the U.S. Navy during World War II.”

“We were fortunate to host him at Notre Dame on five occasions, and in each instance, the honor was ours,” said Father Jenkins said in a Dec. 1 statement. “Our prayers are with the Bush family.”

Bush received an honorary doctor of laws degree from Notre Dame in 1992; he had visited the campus more than any other U.S. president.

Holy Cross Father Edward A. Malloy was Notre Dame’s president from 1987 to 2005 and presented the honorary degree to Bush during commencement ceremonies that year. He also worked on two of the president’s major initiatives — his Drug Advisory Council and his Points of Light Foundation.

“I found him to be a leader deeply committed to the country he had been elected to serve, a gracious host and a down-to-earth person,” Father Malloy said in a statement. “He recognized the importance of American higher education and he sought to enhance it. He also sought to promote a culture of citizen engagement with the great issues of the day.”

The National Right to Life Committee, a federation of state right-to-life affiliates and more than 3,000 local chapters, also mourned Bush’s death and praised him for a number of pro-life measures he supported as president.

It cited among other actions his administration urging the Supreme Court to overturn Roe v. Wade and allow states to pass laws to protect unborn children. He used “the power of his veto to stop 10 bills that contained pro-abortion provisions, including four appropriations bills which allowed for taxpayer funding of abortion,” NRLC said in a statement.

“President George H.W. Bush dedicated his administration to advancing pro-life policies to protect mothers and their unborn children,” said Carol Tobias, president of National Right to Life. “He used his presidency to stop enactment of pro-abortion laws and promote life-affirming solutions. Our prayers today are with former President George W. Bush and the entire Bush family.”

While in office, Bush stated that the “protection of innocent human life — in or out of the womb — is certainly the most compelling interest that a state can advance,” she added.

With regard to capital punishment, Bush differed with the Catholic Church’s opposition to the death penalty, telling CNS that he supported it “in certain instances because I think if somebody murders a police officer that that person ought to pay with his life.”

Bush was criticized by Catholic and other faith leaders as well as peace activists for his decision to go to war in the Persian Gulf after then-Iraq President Saddam Hussein invaded Kuwait.

Some months before the U.S.-led war began Aug. 2, 1990, St. John Paul II pleaded for peace in the Gulf. “May leaders be convinced that war is an adventure with no return,” he said. “By reasoning, patience and dialogue with respect to the inalienable rights of peoples and nations, it is possible to identify and travel the paths of understanding and peace.”

Attending the funeral of the pope in 2005, then-former President Bush recalled for reporters how the pontiff had opposed the war, which ended Feb. 28, 1991, citing what he called the pope’s “standard position on the use of force” and his concerns about “the long length of the war.” One news account said Bush “lamented the fact that he (himself) never engaged in a discussion about the concept of a ‘just war.'”

During his pontificate, St. John Paul met with Bush twice at the Vatican, first when Bush was vice president and then when he was president.

“I had the opportunity to express my profound gratitude to the Holy Father for his spiritual and moral leadership,” Bush said in a statement after the two leaders met privately for more than an hour Nov. 8, 1991.

“His message for peace and the message that he sends across the world to all these countries” experiencing war and other hardships “is a message of hope and, indeed, a message of peace,” the president said.

Born in Milton, Massachusetts, June 12, 1924, Bush delayed entrance to Yale University to volunteer for service in World War II. At 18. he was one of the Navy’s youngest pilots. After several flying successful bombing missions, he was shot down during one in 1944 and was rescued at sea. The rest of his flight crew perished.

After graduating from Yale, he became an oilman in Texas, but after his successful stint in the oil fields, he spent most of the rest of his life in public service — including as a two-term congressman from Texas, director of the Central Intelligence Agency, an ambassador, vice president under President Ronald Reagan (1980-1988) and finally president (1988-1992).

He and Barbara married Jan. 6, 1945. As a young couple they suffered through the death from leukemia of daughter Robin at age 3. Throughout their lives they and their whole family mourned her loss. Bush is survived by son George W., the nation’s 43rd president, and four other children; 17 grandchildren and eight great-grandchildren; and two siblings.

“We are guided by faith,” Bush said of his wife and family in that 1992 interview with CNS. “We (are) regular attendees at church and that gives us strength every Sunday. And we just feel that it’s important as a family to pray together. We still say our blessings at our meals and we still say our prayers at night.”
***
Carol Zimmermann contributed to this story. 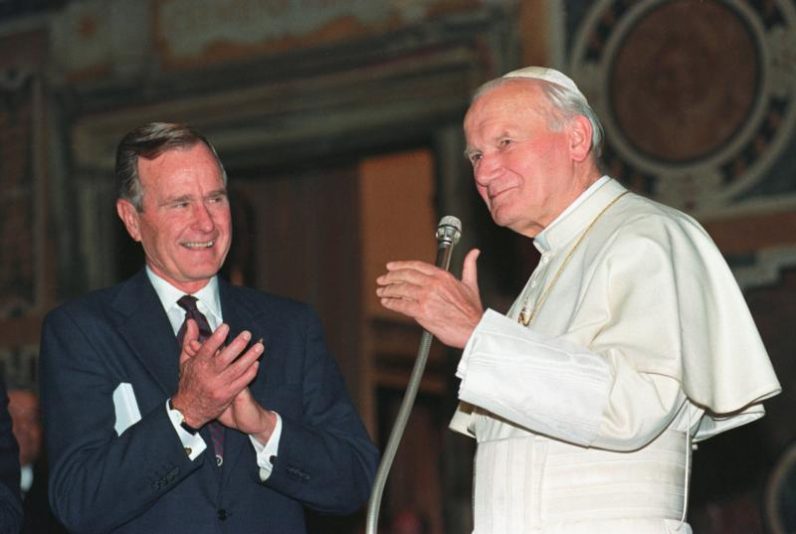 U.S. President George H.W. Bush applauds St. John Paul II after a welcoming ceremony prior to their audience at the Vatican in 1991. Bush, the 41st president of the United States and the father of the 43rd, died Nov. 30 at his home in Houston. He was 94. (CNS photo/Rick Wilking, Reuters)

PREVIOUS: In response to global warming, the idea of personal sacrifice resurfaces