U.S. bishops, others mourn death of Guatemalan girl near border 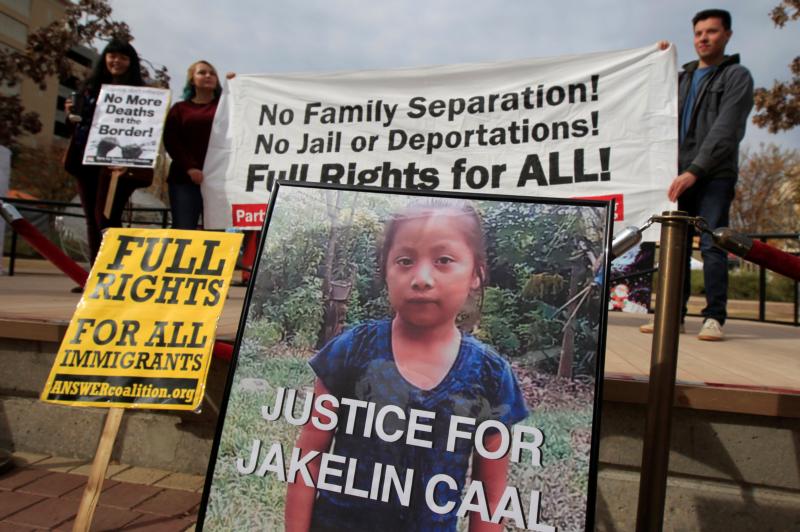 A picture of Jakelin Caal, a 7-year-old girl who died in U.S. custody after crossing illegally from Mexico to the U.S, is seen during a Dec. 15 protest held in El Paso, Texas, to demand justice for her. (CNS photo/Jose Luis Gonzalez, Reuters)

UPDATED – WASHINGTON (CNS) — Three U.S. Catholic bishops Dec. 18 joined their voices in mourning the death of a 7-year-old Guatemalan girl shortly after she crossed the U.S.-Mexico border with her father and they turned themselves in to U.S. Customs and Border Protection seeking asylum.

The girl, who was identified by the Guatemalan government as Jakelin Caal, died the first week of December.

“Our prayers and heart-felt condolences go out to Jakelin’s family. The death of a child is always a moment of great sadness, a jarring disruption of the natural order of life,” the bishops said in a joint statement.

“From this tragedy, we must remember this profound human consequence of our failed immigration policies, including also that restrictions on the flow of asylum seekers at the border can push more families to seek entrance between ports of entry which place them at greater risk,” they said.

The statement was issued by Bishop Joe S. Vasquez of Austin, Texas, who is chairman of the U.S. bishops’ Committee on Migration; Bishop Mark J. Seitz of El Paso, Texas; and Bishop Gerald F. Kicanas, administrator of the Diocese of Las Cruces, New Mexico.

“Jakelin’s death is a tragic reminder of the desperate situation that many fleeing violence, persecution, and poverty face — both in their home countries and now at our border,” they said.

The Washington Post reported that the girl and her father, Nery Caal, 29, were taken into custody Dec. 6 around 10 p.m., south of Lordsburg, New Mexico. They were among 163 migrants who turned themselves in at the border.

“Some seven hours later, she was put on a bus to the nearest Border Patrol station but soon began vomiting (and having seizures). By the end of the two-hour drive, she had stopped breathing,” the Post reported. Border Patrol agents administered CPR and she was flown to a hospital in El Paso, Texas, where she later died.

Officials said the girl initially appeared healthy and that an interview raised no signs of trouble, according to the news story. Her father, who was described as Spanish-speaking in initial accounts, signed a form indicating she was in good health, authorities said.

Critics of the Border Patrol and the Trump administration said later that the girl’s father speaks a Mayan dialect that officials supposedly didn’t really understand.

The National Council of Churches said the child’s death “represents an egregious disregard for the safety and care of persons in the custody of U.S. officials.”

The Washington-based organization said it joined “in prayer for this girl’s family members who grieve her loss.

“We also pray for all of those making the treacherous journey across the desert and are reminded of Abraham, Sarah, Mary, Joseph and countless others who made similar journeys in the light of hope,” it said in a statement issued Dec. 14, the day news reports circulated about the girl.

The inspector general’s office in the Department of Homeland Security said Dec. 14 it would investigate the circumstances of the child’s death.

The three Catholic bishops said they welcomed such an investigation, adding: “We recognize the work and commitment of CBP officers to ensure our safety, but urge CBP leadership to critically review policies regarding the care of vulnerable populations in their custody. We pledge our assistance to help CBP do so.”

In an interview on Fox News, DHS Secretary Kirstjen M. Nielsen called the death of the girl “heart-wrenching.” “And my heart goes out to the family, for all of DHS,” she said. “This is just a very sad example of the dangers of this journey. This family chose to cross illegally.”

“What happened here is that they were 90 miles away from where we could process them. They came in such a large crowd that it took our Border Patrol folks a couple times to get them all,” she continued. “We gave immediate care. We’ll continue to look into the situation. But again, I cannot stress how dangerous this journey is when migrants choose to come here illegally.”

In its statement, the National Council of Churches urged Congress to take up comprehensive immigration reform and called on President Donald Trump “to end policies that place persons in harm’s way as they seek relief from the circumstances that caused them to leave their home countries.”

“As we approach Christmas it is heartbreaking to consider there are many thousands of families in desperate need of the assistance of our nation,” the council added.

Bishops Vasquez, Seitz and Kicanas echoed that sentiment, saying that in celebrating Christmas “and the birth of Jesus, himself a child whose parents were told ‘there is no room,’ we continue to recognize and affirm that seeking asylum and protection is legal.”

“As a nation, we have the obligation to receive distraught individuals and families with welcome, compassion and humane treatment,” they added.