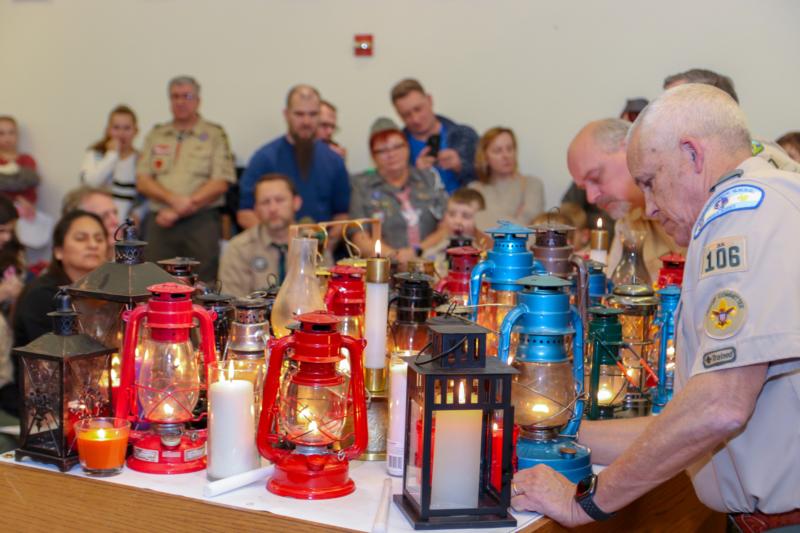 Scouting advisers light dozens of lanterns and candles with the Peace Light, a flame kindled in Bethlehem, West Bank, where Christ was born, at the Our Lady of the Skies Chapel in the John F. Kennedy International Airport in New York City Dec. 1. Volunteers form a network to drive the flame thousands of miles and light lanterns from coast to coast. (CNS photo/courtesy Michael Moscicki)

LAFAYETTE, Ind. (CNS) — Brian Duane’s maroon Subaru had already covered about 1,800 miles when he pulled into the parking lot at the Cathedral of St. Mary of the Immaculate Conception in Lafayette Dec. 4.

It was Duane’s 18th stop in what would be a weeklong, cross-country journey for the resident of Pembroke, Massachusetts, and his car contained precious cargo with a radiance of goodwill.

This road trip was a mission from Bethlehem carrying a message of peace, contained in a glowing lantern.

This fire had originally been kindled at Christ’s birthplace, the Grotto of the Nativity in Bethlehem, West Bank. Duane is part of a national network of volunteers spreading this “Peace Light from Bethlehem” across the nation.

“It is symbolic of Christ’s love for us and of the Prince of Peace,” Duane told Catholic News Service. “It serves as a reminder to us.”

For more than a decade, volunteers like Duane have driven this flame from coast to coast, lighting hundreds of lanterns along the route.

The effort to spread the Peace Light is spearheaded by Scouts and Scouting advisers, most often associated with Catholic churches.

The goal is to kindle peace in all hearts by remembering Christ’s mission began in Bethlehem.

“It’s symbolic, but it’s the effort, the coming together, the dedication to peace and heading home and spreading the message, even at the family level,” said Bob McLear, who lives west of Chicago.

McLear planned to take the light from Lafayette back to his parish in Batavia, Illinois, and pass it off to another volunteer headed to Madison, Wisconsin. 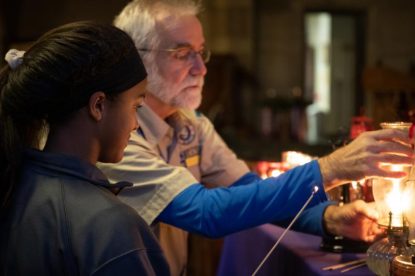 At Our Lady of Lourdes Church in Indianapolis, Karmin Shaw, a student at Our Lady of Lourdes Catholic School, watches as Brian Duane adjusts her lantern Dec. 4 after it had been ignited with the Peace Light, a flame kindled from the place in Bethlehem, West Bank, where Christ was born. Duane is part of a network of volunteers distributing the fire across the country and drove the light from New York City as far west as Denver. (CNS photo/Katie Rutter)

The Peace Light’s journey can be traced back to a tradition in Austria. For the past 32 years, the Austrian Broadcasting Corporation ORF has sent a child to Bethlehem to kindle a flame from the oil lamps hanging above Christ’s birthplace.

The fire, stored in two explosion-proof miner’s lanterns, is then flown with a safety adviser back to Europe, where it is spread to more than 30 countries.

“The reaction of the people touched my heart,” said Wolfgang Kerndler, a security expert for Austrian Airlines, who has escorted the flame for about two decades.

“Even the crew is proud to be part of the operation,” Kerndler told CNS in an email. “It’s an honor.”

The Peace Light first arrived in the United States in the wake of the terrorist attacks on 9/11. The Austrian government and national Scouting association sent the flame with a VIP delegation to comfort the grieving nation.

“It was a great sign of kindness from the people of the world,” he told CNS in a phone interview from New York City.

The light has been flown by Austrian Airlines to New York every year since. Stanton helps to organize the official reception at John F. Kennedy International Airport.

This year, about 150 adults and children gathered at the airport’s Our Lady of the Skies Chapel to welcome the light of peace and kindle their own flames.

“The youth are needing to know that there is hope, but they also need to know if there is going to be a better world, it will start with them,” Stanton said.

Duane was at the chapel to light his lanterns and begin his journey.

From New York, he drove as far west as Denver, before heading back to Massachusetts, logging more than 54,000 miles.

Along the way, Duane stopped at 26 locations to meet volunteers, participate in ceremonies and pass on the flame.

“I’ve walked into so many different places, a very liberal congregation, a very conservative congregation,” he said, “and yet we all agree on the need for peace and civility.”

Duane arrived in Indianapolis Dec. 4 where more than 60 people, mostly children, gathered at Our Lady of Lourdes Parish to welcome him and spread the flame from Bethlehem. Lanterns and candles lined the altar.

“I think that it’s really beautiful and I’m really happy that we came,” said Eliza Frank, a student at Our Lady of Lourdes Catholic School.

“We hear about Jesus being born in Bethlehem, but we never actually see anything from there or go there, so I thought that was really cool,” Frank said.

When Duane arrived at the Cathedral of St. Mary of the Immaculate Conception in Lafayette later that evening, nearly 100 Scouts and parents were present to spread the light. Even the youngest were challenged to share the flame with at least three other people in their local community, spreading hope and peace in the process.

“To the people out there that don’t have a chance to get the peace light,” said John Niemann, an Eagle Scout and student at Purdue University, “you can still hold Christ’s peace in your heart throughout this Christmas season and really strive to have that, even though you can’t physically have the flame with you.”

The Peace Light was set to reach California by Dec. 13 and is reported to burn in more than 30 states.

A Facebook page set up by volunteers mapped out the spread of the Peace Light and continues to field requests from individuals wishing to take the flame to their own communities.

In most cases, the lanterns lit by the Peace Light will illuminate congregations and homes through the Christmas season. Duane hopes that those lights serve as a constant reminder that small actions, like small lanterns, have the power to light a darkened world.

“We sometimes feel overwhelmed when there’s major conflicts going on in the Middle East or wherever it happens to be,” Duane said.

“Like, what can I do? Well, I can be kind and gentle to my family, my neighbors, the lady at the store, everybody else. Be a vehicle of peace, be a vessel of peace,” he said. 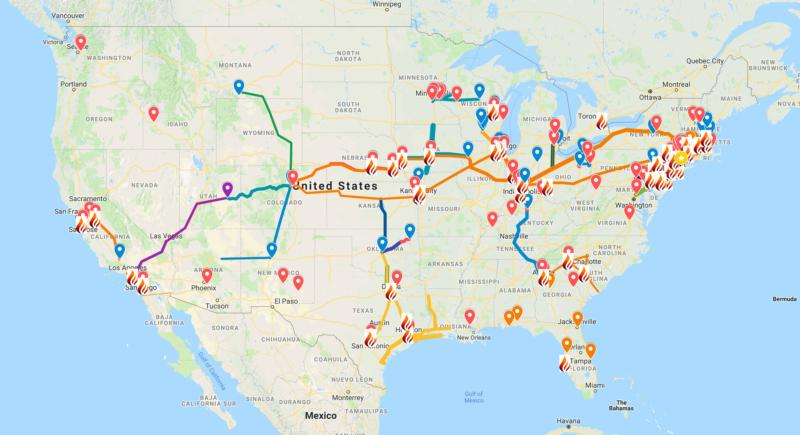 A screenshot of the current U.S. route, locations and planned distribution ceremonies of the Peace Light is shown in this Dec. 10 photo. The light is a flame originally kindled from Bethlehem, West Bank, where Christ was born. It was to New York City Dec. 1 and is being distributed by volunteers across the country. (CNS photo)

NEXT: U.S. bishops move to address allegations of abuse, claims of cover-up