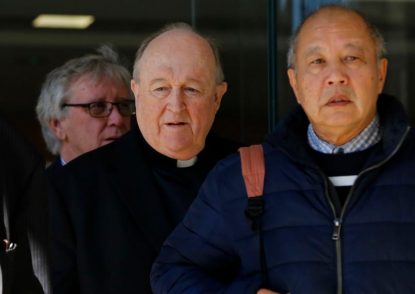 NEWCASTLE, Australia (CNS) — An Australian judge overturned the conviction of Archbishop Philip Wilson, whom a lower court found guilty of failing to report allegations of child sexual abuse by a priest.

New South Wales District Court Judge Roy Ellis ruled Dec. 6 that there were reasonable doubts about Archbishop Wilson’s conviction, which was handed down by a lower court in Newcastle in May.

The archbishop, 68, was the highest-ranking church official to be found guilty of abuse-related charges stemming from the actions of clergy. During his trial, Archbishop Wilson consistently denied knowing that the priest had abused boys in the 1970s.

Ellis said that suspicion of a crime did not substitute for proof beyond a reasonable doubt.

Defense attorneys argued that evidence pointing to the archbishop’s knowledge of the alleged abuse was circumstantial and that he was innocent of the charge filed against him.

In July, Archbishop Wilson resigned from his duties in the Adelaide Archdiocese after being sentenced to one year of house arrest.

He subsequently appealed his conviction, leading to the Ellis ruling.

Ellis also dismissed an appeal by a New South Wales prosecutor who argued against the leniency of Archbishop Wilson’s home detention sentence. The archbishop had faced up to two years in jail when he was sentenced.

The Newcastle court found that, in 1976, then-Father Wilson had been told by a 15-year-old boy that he had been indecently assaulted by a priest, but that Father Wilson chose not to go to the authorities despite believing the allegations were true. Father James Fletcher, the abusive priest, was convicted in 2004 of nine counts of child sexual abuse and died in jail in 2006.

Archbishop Wilson, who was appointed to the Adelaide Archdiocese in 2001, had been diagnosed with early stages of Alzheimer’s disease shortly before his trial. Throughout the court proceedings, he testified that he had no memory of the conversation with the 15-year-old.