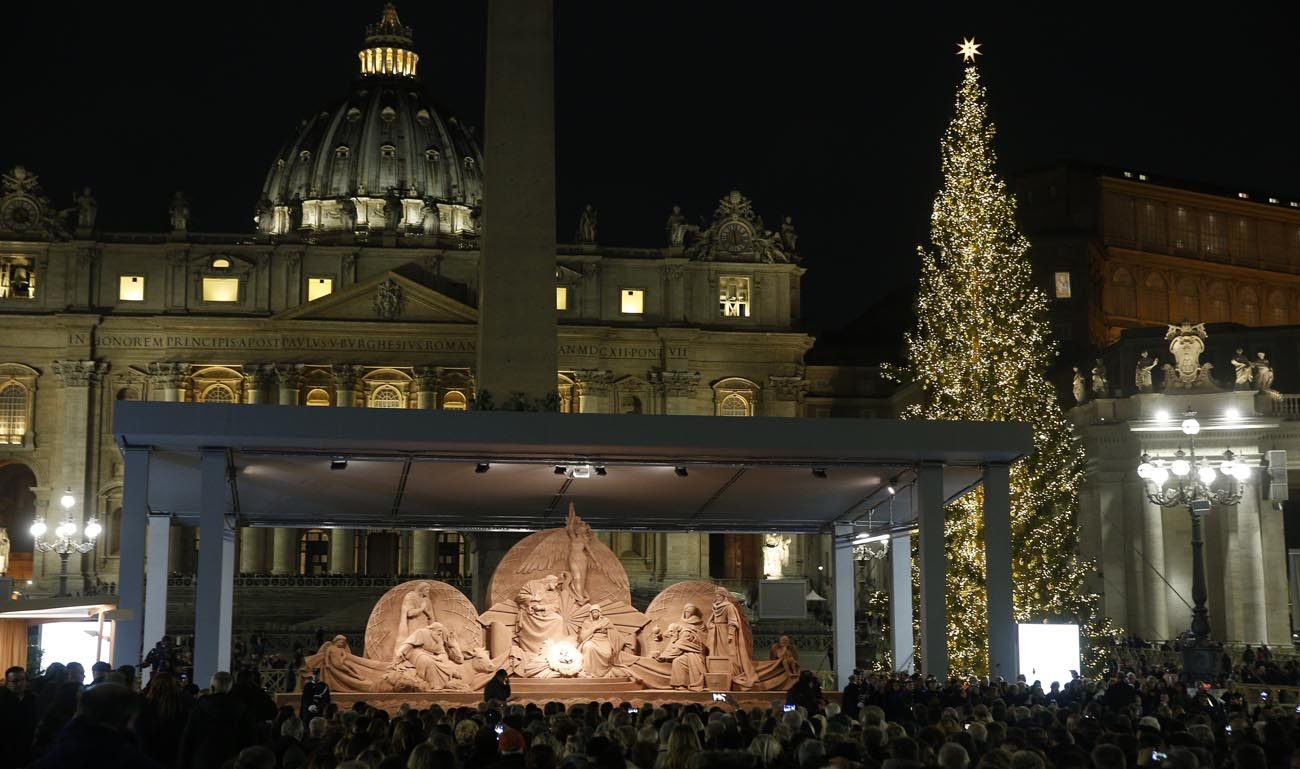 The Christmas tree and "Sand Nativity" are seen after a tree-lighting ceremony in St. Peter's Square at the Vatican Dec. 7. (CNS photo/Paul Haring)

The bas-relief sculpture, which weighed over 700 tons, was made with sand from Jesolo, an Italian seaside resort town roughly 40 miles north of Venice.

Shortly after, as the sun set behind St. Peter’s Basilica, the sounds of “Silent Night” filled the square before the lights of the Vatican’s towering Christmas tree were lit.

The 42-foot-tall red spruce tree, donated by the Diocese of Concordia-Pordenone in the northern Italian region of Veneto, was unveiled at the Vatican’s annual tree lighting ceremony.

Among those present at the annual Christmas tree lighting were Cardinal Giuseppe Bertello, president of the commission governing Vatican City State; Archbishop Francesco Moraglia, patriarch of Venice; and Bishop Giuseppe Pellegrini of Concordia-Pordenone.

The “Sand Nativity” scene and tree will remain in St. Peter’s Square until the feast of the Baptism of the Lord Jan. 13.

Earlier in the day, Pope Francis met with delegations from the northern Italian regions of Veneto and Friuli-Venezia Giulia, responsible respectively for the 2018 Vatican Christmas tree and Nativity scene.

Thanking the delegations for their gifts, the pope said the Nativity scene and Christmas tree are visible signs that “help us to contemplate the mystery of God, who was made man in order to be close to us.”

The bright lights emanating from the Christmas tree, he explained, “remind us that Jesus is the light of the world, the light of the soul that drives out the darkness of enmity and makes room for forgiveness.”

The soaring height of the Christmas tree, he added, also symbolizes “God who — through the birth of his son, Jesus — came down to man to raise him to himself and elevate him from the fog of selfishness and sin.”

Pope Francis also reflected on the unique composition of the Nativity scene. Sand, he said, is a poor material that “recalls the simplicity, the littleness and frailty with which God show himself through the birth of Jesus in the precariousness of Bethlehem.”

“The child Jesus, Son of God and our Savior, whom we lay in the manger, is holy in poverty, littleness, simplicity and humility,” the pope said. “By contemplating the God-child who emanates light in the humility of the manger, we, too, can become witnesses of humility, tenderness and goodness.”

Kicking off preparations to celebrate the birth of Christ was special exhibition in the morning of over 100 different Nativity scenes at the Vatican. The event, now in its 43rd edition, was sponsored by the Pontifical Council for Promoting New Evangelization.

In a statement promoting the event, Archbishop Rino Fisichella, president of the pontifical council, said the exhibition of different Nativity scenes — a tradition credited to St. Francis of Assisi — was “a strong instrument of evangelization.”

“So many people stop every Christmas before the mystery of God made man, represented with figurines — which in many cases are authentic masterpieces of art — to pray, to reflect and to discover the love of God who became a child for us.”