Do not be afraid of crises, pope tells Jesuits 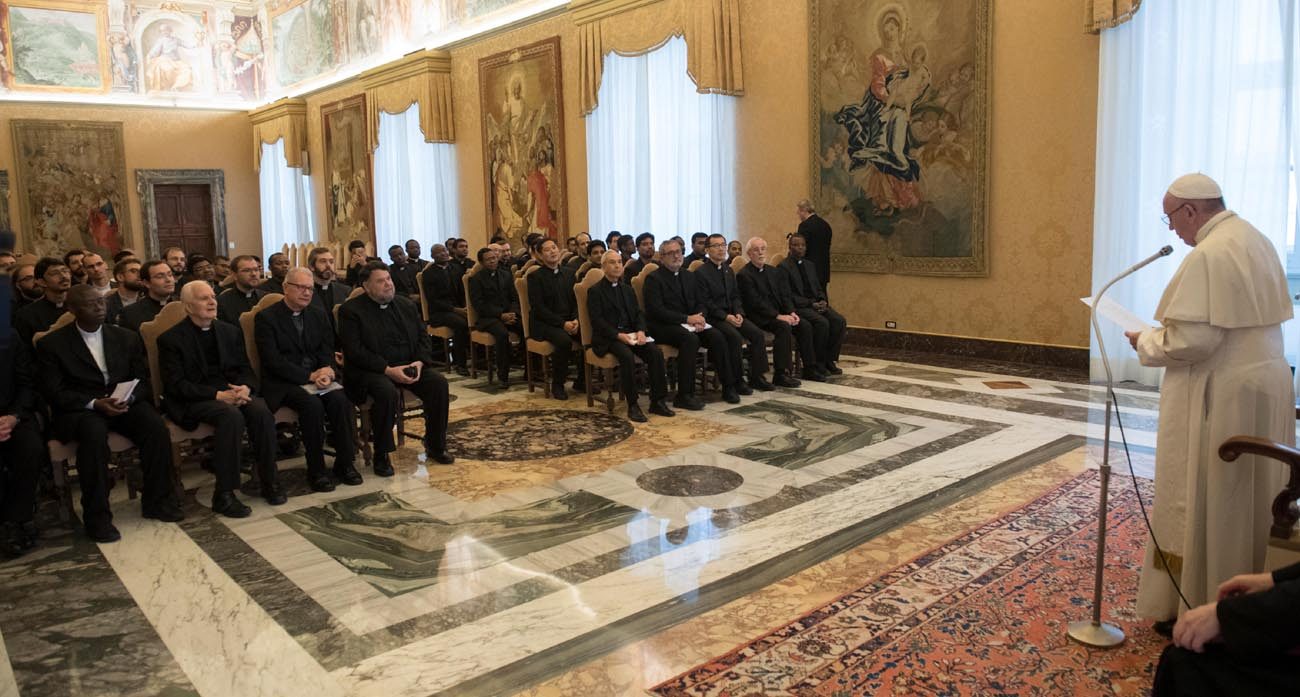 Pope Francis leads an audience with faculty and staff of the Jesuits' International College of the Gesu at the Vatican Dec. 3. The pope, a Jesuit, told his brethren that they have to be lambs when fighting the wolves. (CNS photo/Vatican Media)

VATICAN CITY (CNS) — There is no growth without some form of crisis and no victory without a battle, Pope Francis told a group of Jesuits.

In fact, “the worst evil that can happen to us,” he said, is growing complacent, self-satisfied and worldly in one’s spiritual life, too, he said.

The pope spoke Dec. 3 with staff and students of Rome’s International College of Gesu, founded by the late Jesuit Father Pedro Arrupe in 1968.

The pope told the community that they are called to strengthen their roots in God and grow in love.

“The plant grows from the roots, which you don’t see, but they hold everything. And it ceases to give fruit not when it has few branches but when the roots dry out. To have roots is to have a heart that is well-grafted” to God, enabling that heart to expand and be alive, he said.

“There is no growth without crisis. Don’t be afraid of crises,” he told them, because it is necessary the same way there is no “fruit without pruning, no victory without a battle.”

“To grow and to put down your roots means to fight without rest against every spiritual worldliness, which is the worst evil that can happen,” he said.

If such worldliness “attacks the roots, then goodbye fruit and goodbye plant. For me, this is the greatest danger right now — spiritual worldliness that leads you to clericalism and so on,” he added.

Two positive signs of growth, he said, are obedience and freedom, freedom from oneself and the slavery that selfishness would bring.

Jesuits are called to offer themselves and be “one-on-one” with people in their situation and “to take care of the world that God loves.”

Jesuits are called to be on the outskirts, in delicate situations and “in the deserts of humanity.”

They may find themselves “like a lamb among wolves, but they must not battle the wolves, they must only be a lamb,” never becoming like the wolves, so that Jesus, the Good Shepherd, will know “where his lamb is.”

NEXT: During Advent, Trinidad musicians visit houses to sing of Jesus’ birth