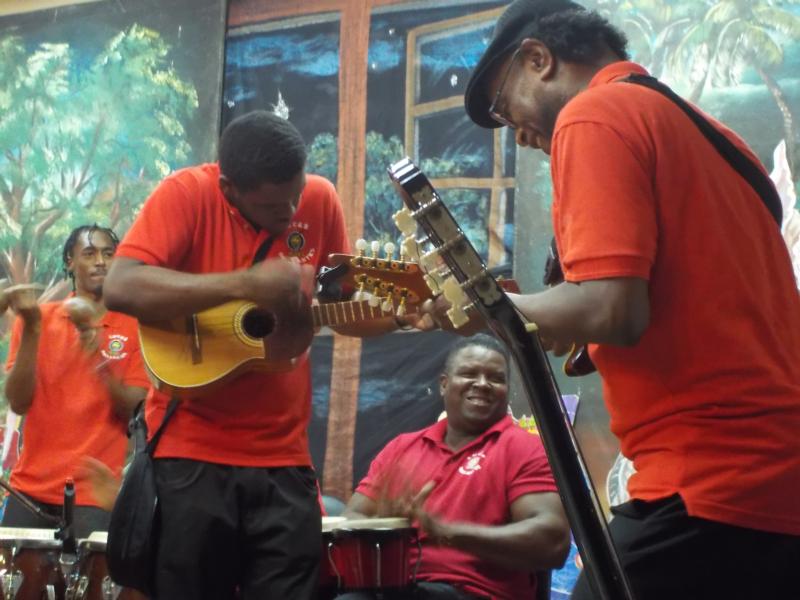 BARATARIA, Trinidad (CNS) — A hush descended on the room as the band — a rambling collection of men and women of ages and ethnicities as blended as the instruments they fingered — settled into their positions.

The instruments ranged from Latin scratchers and mandolins, to African-inspired skin drums and a rustic-looking box-bass — literally, a large wooden box just shy of two feet, with a stout, cylindrical mast protruding from one corner normally to the bassist’s breast. A lone, thick string connected the box’s center and mast-top; when plucked, it sounded like a cannon with a cold.

Silence, until, at some hidden cue, the first note thundered collectively, truncated almost as soon as it began.

Pause. Another note; brief, silenced, the box-bass’ belch like the early roar of war. Then, the Latin-inspired melody released, surging like a battalion charging hot through a breach, like the one made by the Redeemer of whom they sang, who breached the walls of sin and death with a lowly birth.

This group was performing to a mixed audience at a modest parish fundraiser, but traditional parang forms part of an intimate prayer celebration in private homes.

“There is a tradition that started in Venezuela of carrying a gift of song to the homes, just as in English culture, there is caroling,” explained Julio Torres, veteran parang musician and vocal coach. He added that parang is indigenous to Trinidad.

Over the centuries, there was much informal bartering between Trinidad and Venezuela, but the cultural exchange was most noticeable during the late 19th century, when Venezuelan laborers came to work on Trinidad’s flourishing cocoa and coffee estates.

The word “parang” stems from the Spanish “parranda,” meaning: “group of serenaders” or “act of merry-making.” Groups of parang singers and musicians, called paranderos, would go house to house during the evenings of the Advent and Christmas seasons, expecting no food or monetary compensation, said Torres.

The content and sequence of their repertoire would be taken almost entirely from the Gospel of Luke’s infancy narratives of Jesus and were done in Spanish and song.

Alicia Jaggasar, president of the National Parang Association of Trinidad and Tobago, recalls her introduction to parang as a student of San Juan Secondary School. The teachers there insisted that their parang group, Los Alumnos de San Juan, deliver all renderings in perfect Spanish.

Still a member of Los Alumnos today, she continues the practice, promoting excellence in performing Spanish music as one of the association’s aims. When composing original work, she consults closely with a team of professors in Trinidad.

“The product,” she noted, “is normally a winning product.”

Early parang groups took the names of the Roman Catholic parishes from which they originated: La Divina Pastora, for example, or Flores de San Jose. And, in their house-to-house musical mission, there was an established sequence in which the songs were to be rendered.

The paranderos were expected to arrive unexpectedly, then began with an introductory piece, called the seranal, in which the band identified itself and asked to be let in. Both Jaggasar and Torres stressed the importance of it.

Once let inside, the group would thank their hosts for welcoming them, compliment hosts and home, then proceed to sing of the annunciation and birth of Jesus. Some compositions also included Mary’s visit to Elizabeth and John the Baptist’s birth. Songs of farewell followed, for visits normally lasted 15-20 minutes. Sometimes the visit lasted longer, if the host invited the group to stay, in which case waltzes, bachatas, salsa or other instrumentals were played to encourage people to dance.

The hosts may prepare a meal, but it was more traditional to offer a local wine made of fermented sugar cane juice, called warapo, as well as coffee and a snack.

“The sugar from the cane juice peps you up,” explained Jaggasar; some paranderos could be away from home all night or for several days. Sometimes, a member of each household visited would leave with the band, expanding the group to provide spare musicians and singers who could take turns.

But that’s now uncommon, said Torres, except in some neighborhoods in which people know each other well. Trinidad’s high crime rates and permissive attitude to drunk driving, said Jaggasar, severely sabotaged the visitation tradition.

The earthy throb of parang made it a prime project for local rhythm-gurus. It was blended with soca, an offshoot of calypso. The heady hybrid is called soca-parang and, today, it is standard fete fare even outside of Christmas.

Some soca-parang pieces are innocuous enough, but, there are concerns that others are directly at odds with parang’s intrinsic identity.

“You see a different type of soca-parang now, the double entendre,” Jaggasar noted, “saying things (that), really, for a Christian who celebrates Christmas, is a bit ‘cringey’ to listen to.”

So, when she was elected Parang Association president earlier this year, she determined to spend that time redirecting public attention to parang’s Christian roots.

The theme of this year’s local parang festival is “From Nazareth to Bethlehem.” It is intended to be a reflection on Mary and Joseph’s journey to Bethlehem, tracing all the villages they would have passed on the way. Each Trinidad location that hosted a festival event was assigned the name of a biblical village from along the Nazareth-Bethlehem route, and their decorations were expected to reflect some aspect of it.

“When I brought (the idea) to the executive, there was no opposition,” Jaggasar said. “They were really happy to be doing it because, I think, everybody felt the same way: that we needed to get this aspect of it out there.”

PREVIOUS: Do not be afraid of crises, pope tells Jesuits

NEXT: Pope’s white Lamborghini up for raffle; winner gets trip to Rome