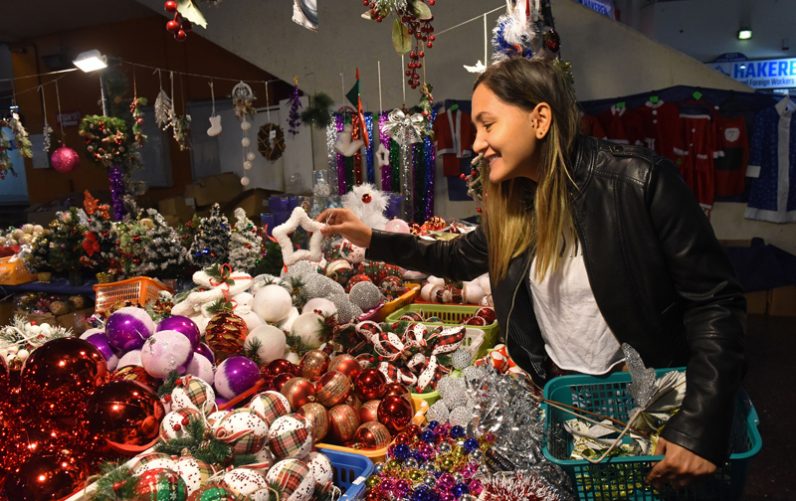 Diana Giraldo of Colombia shops at the Christmas market in the central bus station in Tel Aviv, Israel, Dec. 9. The market offers an opportunity for foreigners to buy decorations for Christmas in the Jewish state. (CNS photo/Debbie Hill)

TEL AVIV, Israel (CNS) — For foreign workers and other nonlocal Christians living in Israel, celebrating Christmas far from loved ones in a country where Christians are a minority can be a difficult time.

Used to a festive Christmas season back home in the Philippines, many of the Filipino caretakers who work with mainly Jewish families have learned to adjust their expectations.

“We are missing our families. We are used to seeing all the Christmas decorations everywhere,” said Vangie Lapada, 51, who has been working in Israel for five years. She is a caretaker in the Golan Heights in northern Israel, where there are few Christians.

But as Israel’s population has become more diverse to include foreign caretakers, migrant workers and asylum seekers — many of whom are Christians living in cities where Jewish residents are the majority — Jewish Israelis also have adjusted to a new reality. One of the changing points has also been the arrival of Jewish immigrants from the former Soviet Union where the New Year celebration, Novy God, uses many of the usual Christmas symbols for the nonreligious holiday.

On a mid-December Sunday, Lapada used her day off to travel to Tel Aviv with a friend. On the fourth floor of the cavernous Tel Aviv central bus station, they visited the pop-up Christmas market with its twinkling Christmas lights and festive Santa Claus apparel. A large banner in the center of the station announced the location of the market.

The stalls were set up several years ago by Jewish immigrants from the former Soviet Union wanting to openly celebrate the Novy God holiday. The market also has provided a place for Filipino foreign workers and others to enjoy some trappings of Christmas.

“This (market) makes me happy because it brings a bit of our tradition,” said Lapada as she and Angeline Fernando, 48, snapped selfies of themselves wearing Santa hats in front of a white plastic Christmas tree covered with decorations. English Christmas songs played from a stereo, adding to the atmosphere.

Lapada said that, in Israel, the main focus of their celebrations is the Filipino parishes in the larger cities and in the homes of friends who are not live-in caretakers, but she still misses the general atmosphere of Christmas in the Philippines.

“My employer is a religious Jew, so we don’t have a tree in the apartment. I come here to take pictures and feel the spirit of Christmas. These decorations are part of Christmas for us,” said Lapada.

Fernando, who works in Tel Aviv caring for a Jewish woman originally from France, said her employer enjoys the Christmas lights, and they combine Hanukkah and Christmas decorations in the apartment.

“Every day we have visitors, and they all say how beautiful the decorations are because of the colors. But I come here to see the trees, and I feel like I am in the Philippines,” Fernando said.

Because of its unique decorations made in Russia and other high-quality Christmas items, the market even sometimes attracts local Christians who live in areas where other Christmas decorations are sold.

“My mother wanted to buy the special glass decorations they have here instead of the plastic ornaments sold in Jerusalem,” said Rami, a Palestinian Christian from Jerusalem who declined to give his last name. His mother went from one stall to another, looking over delicate, hand-decorated ornaments nestled in boxes; larger ornaments made to look like snowflakes; and china Santa Claus/Grandfather Winter dolls.

Vasilisa Gorbichova, 9, who moved with her parents from Russia one-and-a-half years ago, helped her mother, Olga Alaeva, 35, decide which lights to buy. Alaeva is Christian and her husband is Jewish. For Vasilisa, the decorations were all about Novy God.

“I love the night of Novy God. I get presents from Grandfather Winter,” she said. “My favorite thing is to put up the decorations. My friends accept it, they know me and understand that I am Russian, and this is our tradition.”

Yulia, 28, a seller from Tel Aviv who moved to Israel from Russia three years ago, said the market runs a brisk business in the weeks leading up to Christmas and Novy God. Sellers have never experienced any negative response from Jewish Israelis walking by the market, she said.

“In Tel Aviv, there are a lot of people from different countries, so it is a very tolerant city,” she said. “This (market) is the best place to work on the holiday.”

Diana Giraldo, 28, a Colombian who moved to Israel this fall, was preparing for her first Christmas away from home.

“It is very hard and sad to celebrate Christmas without my family, so I am very happy to see this market, because I didn’t know where I was going to get my decorations from,” Giraldo said. She heard about the market through a Facebook page, she said.

“This is our tradition. This is what we are used to,” she said. “Now we can go home and put up our decorations.” 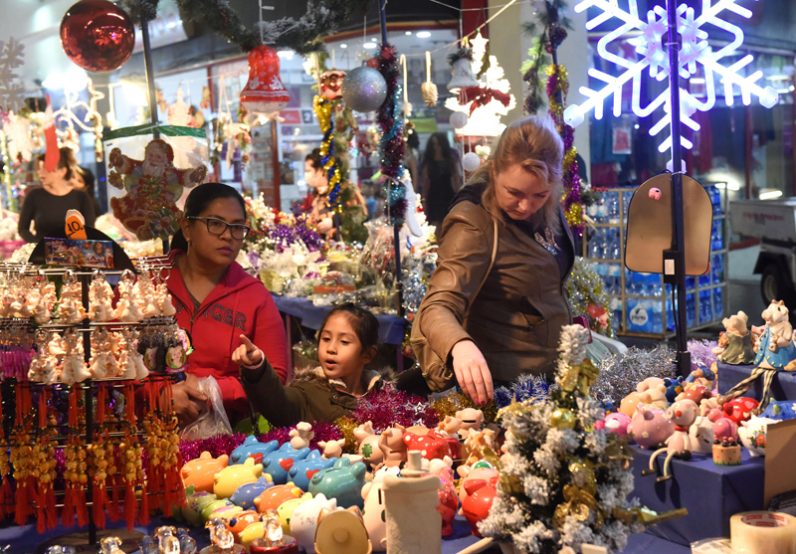 People shop at the Christmas market in the central bus station in Tel Aviv, Israel, Dec. 9. The market offers an opportunity for foreigners to buy decorations for Christmas in the Jewish state. (CNS photo/Debbie Hill)