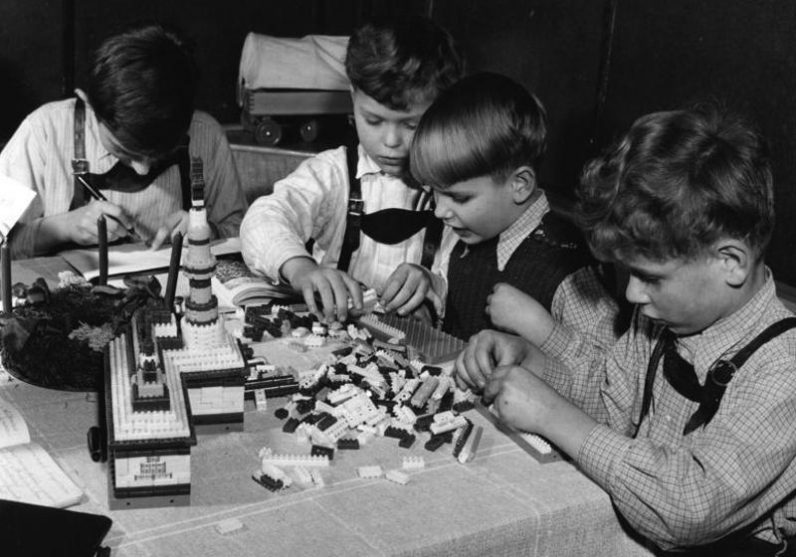 Boys play with Legos at a Catholic orphanage in Bonn, Germany, during Advent in 1960. The number of German children in orphanages surged after World War II. The Diocese of Hildesheim is investigating reports that many children in these homes were victims of sexual abuse by clergy. (CNS photo/courtesy German Federal Archives)

An investigation by the Diocese of Hildesheim, Germany, is shedding new light on child sex abuse in Catholic children’s homes in the country in the 1950s. A central figure in the inquiry is an esteemed and controversial figure, Bishop Heinrich Maria Janssen, a former priest in Nazi-occupied Poland awarded Germany’s highest federal decoration in 1966 for postwar charity work.

Volker Bauerfeld, a spokesman for the diocese, told Catholic News Service the allegations against Janssen have “deeply shaken many people” in the diocese, due to Janssen’s status as “one of the most renowned Hildesheim bishops of modern times.”

Although Bishop Janssen and his alleged accomplices are long dead, Bishop Heiner Wilmer, the current bishop, is investigating the matter fully to “bring more light into the darkness.”

Bishop Wilmer is launching a vigorous inquiry to investigate sexual abuse allegedly committed by Bishop Janssen and Catholic orphanage chaplains, with the aim of revealing the truth behind a possible local pedophile ring.

Hildesheim, an ornate medieval city founded by a son of Charlemagne, was bombed to ashes during Allied air raids in World War II. The charred ghost town was flooded in 1945 with ethnic German refugees from Eastern Europe, known in Germany as “The Expelled.” These displaced people were deportees from Slavic territories, forced to leave their homes as the Eastern front collapsed during the final phase of the war. Many of them were Catholic.

As more than 100,000 German Catholic refugees poured into Hildesheim, a new demand rose — child and youth care. In the years following World War II, the numbers of German children in orphanages and youth centers surged. Many had lost their homes. Their parents were missing, killed, working or unable to care for them.

Bishop Janssen, ordained in 1934 and assigned as a pastor in a remote area of Nazi-occupied Poland, took charge of the diocese swelling with displaced and impoverished Germans. During his 25-year term, Bishop Janssen was credited with consecrating 270 churches. He died in 1988.

His pastoral engagement with displaced Germans, according to Bauerfeld, has made his alleged role in child sex abuse shocking and controversial to present-day diocesan churchgoers.

Testimony released by the diocese has revealed that children in the orphanages were targeted by sexual predators. Two male victims, now elderly, disclosed they were sexually abused by priests running the Catholic Johannishof orphanage, founded in 1952, and the Bernwardshof home for young boys in Hildesheim. Both victims were previously altar servers.

Testimony by a former victim in his 70s in November alleged that, in 1957, a children’s home administrator took him to Bishop Janssen, who forced him to strip naked.

“The victim described that he was sexually humiliated by Bishop Heinrich Maria Janssen. It is obvious that such an act could have been closely connected to diocesan structures at that time, particularly the Catholic children and youth homes in Hildesheim,” Bishop Wilmer said in a Nov. 13 statement. “I will therefore immediately hire external experts to intensively research this area. Above all, the role Heinrich Maria Janssen played in this context must be uncovered.”

Bishop Wilmer said he is compelled to find out and reveal the truth for the sake of possible victims and for those in the community whose previous esteem for Janssen have caused them to feel shaken.

“It rips my heart, what the victim has shared with us,” said Bishop Wilmer, who personally heard the elderly victim’s story at a meeting in November. “It makes me furious and deeply grieved that this was done to him by employees of our church.”

“The fact that he brought himself to speak with us about this monstrous pain that has weighed down his soul merits my highest respect.”

Bishop Janssen was decorated with Germany’s Order of Merit cross for charitable actions after World War II. A spokesman for the Diocese of Hildesheim told Catholic News Service he could not comment on the possibility of this honor being posthumously revoked.