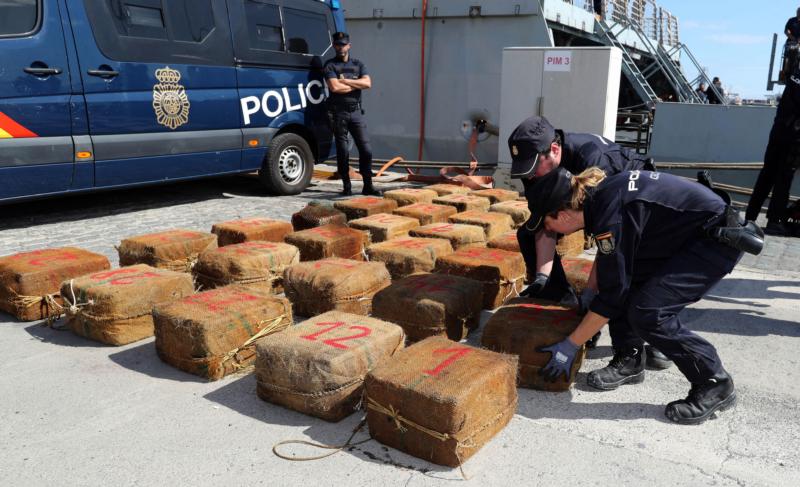 VATICAN CITY (CNS) — Everyone must help in the fight against drugs, particularly governments which are called to confront the “traffickers of death” who produce, distribute or sell addictive substances, Pope Francis said.

There needs to be better and more cooperation of people and coordination of policies battling drugs and dependencies, he said.

“Isolated policies are no use; it is a human problem, it is a social problem, everything must be connected, creating a network of solidarity and closeness with those who are scarred by these pathologies” of addiction, he said.

The pope made his comments during an audience Dec. 1 with experts attending an international conference on drugs and addictions organized by the Dicastery for Promoting Integral Human Development.

“We are all called to tackle the production, expansion and distribution of drugs in the world,” he told participants.

“It is the duty and task of governments to face with courage this fight against traffickers of death,” he said, adding that “we must not be afraid to give this title” to those behind the drug trade.

The conference, held Nov. 29-Dec. 1, brought together experts, international organizations and specialists working for rehabilitation centers or for church-run initiatives to discuss current challenges with drug abuse and addictions and best practices in prevention and treatment.

M.C. Sullivan, a nurse, bioethicist, attorney and the chief health care ethicist for the Archdiocese of Boston, spoke at the conference about some of the programs and initiatives they run, some in conjunction with a local hospital.

She told Catholic News Service Nov. 30 that reaching out to those affected by addiction, mental illness and depression is “a moral obligation.”

“This is how we love as Jesus loved,” she said.

Education and prevention must start early, she said, explaining how reported cases of depression, self-harming, suicide and suicide attempts have been rising nationwide and are affecting children as young as 3 and 4 years old. Research has shown there is a connection between mental health disorders and substance abuse with many people seeking to numb, escape or medicate their mental health symptoms with addictive behaviors or substances or with substance abuse creating problems that can lead to mental health problems.

One child in five is believed to have some kind of mental illness, Sullivan said, but if caught early more than half of those kids can manage their challenges successfully..

But “part of the problem is that we don’t get to children early enough to help them because there is a social stigma” or embarrassment in seeking help or recognizing there may be a problem, she said.

While there is less stigmatization today, she said there is still more to be done in getting people to go from accepting there is an issue to taking the step to get help.

Sullivan also underlined the importance of safety and the need to seek competent licensed experts or people with clinical expertise when it comes to getting help or advice concerning a child’s behavior or signs something may not be right.

“Just because someone is on a committee doesn’t make them an expert,” she added. Concerns or questions can be brought to a pediatrician, an urgent care facility or hospital, she said.

Cynthia Hunt, a medical doctor, pediatrician and psychiatrist, is regional director of the Catholic Medical Association. She attended the conference along with Diana Ruzicka, a registered nurse, retired colonel of the U.S. Army and past president of the National Association of Catholic Nurses.

They told CNS that spiritual support is fundamental for recovery and praised the way the current White House administration is reaching out to faith-based communities and requesting input on treatment and healing addictions from Catholic physicians, particularly in light of the opioid crisis.

Hunt said some studies show success in healing when “faith-based integration,” such as that used in traditional 12-step recovery programs, is used to promote forgiveness and to deal with anger.

“One has to believe and get to the point that they are all helpless with this addiction and then give that to God,” she said.

Ruzicka added that “we need to treat the dignity of the human person” and even pray with patients when appropriate because people too often forget the power of prayer. “Prayer got replaced by secular humanism and it leaves a hole in people’s hearts. I think they are trying to fill that hole with substances,” said Ruzicka, who has served on Veteran’s Administration-Department of Defense work group establishing acute pain management and chronic opioid therapy clinical practice guidelines adopted worldwide.

After the hospital she works at in Monterey, California, started a “Prescribe Safe” initiative in 2014 with first responders and healthcare providers in promoting non-opiate pain relief prescriptions and the safe use of medications, “opiate overdoses in that hospital went really down and is still down. Monterey County used to be one of the highest in California” when it comes to opioid overdoses and deaths, “now it’s one of the lowest.”

Peter Kleponis, a licensed clinical therapist and assistant director of Comprehensive Counseling Services in Conshohocken, Pennsylvania, spoke at the conference about pornography addiction.

“We know now through neuroscience that this is an addictive substance similar to drugs and alcohol,” he told CNS, and it “really has become the new drug of choice because of the accessibility of it through the internet.”

“It’s affecting individual lives, particularly marriages. It plays a significant role in over 50 percent of divorces in the U.S., so it is an issue that we do have to address.”

Contributing to this story was Anne Condodina in Rome.

NEXT: If gay priests, religious can’t be celibate, they should leave, pope says