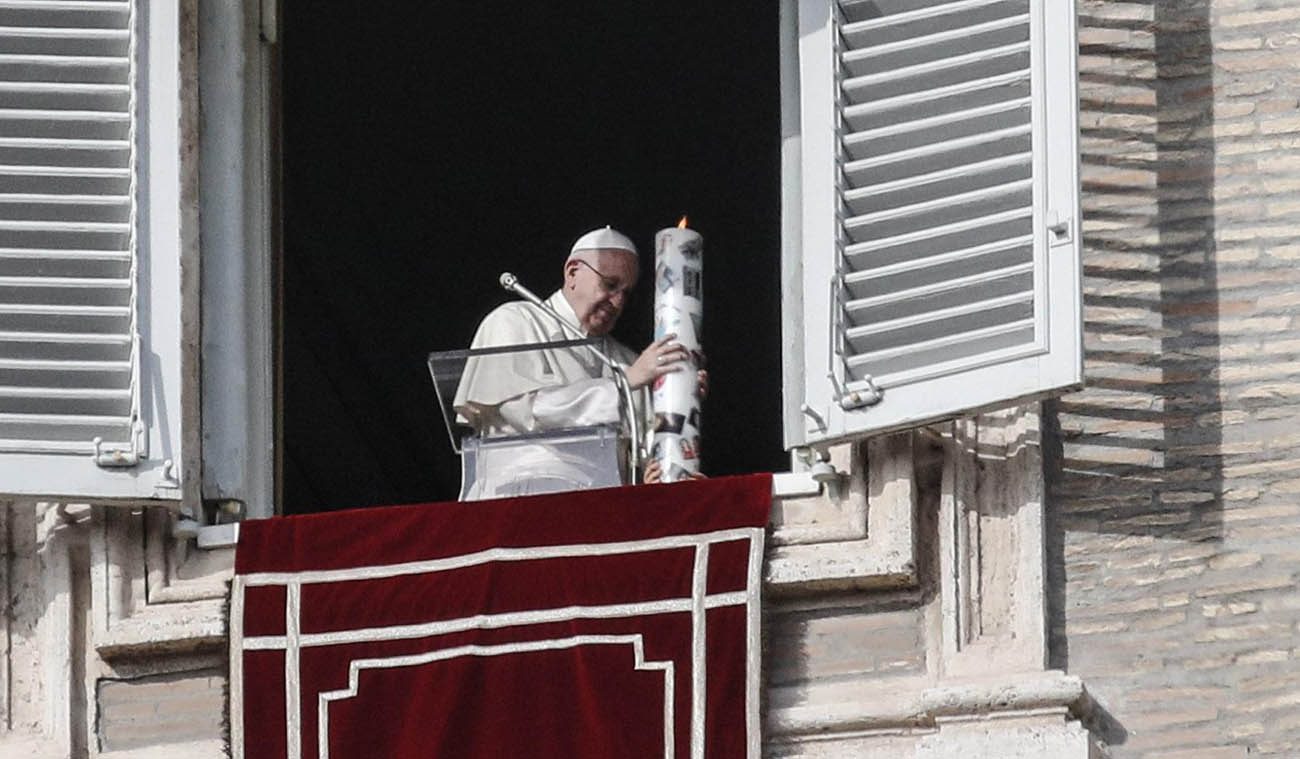 Pope Francis places an Advent candle during the Angelus prayer led from the window of his studio overlooking St. Peter's Square at the Vatican Dec. 2. The pope lit the candle as he launched the Christmas campaign, "Candles for Peace in Syria," an initiative of Aid to the Church in Need. (CNS photo/Giuseppe Lami, EPA)

VATICAN CITY (CNS) — Leading thousands of pilgrims in prayer, Pope Francis lit a candle in remembrance of the people of Syria, especially innocent children tormented by the country’s eight-year conflict.

“May this flame of hope and many flames of hope dispel the darkness of war,” he said Dec. 2 after praying the Angelus prayer.

The lighting of the candle was part of a Christmas campaign sponsored by Aid to the Church in Need to call attention to the plight of the Syrian people, especially Christians who are “in grave danger of becoming a relic of the past.”

The campaign officially was launched with the candle lighting. According to Aid to the Church in Need, an estimated 50,000 children from different Christian communities in six war-torn cities of the country — Damascus, Homs, Marmarita, Aleppo, Hassake, Tartous and Latakia — lit candles for peace.

“Before the beginning of the war, Christians accounted for some 10 percent of the population, around 2.5 million people,” the organization said on its website. “As of today, it is estimated that approximately only 700,000 remain, which would amount to between 3 and 4 percent of the population — although it is difficult to give precise figures at this stage.”

Aid to the Church in Need also said it plans to finance emergency assistance programs in Syria valued at 15 million euros ($17 million).

Pope Francis called on the pilgrims gathered in St. Peter’s Square to pray so that Christians may remain in Syria and the Middle East as “witnesses of mercy, forgiveness and reconciliation.”

He also prayed that the flame of hope would reach those suffering around the world due to conflicts and that the hearts of those who profit from war would change.

“May God, our Lord, forgive those who wage war and those who make weapons … and convert their hearts,” he said. “Let us pray for peace in beloved Syria.”