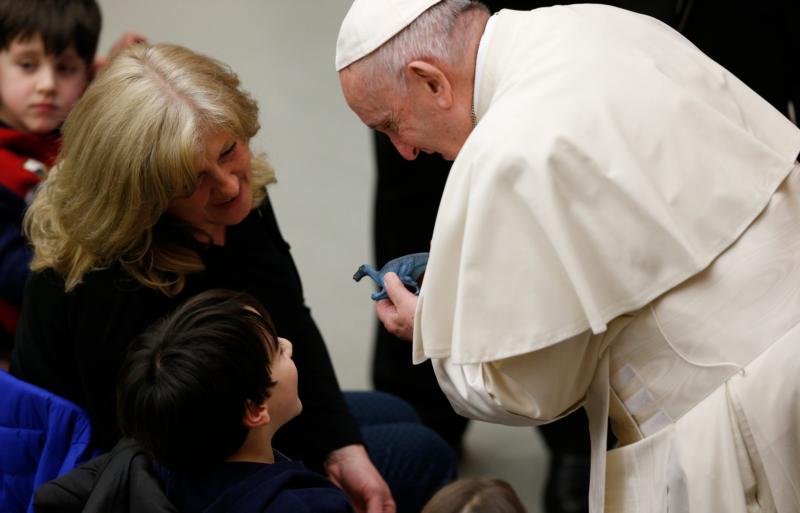 Pope Francis accepts a toy dinosaur from a boy as he meets the disabled during his general audience in Paul VI hall at the Vatican Dec. 5. (CNS photo/Paul Haring)

VATICAN CITY (CNS) — Jesus’ way of praying to his father throughout his life is a reminder for Christians that prayer is more than asking God for something but is a way of establishing an intimate relationship with him, Pope Francis said.

Prayer is a longing within one’s soul that is “perhaps one of the most profound mysteries of the universe,” the pope said Dec. 5 during his weekly general audience in the Paul VI audience hall.

“Even if we have perhaps been praying for so many years, we must always learn!” he said.

Beginning a new series of audience talks on the “Our Father,” the pope reflected on the disciples’ request to Jesus to teach them how to pray.

The Gospels, he said, offer “very vivid portraits of Jesus as a man of prayer” who, despite the urgency of his public ministry, often felt the need to withdraw into solitude and pray.

“In some pages of Scripture, it seems that it is first Jesus’ prayer, his intimacy with the Father, that governs everything,” the pope said.

This intimacy, he added, is evident in Jesus’ prayer in the Garden of Gethsemane where he experienced “real agony,” yet was given the strength to continue along “the way toward the cross” where even in his final moments, he prayed the Psalms.

“Jesus prayed intensely in public moments, sharing the liturgy of his people, but he also looked for select places, separated from the whirlwind of the world, places that allowed him to descend into the secret of his soul,” the pope said.

Pope Francis said that in teaching his disciples to pray, Jesus shows that he is not “possessive of his intimacy with the father” but rather came into the world “to introduce us into this intimacy.”

However, he said, the first step in establishing this relationship with God through prayer is humility.

“The first step to pray is to be humble, to go to the father, to go to Our Lady and say, ‘Look at me, I’m a sinner, I am weak, I am bad,'” the pope said. “Everyone knows what to say but it always begins with humility. The Lord listens; a humble prayer is always listened to by the Lord.”