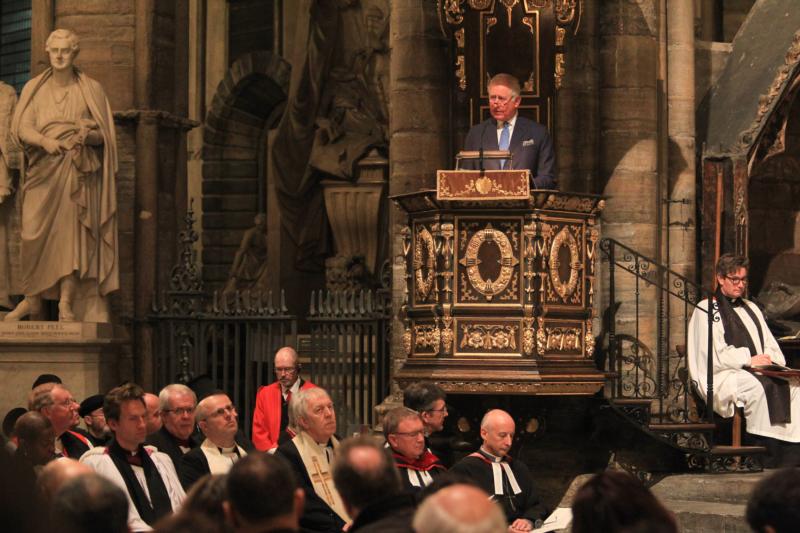 Britain’s Prince Charles speaks Dec. 4 during an ecumenical service at London’s Westminster Abbey. The prince spoke of how he was deeply moved by the testimony of Dominican Sister Luma Khudher of Iraq, who fled Islamic State militants but has returned to the Ninevah Plain to help re-establish the Christian presence. (CNS photo/Andrew Dunsmore, courtesy Westminster Abbey)

LONDON (CNS) — The heir to the British throne spoke of how he was deeply moved by the testimony of an Iraqi sister who fled Islamic State militants but has returned to the Ninevah Plain to help re-establish the Christian presence.

Charles, Prince of Wales, described the resilience of Sister Luma Khudher, a Dominican Sister of St. Catherine of Siena, and other Iraqi refugees as a testament to the “extraordinary power of faith.”

Speaking in Westminster Abbey at a Dec. 4 ecumenical service “to celebrate the contribution of Christians in the Middle East,” the prince recalled his “great joy” of meeting Sister Luma in England in October.

He told a congregation of more than 1,000 people how, in 2014, as extremists advanced on the Christian town of Qaraqosh, Sister Luma “got behind the wheel of a minibus crammed full of her fellow Christians and drove the long and dangerous road to safety.”

“Like the 100,000 other Christians who were forced from the Ninevah Plains by Daesh that year, they left behind the ruins of their homes and churches and the shattered remnants of their communities,” he said.

“The sister told me, movingly, of her return to Ninevah with her fellow sisters three years later, and of their despair at the utter destruction they found there,” he said. “But like so many others, they put their faith in God, and today the tide has turned — nearly half of those displaced having gone back to rebuild their homes and their communities.”

Prince Charles said the return of Christians to Iraq represented “the most wonderful testament to the resilience of humanity, and to the extraordinary power of faith to resist even the most brutal efforts to extinguish it.”

He said that in meeting people like Sister Luma, he was repeatedly “deeply humbled and profoundly moved by the extraordinary grace and capacity for forgiveness that I have seen in those who have suffered so much.”

“It is an act of supreme courage, of a refusal to be defined by the sin against you,” he said, “of determination that love will triumph over hate.”

Christians who face persecution, endure and overcome “are an inspiration to the whole church, and to all people of goodwill.” 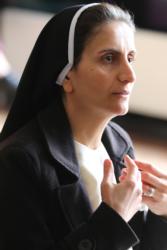 Sister Luma visited the United Kingdom in October as a guest of the Aid to the Church in Need, a Catholic charity helping persecuted Christians.

She speaks English, having studied at the Catholic Theological Union in Chicago and earning a doctorate in biblical studies at the University of Notre Dame in Indiana, so she could describe her ordeal in detail during a private meeting with the prince.

In his address, Prince Charles also expressed his hope that Christians and Muslims will again live together in peace, saying that throughout history they have “shown that it is possible to live side by side as neighbors and friends.”

“Indeed, I know that in Lebanon, Muslims join Christians at the Shrine of our Lady of Lebanon to honor her together,” Prince Charles said. “And I know that there are Muslim faith leaders who have spoken out in defense of Christian communities and of their contribution to the region.”

“Co-existence and understanding are not just possible, therefore; they are confirmed by hundreds of years of shared experience,” he said. “Extremism and division are by no means inevitable.”

The Catholic Church was represented at the service by Archbishop Peter Smith of Southwark, vice president of the English and Welsh bishops’ conference; Dominican Father Timothy Radcliffe; and by U.S. Archbishop Edward J. Adams, papal nuncio to Great Britain. Christian leaders from the Middle East and North Africa also were in attendance.

Anglican Archbishop Justin Welby of Canterbury said that “to live in a country or in a society where a government, or an armed group, or even a minority of people consider that you should be consigned to oblivion because of your faith in Christ is an experience that is without parallel.”

“Obedience for Christians outside the Middle East and outside areas of persecution is to ensure that governments, that households, that societies welcome the afflicted, pray for the suffering, stand with those in torment, rejoice in liberation,” he said.