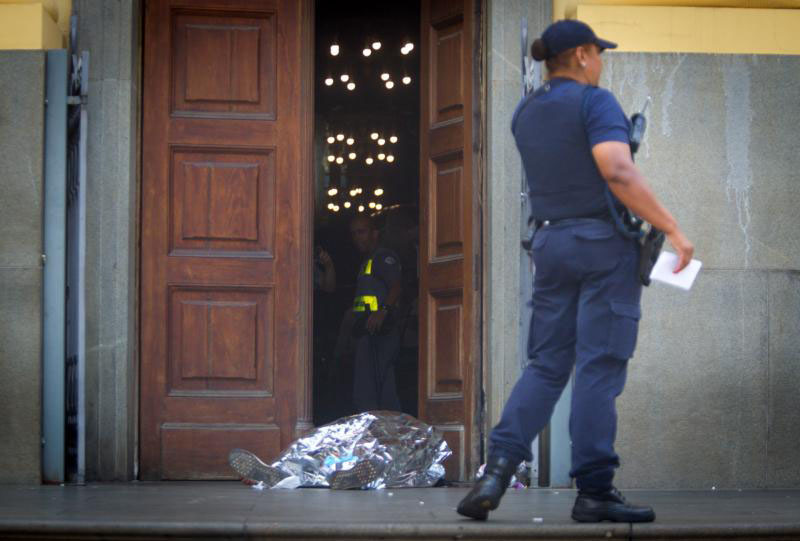 A police officer stands next to a body at the scene of a shooting Dec. 11 at the Metropolitan Cathedral in Campinas, Brazil. Police said Euler Fernando Grandolpho opened fire in the cathedral, killing at least four people and injuring several others before the 49-year-old turned the gun on himself after being shot by police. (CNS photo/Ricardo Lima, Reuters)

UPDATED – SAO PAULO (CNS) — A gunman opened fire inside a Brazilian church, killing four people and injuring four others before turning the gun on himself, police said.

The shooting occurred Dec. 11 just as parishioners from Our Lady of the Conception Cathedral in Campinas, near Sao Paulo, were leaving a midday Mass.

“I conducted the Mass at 12.15, at the end of the Mass a person came firing and made some victims, nobody could do anything, or help at all,” said Father Amauri Thomazzi in an emotional video posted on his social media account hours after the incident.

Police identified the gunman as Euler Fernando Grandolpho, 49, of Valinhos, a nearby city in the densely populated state of Sao Paulo. Police said the gunman fired more than 20 shots before being cornered by officers near the altar and killing himself.

In a telegram sent Dec. 12 to Father Jose Eduardo Meschiatti, administrator of the Archdiocese of Campinas, by Cardinal Pietro Parolin, Vatican secretary of state, Pope Francis expressed his sadness after hearing news of the attack and “assured his solidarity and spiritual comfort to the families who have lost their loved ones.”

“The Holy Father invites everyone, in front of this moment of sorrow, to find comfort and strength in the risen Jesus, asking God that hope may not be lost in this hour of trial and that forgiveness and love may prevail over hatred and vengeance,” Cardinal Parolin said.

Footage of security cameras shows that the shooter entered the church alone, sat on a rear bench in the back for several minutes before turning around and firing at people behind him.

Pedro Rodriques was at the Mass and watched as the gunman stood up and began firing at people.

“I entered (the church) at the end of Mass,” Rodrigues said. “People began to come to do the individual actions and suddenly (I) realized that in the middle a man stood up, positioned himself in front of a couple and began firing point-blank at them. I saw the two shots.”

Rodrigues said he was seated in one of the last pews of the cathedral, between the shooter and the main doors. After the initial shots, Rodrigues remembers he ran out of the church and continued to hear shots. “I heard about 15 shots,” he said.

In a statement, the Archdiocese of Campinas said the Catholic community was shocked that such a tragedy could occur within its cathedral.

“We suffer with the people who at this moment mourn the death of their friends, brothers and relatives. We ask everyone to pray for these families to find comfort and peace in God,” the archdiocese said.

The cathedral was to reopen at noon Dec. 12 for a special Mass for those who died. The four bodies are scheduled to be brought to the cathedral for viewing during the day before burial.

Of the four injured in the shooting, an 84-year-old man remains hospitalized in critical condition after being shot twice in the chest and abdomen. Another victim remains in observation after undergoing surgery to remove bullets from her torso and two other victims were treated at a nearby hospital and released.

Police said the motive for the shooting was unclear and continued to investigate the gunman’s background.

PREVIOUS: Don’t be afraid to ask for things from God in prayer, pope says

NEXT: Three cardinals end service on pope’s Council of Cardinals