Don’t be afraid to ask for things from God in prayer, pope says 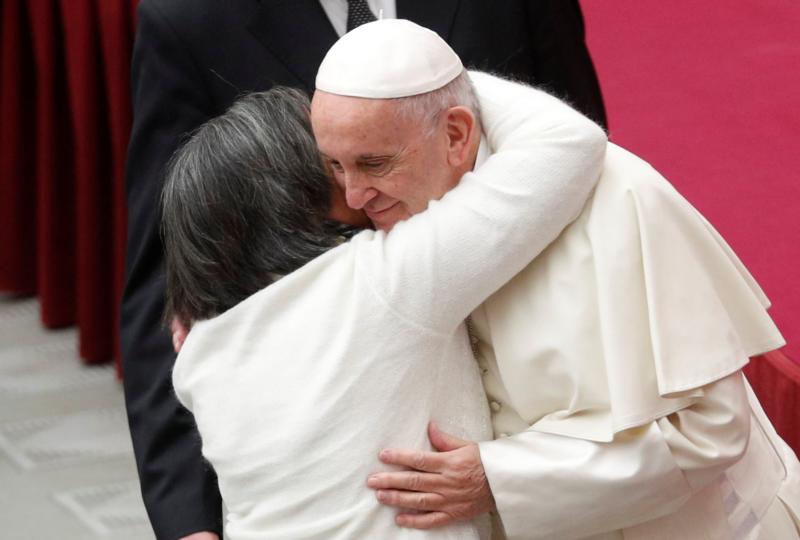 A woman embraces Pope Francis as he arrives to lead his general audience in Paul VI Hall Dec. 12 at the Vatican. (CNS photo/Max Rossi, Reuters)

VATICAN CITY (CNS) — No one should be afraid to turn to God with prayer, especially in times of great doubt, suffering and need, Pope Francis said.

Jesus does not want people to become numb to life’s problems and “extinguish” those things that make them human when they pray, the pope said Dec. 12 during his weekly general audience in the Paul VI audience hall.

“He does not want us to smother our questions and requests, learning to put up with everything. Instead, he wants every pain, every apprehension to rise up to heaven and become a dialogue” with God, the father, he said.

Continuing a new series of audience talks on the Our Father, the pope reflected on the simplicity of the prayer and the way it addresses God with intimate familiarity.

With this prayer, Jesus shows an “audacious” way to address God immediately as “our Father” without any pomp and “preambles,” the pope said.

“No. He doesn’t say that, but simply (uses) the word, ‘Father,’ with great simplicity, like children who turn to their daddy. This word, ‘Father,’ expresses intimacy, filial trust,” he said.

The prayer invites people to pray in a way that “lets all the barriers of subjection and fear fall away,” he added.

While the Our Father is rooted in “the concrete reality” of every human being, prayer, in essence, begins with life itself.

“Our first prayer, in a certain way, was the first wail that came with our first breath” as a , and it signals every human being’s destiny: “our continual hunger, our continual thirst, our constant search for happiness.”

Prayer is found wherever there is a deep hunger, longing, struggle and the question, “why?” Pope Francis said.

“We all should be like Bartimaeus in the Gospel,” he said. This blind man in Jericho kept crying out to the Lord for help even though everyone around him told him to be quiet and not bother Jesus, who — they felt — ought not be disturbed because he was so busy.

Bartimaeus did not listen and only cried out louder “with holy insistence,” the pope said. Jesus listened to his plea and told him his faith is what saved him.

The pope said this shows how the cry for healing is an essential part of salvation, because it shows the person has faith and hope and is “free from the desperation of those who do not believe there is a way out of so many unbearable situations.”

“We can tell him everything, even those things in our life that are distorted and beyond comprehension. He promised us that he would always be with us,” he said.

When greeting visitors at the end of the audience, the pope greeted all those from Mexico and Latin America, noting that Dec. 12 marked the feast “of our patroness,” Our Lady of Guadalupe. He asked that she help people surrender themselves to God’s love and to place all of their hope in him.

Before the audience, the pope blew out a few candles on a birthday cake a visitor had prepared for him. The pope will celebrate his 82nd birthday Dec. 17.

Greeting visitors at the end of the audience, the pope met with a delegation from Panama, representing the upcoming World Youth Day events in January, and he greeted a delegation of Austrian members of parliament who were marking the 200th anniversary of the song “Silent Night,” whose melody was composed by an Austrian school teacher.

The pope said that “with its profound simplicity, this song helps us understand the event of that holy night. Jesus, the savior, born in Bethlehem, reveals to us the love of God the father.”