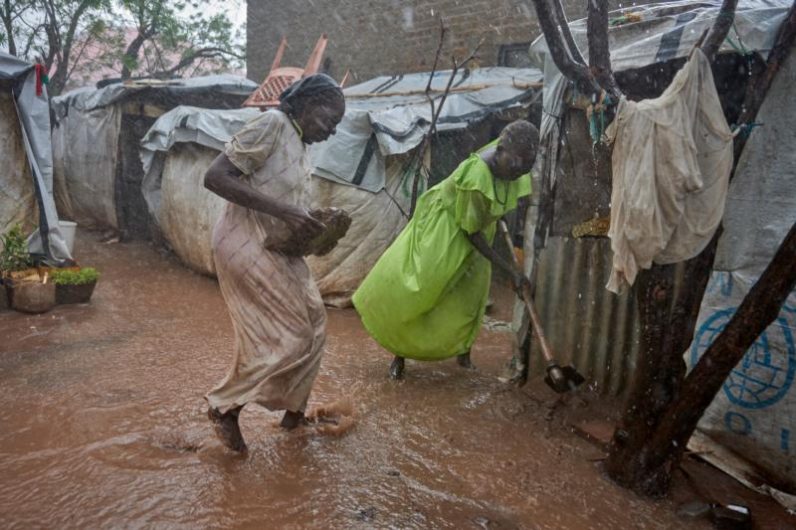 Rene Abdallah, left, and Anjima Fahal struggle to keep water out of their shelter during a heavy rainstorm April 16 in a displaced persons camp at Holy Family Catholic Church in Wau, South Sudan. A church leader says it is good that the implementation of the nation’s new peace plan is spread over several months. (CNS photo/Paul Jeffrey)

ROME (CNS) — After almost five years of civil war, South Sudan’s leaders agreed to a new peace plan in September, but its implementation is spread over several months. A church leader in the African country says that’s good news.

“In 2015, things weren’t properly done ahead of time. They didn’t work out the details before the transitional period. This time they’ve learned their lesson, and that’s why they gave themselves eight months to get everything arranged at all levels of government. If the two parties continue in good faith to implement the agreement, things will work out better than before,” Msgr. Taban told Catholic News Service during a visit to Rome.

The September agreement, signed by Salva Kiir, president of South Sudan, and his major adversary, the former vice president and rebel leader Riek Machar, also differs from earlier agreements in that it is explicitly backed by Sudan and Uganda, whom many have criticized for playing proxy politics in South Sudan.

Msgr. Taban was forced to flee his diocese when fighting broke out in late 2013 and has been based in Juba ever since, though he makes prolonged visits to the diocese, including parts that are controlled by rebels.

He said the city of Malakal, where he lived before, remains largely abandoned.

“People have a strong desire to return home. But they want to be sure they’ll be safe. If no more fighting happens during the coming months, people will slowly gain confidence and start to come back. They’ll need humanitarian assistance for six months or a year so that they can survive, because they’re coming home to houses that were burned and looted. But after that they’ll be able to live on their own,” he said.

A Vietnamese nun who works in the war-ravaged south of the country said people are watching closely, but events on the ground are discouraging.

“We hear about the peace agreement on the radio, but peace doesn’t yet exist at a local level,” said Sister Rosa Le Thi Bong, a Vietnamese member of Sisters of Our Lady of the Missions who works with Solidarity with South Sudan in Riimenze, where she lives in the middle of thousands of internally displaced people who sought refuge there from marauding soldiers and rebels.

“The people say that there have been agreements before and those were broken. So, they’re not optimistic. They are waiting. And they’re not going home until they can see all the leaders of the country working together,” she said.

Msgr. Taban said waiting on political leaders is not enough, that civil society groups, especially the church, need to speak up.

“It’s up to the warring parties to work together to establish an environment where people will feel they can come home. But the church must also play a role, speaking with a strong voice, educating people that the time has come for us to live again as sisters and brothers. Let’s put the past behind. If we don’t, and if we continue to look at ourselves as different tribes, as enemies, then we’ll never have true peace.”

Taban said the church’s ability to play a constructive role during the peace process is hampered by internal problems.

“The people still have great trust in the church, but our leadership is not as strong as before. The people admire and respect the role of bishops, but of our seven dioceses, only three have bishops. The rest have administrators. That has weakened our witness,” he said.

Msgr. Taban, who was named an apostolic administrator in 2009, said he raised the issue with Pope Francis during a visit of the country’s bishops and administrators in September.

“We told the Holy Father that if people hear messages from bishops, they listen better. They will say, ‘This is the big man who is talking to us.’ We need that proper leadership, so we can once again play a powerful role. Naming bishops will strengthen the leadership of the church, and that will help the peace process because the voice of the church can be brought to bear on the challenges to consolidating the agreement on the ground,” Msgr. Taban said.

NEXT: Solidarity with South Sudan celebrates 10 years of difficult mission