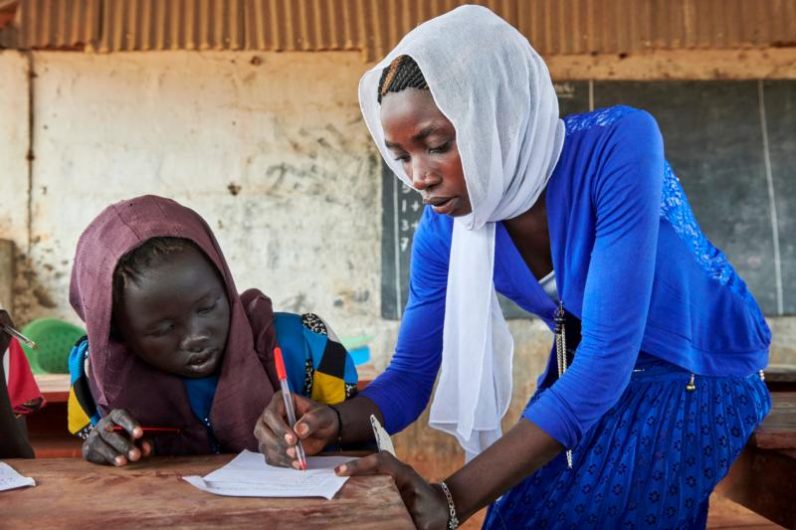 Basamat Alnoor Jakolo Aldabi teaches school in the Kaya Refugee Camp in Maban County, South Sudan, May 7. She received teacher training from a program sponsored by Solidarity with South Sudan, which celebrated 10 years of work in the African country during a Nov. 28 celebration in Rome. (CNS photo/Paul Jeffrey)

ROME (CNS) — An international group of Catholics has spent the last decade developing new leaders in war-torn South Sudan, but its members have paid a heavy price for their accompaniment of that country’s suffering people.

Solidarity with South Sudan was formed in 2008, three years after the country’s bishops appealed for help from the leaders of religious congregations. With encouragement from the Vatican, dozens of congregations joined together to fund and deploy personnel to then Southern Sudan. The country became independent South Sudan in 2011.

Over the decade since it sent its first volunteers to the new country, Solidarity has trained thousands of teachers, health workers and pastoral agents.

More than 500 teachers, for example, have graduated since 2013 from the Solidarity Teacher Training College in Yambio. And the Solidarity-run Catholic Health Training Institute in Wau has graduated 108 registered nurses and 41 midwives. It’s still expanding, and last year 21 percent of the nurses and 28 percent of the midwives certified in the country were graduates of the Wau school.

In addition to the schools it has built or rebuilt, Solidarity members also travel to remote villages, including those under rebel control, to train those unable to leave their communities, often conducting in-service training programs for professionals or long retreats for church catechists.

There are currently 31 religious and three lay volunteers from 18 countries and 19 congregations serving with Solidarity with South Sudan.

The work has not been easy. Solidarity members have been threatened, beaten and raped. The residence and teacher training college in Malakal was looted and damaged when violence broke out anew in 2013. The buildings remain in ruins, but Maryknoll Father Mike Bassano, a Solidarity member from the United States, serves as pastor in a displacement camp inside the United Nations base in Malakal.

A church leader from South Sudan said the group’s commitment to accompany his people has not wavered.

“Solidarity with South Sudan is giving a powerful testimony. They are trying to help our people to come back to their senses and appreciate that they are brothers and sisters sharing a country,” Msgr. Roko Taban, apostolic administrator of the Diocese of Malakal, told Catholic News Service.

Msgr. Taban was in Rome for a 10th-anniversary celebration of Solidarity’s work. The Nov. 28 gathering came during the group’s annual board meeting at the headquarters of the De la Salle congregation.

“They are different than most of the other foreigners who come to South Sudan. When NGOs face difficulties, they withdraw their personnel. But Solidarity always stays, remaining with the people and encouraging them. Even when it’s dangerous, they stay put. They have a zeal for their work, and they understood from the very beginning that this wouldn’t be easy. But they brought incredible dedication with them to my country,” said Msgr. Taban, who sits on the group’s board of directors.

Ethnic tension has been a key component of the country’s return to violence, and Solidarity tries to undercut tribal animosities by intentionally putting people from different backgrounds together.

“If you ask our graduates the most important thing they learned as they trained to be a teacher or a nurse, many will tell you how they came to respect and appreciate the people from different tribes with whom they studied,” said Sister Joan Mumaw, a member of the Sister Servants of the Immaculate Heart of Mary. 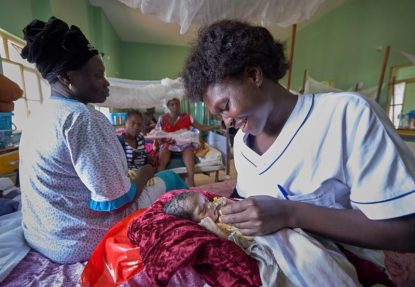 Nurse Annet Kojo feeds a 4-day old baby girl in the maternity ward of the St. Daniel Comboni Catholic Hospital in Wau, South Sudan, April 16. Kojo is a 2017 graduate of the Catholic Heath Training Institute in Wau, which is sponsored by Solidarity with South Sudan, a group that celebrated 10 years of work in the African country. (CNS photo/Paul Jeffrey)

Sister Mumaw is executive director of Friends in Solidarity, a U.S. group that supports the work of Solidarity with South Sudan.

Sister Margaret Scott, a member of the Sisters of Our Lady of the Missions from New Zealand, directs the Solidarity Teacher Training College in Yambio. She says a common understanding of citizenship will help South Sudan in its quest for peace.

“We work with students on their common South Sudan identity, on being one people. They make a huge effort to live together and work together. It’s not easy. They’re squashed up in the dorms. But every morning they pray together, Muslim, Christian, whatever. It’s part of our day. It’s part of their life,” Sister Scott said.

Solidarity represents an unusual model for Catholic mission. In an age when many congregations lack the personnel and funding to go it alone in many places, Solidarity has brought together men and women from different congregations to live and work together.

Sister Lissy Sebastian, who directs the Sisters of Our Lady of the Missions office in Rome, says practical necessity has encouraged creativity in mission.

“Solidarity with South Sudan represents the way forward for the church. Because no one group today has everything that it takes to bring about change, coming together makes sense, and it makes mission more interesting. We can share gifts, and all congregations have gifts to offer,” she said.

Several members of the Solidarity team have served since the beginning. One of them is Australian LaSallian Christian Brother Bill Firman. Today, he is the group’s executive director, based in Juba, and he says the mission has matured during the past decade.

“From the beginning, we’ve sought to stand beside the people. During the first few years, that meant trying to make the country more productive by training professionals and leaders, which is what the bishops requested we do,” he said.

“But then came the last five years, when some of our facilities have been attacked and our people assaulted. Mission at times became a matter of survival, but that allowed us to identify with Christ in his passion, and to gain credibility with the people of South Sudan simply because we refused to leave when it got uncomfortable.”

Firman says Solidarity’s board now has to wrestle with a demographic challenge.

“Religious congregations are suffering from an aging membership, with little influx of new members. That makes it more difficult to find people willing to come and stay. Too many people today just want to come for two or three years. But people in South Sudan have come to see Solidarity as different. They say we came to live with them and share their lives. That has been our strength, and now it has become our challenge,” he said.

NEXT: Pope leads prayers for peace in ‘tormented’ Syria