U.S. returns church bells to Philippines after more than 100 years 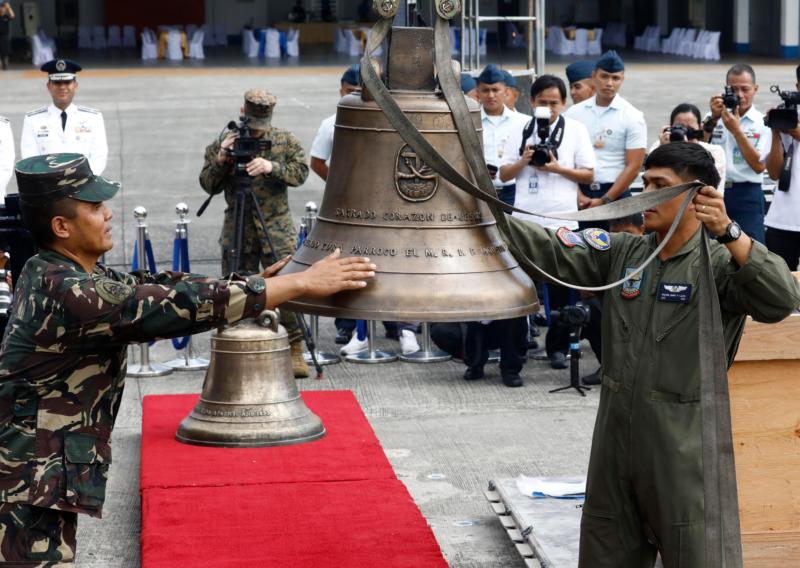 Philippine soldiers use a crane to lift three Balangiga Bells off crates during a turnover ceremony Dec. 11 at Villamor Air Base near Manila. After more than a century, the United States government has returned the three church bells swiped by American forces as war booty from the central Philippine town of Balangiga in 1901. (CNS photo/Rolex Dela Pena, EPA)

MANILA, Philippines (CNS) — After more than a century, the United States government has returned three church bells swiped by American forces as war booty from the central Philippine town of Balangiga.

Ucanews.com reported that, after years of repeated demands for their return, the bells were brought home aboard a U.S. military plane Dec. 11. The United States will formally turn over the bells to President Rodrigo Duterte in Balangiga Dec. 14.

U.S. Ambassador to the Philippines Sung Kim said the return of the bells “reflects the strong bonds and mutual respect” between the United States and the Philippines.

“It demonstrates our determination to honor the past and the sacrifices made together by Filipinos and Americans,” Kim said during a ceremony in Manila Dec. 11.

He said the return of the bells “heralds our bright future as friends, partners and allies,” adding that the two countries’ shared history is “enduring and deeply personal.”

“Every day our relationship has further strengthened by our unbreakable alliance, robust economic partnership, and deep people-to-people ties,” said the American ambassador.

The Catholic Bishops’ Conference of the Philippines expressed its gratitude to the government for its “vigorous efforts” to reclaim the bells.

Archbishop Romulo Valles of Davao, president of the conference, also thanked Duterte “for bringing a most successful and happy conclusion to all these efforts.”

He said the bells’ return “affords us an opportunity to understand and appreciate history better with a more mature perspective.”

“It also demonstrates that the path to healing and reconciliation may be arduous but is never impossible,” said Archbishop Valles.

Bishop Crispin Varquez of Borongan said the bells were an “early Christmas gift” to the people of his diocese. In a statement, the bishop urged Catholics not to deny the “tragic events of war that occasioned the misuse of the bells by the warring parties.”

“We must express sincere sorrow and repentance for the sins committed, leading to the loss of lives and the destruction of homes and properties,” said Bishop Varquez.

“But we must also forgive,” he said. “We must seek reconciliation not because it is politically correct, but because it is the demand of the Gospel.”

The taking of the bells and the American sacking of Samar came after Filipino freedom fighters ambushed and killed at least 40 American soldiers sitting down to breakfast Sept. 28, 1901. They were part of a 75-man American garrison stationed in town. It is said the bells were used to signal the attack.

Rebels disguised as women had smuggled weapons in small coffins into the church to attack the Americans.

At least 28 Filipinos also were killed in what historians say was the “single worst defeat” of American forces during the 1899-1902 Philippine-American War.

In reprisal, the Americans rounded up and killed some 5,000 Balangiga villagers. All were male residents over 10 years old. The incident became known as the Balangiga Massacre.

Two of the bells were kept at F.E. Warren Air Force Base outside Cheyenne, Wyoming, while the 9th U.S. Infantry Regiment in South Korea kept the third.

NEXT: Don’t be afraid to ask for things from God in prayer, pope says