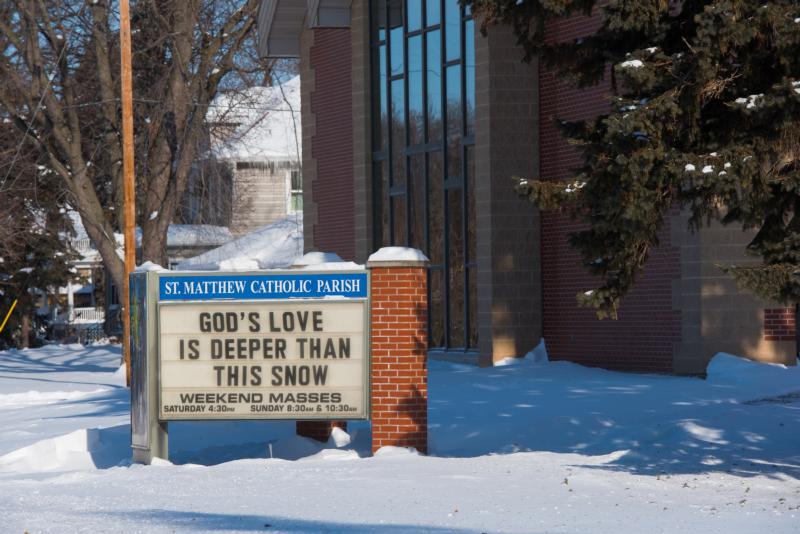 A marquee outside of St. Matthew Church in Allouez, Wis., offers a warm message to passers-by Jan. 30, 2019. Catholic schools and parishes were closed Jan. 30 and 31 due to extremely cold temperatures. A polar vortex brought wind chill temperatures to around minus-40 degrees both days. (CNS photo/Sam Lucero, The Compass)

WASHINGTON (CNS) — A broad swath of the Midwest experienced a deep freeze during the last days of January with historic low temperatures impacting daily routines.

Catholic schools, in the middle of Catholic Schools Week, were closed for days in several dioceses, as were several diocesan offices in Illinois, Minnesota, Iowa and Wisconsin.

The winter blast was to blame for at least eight deaths, including a University of Iowa student who was discovered behind a university building Jan. 30 and died later at the hospital of apparent weather-related causes, official said.

The 18-year-old pre-med student, Gerald Belz, was Catholic and his funeral service is being planned at his parish in Cedar Rapids, Iowa, said Father Jeff Belger, director of the university’s Newman Catholic Student Center. The priest told The Catholic Messenger, newspaper of the Diocese of Davenport, that the Newman center would be conducting a prayer service for Belz Feb. 4.

All around the Midwest, hospitals reported an increase of patients with weather-related symptoms. The Illinois Department of Public Health said at least 30 people had been to emergency rooms in the state for frostbite or hypothermia complaints by Jan. 30.

To keep people out of the cold, many businesses and schools closed, and even colleges and universities, which typically stay open in bad weather, canceled classes. The University of Notre Dame was closed Jan. 30 until midday Jan. 31, something which hasn’t happened in five years.

Governors in Wisconsin and Michigan declared states of emergency and ordered all state government offices closed; some state agencies also closed in Illinois.

The National Weather Service reported wind chill temperatures in Minnesota and North Dakota at 60 degrees below zero or lower, and other regions reported similar, although slightly higher, dangerously cold temperatures.

In Chicago, where temperatures dipped to nearly a record low Jan. 31 of minus 21, with a wind chill of minus 41, this was still not as cold as it was there during a 1985 cold snap when it was minus 27 degrees.

Msgr. Michael Boland, CEO of Catholic Charities of the Chicago Archdiocese, said he vaguely remembers that cold spell, but thinks this freeze just might feel colder because of the dampness and wind and the predicted increase of snow Jan 31.

When he was reminded that the temperatures were to go up, significantly, in first few days of February, the priest took it in stride and didn’t count on it lasting.

“God knows if it will happen again,” he said, of another cold spell.

In anticipation of the freeze, even for Wisconsin standards, the staff at the Catholic Herald, newspaper of the Diocese of Madison, Wisconsin, worked ahead and finished their Jan. 31 edition by Jan. 25, a Friday, instead of their usual Monday production day, which was Jan. 28.

Sam Lucero, news and information director for The Compass, newspaper of the Diocese of Green Bay, Wisconsin, posted a Jan. 30 blog https://bit.ly/2MN5VGU on the paper’s website called “A polar vortex kind of day,” highlighting, with video footage, feats of diocesan priests who threw water into the air to watch it freeze.

Father Mark Mleziva, vocation director for the Diocese of Green Bay, got this activity started with his Facebook video post where he pointed out Jan. 30 that the current temperature was negative 22 but it felt like negative 46 with the wind chill.

He said the worst part of the Arctic blast was “having to continually shovel the snow after it drifts.”

NEXT: With immediacy comes responsibility in the 24/7 social media world