With immediacy comes responsibility in the 24/7 social media world 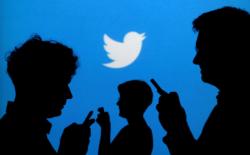 People use mobile phones in front of the Twitter logo in this 2013 illustration photo. (CNS photo/Kacper Pempel, Reuters)

WASHINGTON (CNS) — The image on social media was striking. A smiling teenager wearing a red “Make America Great Again” baseball cap and a Native American elder playing a drum and chanting, both staring at each other in a tense encounter.

Soon after the one-minute video of the Jan. 18 incident in Washington went viral on Twitter, commentators lashed out at the student, 16-year-old Nick Sandmann, and his schoolmates from Covington Catholic High School in Kentucky for allegedly disrespecting Nathan Phillips, the Omaha tribal elder.

Even church officials in the Diocese of Covington, the school and Archbishop Joseph E. Kurtz of Louisville, Kentucky, expressed concern about the students’ actions only to walk back their comments later when it was learned there was more to what happened and that the original video seemed to be selectively edited.

Church leaders in Covington continued to investigate the incident Jan. 31.

The ruckus over the encounter illustrates how influential social media have become in the 24/7 media landscape.

The incident also shows how willingly many social media users have come to accept — and offer their opinions about — what’s put out for wandering eyes to see without critical assessment, experts from across several academic disciplines told Catholic News Service.

“My sense is there’s something about the inner workings of social media platforms like Twitter and Facebook designed to do exactly what was done (which is) critical, viral and immediate judgment around a particular moment,” said Timothy O’Malley, director of education at the McGrath Institute for Church Life at the University of Notre Dame.

“Theologically, I see this as an effect of original sin and the manner of which human are scapegoating one another and pushing others outside of the community,” O’Malley said.

Joe Valenzano III, associate professor of communication at the University of Dayton, Ohio, said the immediacy of social media leads users to want to post their views without thinking of possible consequences.

“Snapshots and 280 characters don’t tell you the whole story,” he said. “You can take a piece out of anybody’s day and with the proper spin it can look negative. We wouldn’t want that done to us, so if you see that done to someone else, why would we approve of it?”

While social media has become a meaningful platform for people to connect and share helpful information, a small segment of posters have capitalized on — and contributed to — the deeply polarized culture in that exists today.

That concerns observers such as Jesuit Father Paul Soukup, professor of communication at Santa Clara University, and Angela Knobel, associate professor of theology at The Catholic University of America.

Father Soukup said the posted video was “made for reaction.”

“We are in a period right now of great unsettlement,” Father Soukup told CNS. “We’ve introduced new media and we’re still trying to react in the ways we’ve been accustomed to, which can’t keep up with what’s new.”

He compared the rise of social media as a primary means of communication to the cultural upheavals caused by the introduction of the printing press, the telegraph, the telephone and television. Each caused society to rethink how it related to others, he explained.

“We don’t know how to live with these new media” because of the ambiguity they present, Father Soukup said.

“This is the media eco-system: not to find the truth, but to maximize profit and advertising, and we fall into it because this is a platform to say my bit,” he said.

Knobel agreed, saying that there are plenty of users who would rather comment first “because then you’ll get all the retweets.”

“Nobody wants to understand the opinions of their opponents any more,” Knobel told CNS. “That lack of wanting to understand and lash out is evident here (in the Jan. 18 incident) as well.”

What’s a Catholic consumer of social media to do?

Pope Francis offered advice Jan. 24 in his message for the 53rd World Communications Day, which most dioceses will observe June 2. He said social media can be useful in uniting people, educating others and sharing information, but often is used for the wrong purposes to increase differences, fuel suspicion, spread lies and vent prejudice.

Forming strong communities, even online, requires people who are “animated by feelings of trust” and are pursuing a common objective, he said. “The community as a network of solidarity requires mutual listening and dialogue based on the responsible use of language.”

Others cautioned social media consumers to step back and consider how to react to a post before firing off the first thought that enters their mind.

“For whatever reasons, when we have a flash of anger (when viewing social media), when we’re thinking of something, we can type it out instantly almost without thinking more than when we’re speaking with someone,” said Paul Levinson, professor of communication and media studies at Fordham University.

He urged people to remember that “the brain is still control” because it is the originator of a thought or action. “That means we can put a response in a more constructive mode,” he said.

Amy Uelmen, a lecturer at the Georgetown Law School, pointed to St. Ignatius of Loyola in his correspondence advising the three Jesuit theologians assigned to the papal legates presiding over the Council of Trent, which opened in 1545 and was prompted by the Protestant Reformation.

“Be slow to speak. Be considerate and kind, especially when it comes to deciding on matters under discussion, or about to be discussed in the council,” St. Ignatius wrote.

“Be slow to speak,” he repeated, “and only after having first listened quietly, so that you may understand the meaning, leanings, and wishes of those who do speak. Thus you will better know when to speak and when to be silent.”

Uelmen, the author of “Five Steps to Healing Polarization in the Classroom,” called such discernment “countercultural” in a world that encourages hastiness and negativity.

“I as a Christian need to ask myself, ‘How do I live out my Christianity, which means respecting the dignity of every single person I meet every day?’ Yes, it’s going to be countercultural. There’s so much in our world that is pushing us toward easy caricatures to dismiss each other and not take the time to recognize the face of God in each person and recognize the dignity of each person as a child of God,” Uelmen said.

“That’s the call of the Christian vocation: in some way to be a sign of contradiction in a world that places so much emphasis on images and reacting to the first image that you see, to develop this kind of discipline and virtue,” she added.

All that considered, there’s one other avenue to follow.

“Stay off Twitter,” Valenzano at the University of Dayton said with a laugh. “As flip as it sounds these days, that tends to be my default.”