Auxiliary bishops named for Archdiocese for the Military Services 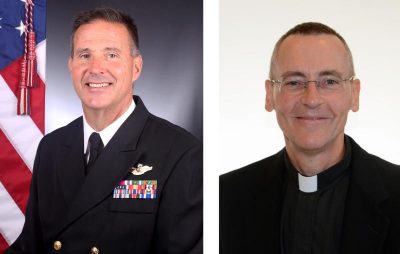 Bishop-designate Coffey, 58 is a priest of the Archdiocese of Philadelphia who has served since 2001 as a U.S. Navy chaplain, holding the rank of captain.

Bishop-designate Muhm, 61, is a priest of the Archdiocese of New York and since November has served as administrator of Most Precious Blood Parish in Walden, New York. He served as a Navy chaplain from 2008 until last November.

The appointments were announced Jan. 22 in Washington by Archbishop Christophe Pierre, the Vatican nuncio to the United States.

The bishops-designate will succeed Auxiliary Bishops Richard B. Higgins, who turns 75 Feb. 22 and will be retiring, and Robert J. Coyle, who was transferred to the Diocese of Rockville Centre, New York, in February 2018.

Archbishop Timothy P. Broglio, who heads the military archdiocese, will ordain the new bishops March 25 in the Basilica of the National Shrine of the Immaculate Conception in Washington.

Archbishop Broglio welcomed his two colleagues in ministry to their new roles in serving the 1.8 million women and men in the U.S. military around the world.

“I am delighted that both candidates have accepted to serve in a new way,” he said in news release from the archdiocese. “They bring vast experience and deep pastoral solicitude to their new role.”

Bishop-designate Coffey in a statement credited those who have led the Philadelphia Archdiocese over the years — Cardinal Anthony J. Bevilacqua, Cardinal Justin Rigali and Archbishop Charles J. Chaput, Philadelphia’s current archbishop — for allowing him to serve in the military as a chaplain.

Meanwhile, Bishop-designate Muhm in a statement said he was “humbled and honored” by his appointment.

“While we had just gotten used to having him back with us as a pastor, after decades of faithful priestly ministry as a Navy chaplain, it’s a big part of the legacy of this archdiocese to share its treasures of priests, sisters, lay faithful and gifts with the wider church,” Cardinal Dolan said.

Archbishop Chaput said the Archdiocese for the Military Services and the people it serves “are receiving a gift from the Holy Father” in Bishop-designate Coffey.

“I offer him heartfelt congratulations on behalf of the priests, deacons, religious, and lay faithful of the Archdiocese of Philadelphia,” he said in a statement. “I’m confident that he will carry out his duties with great energy, compassion, zeal and fidelity, and I pray that the Holy Spirit will strengthen him as a successor of the Apostles.”

Born May 31, 1960, in Rochester, Minnesota, Bishop-designate Coffey was the fifth of nine children of Dr. William F.X. Coffey and Roseanita Schubert Coffey. He was raised in Philadelphia and ordained to the priesthood in 1996.

Prior to entering St. Charles Borromeo Seminary in Philadelphia, he worked for a year in Europe as an automobile salesman, selling cars to Americans in the military in Germany and Belgium

While studying for the priesthood, he entered the U.S. Navy Chaplain Candidate Program in 1992. He served in the Navy Reserve for nine years. Since 2001, he has been chaplain in the Navy and a recruiter for the chaplain corps.

The Military Chaplains Association awarded Bishop-designate Coffey its Distinguished Service Award as chaplain of the year in 2004.

Bishop-designate Muhm was born June 27, 1957, to the late James and Anne Muhm in Billings, Montana, and raised in Denver. He was ordained to the priesthood in 1995.

Prior to entering the seminary in 1989 to study for the priesthood for the Archdiocese of New York, Bishop-designate Muhm was commissioned a Navy ensign in 1981. He left active duty and worked as an accountant from 1986 to 1989.

In 1998, the bishop-designate returned to active duty as a Navy chaplain. His assignments included Naval Air Facility Atsugi in Japan; aboard the USS Wasp and USS Bonhomme Richard; a post-9/11 deployment in the Arabian Sea; the Training Support Center Great Lakes in Illinois; Anbar province, Iraq; the U.S. Naval Academy; and Camp Lejeune, North Carolina.

He retired from the Navy May 1, 2018, and was on sabbatical until Dec. 1, when he became administrator of Most Holy Blood Parish.

NEXT: Archbishop reflects on effects of racism, calls for ‘repentance, action’