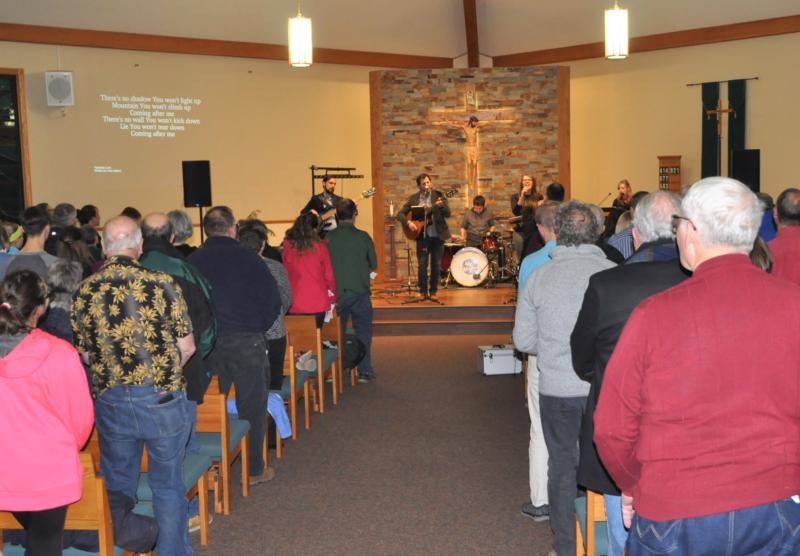 Worshippers gather Jan. 20, 2019, at St. Peter Church in Cameron, Wis., to give thanks for Jayme Closs’ escape from abduction. The ecumenical service brought a sense of closure and relief to the community, whose members have wept and prayed together since the October murder of Jim and Denise Closs and the abduction of Jayme, their 13-year-old daughter. (CNS photo/Anita Draper, Catholic Herald)

CAMERON, Wis. (CNS) — Faith runs deep in Barron County. The story of Jayme Closs’s abduction and escape is one of hope and courage, but it is also a story of faith, prayer and triumph over evil.

The ecumenical service brought a sense of closure and catharsis to the community, whose members have wept and prayed together since the October murder of Jim and Denise Closs and the abduction of their 13-year-old daughter, Jayme, but the joy was muted by remembrance of their deaths and acknowledgement of a young girl’s immeasurable suffering.

Father John Gerritts, pastor of St. Patrick Parish in Hudson, and supervising pastor of parishes in the region, led the prayer service, which included prayers of thanksgiving for law enforcement, schools, friends, the community, Jim and Denise Closs, Jayme and the blessings of God.

Most members of the media were barred from attending. The 300-seat worship area was filled to capacity, with overflow seating in the hall.

We pray to God in times of need, parish director Patty Gerber explained in her greeting, and so it follows that we show our gratitude when our prayers are answered.

“Lord, we are grateful that faith has triumphed over evil,” Father Gerritts said in his opening prayer.

An outsider to the parish, Father Gerritts characterized Jayme’s return as “one of the great miracles of our time” and praised a community that has endured trials and tribulations in the last two years — a deadly, record-breaking tornado and the murders of the Closses and abduction of their daughter — without blaming one another, pointing fingers or losing hope.

“You have been a shining star,” he said, “a gift to our society, to our generation. You’ve been courageous. You’ve been hope-filled. You’ve been faith-filled people. You can hold your heads high.”

St. Peter is Jayme’s family’s home parish. The funerals for her parents were celebrated in that church. She is now living with her aunt, Jennifer Smith, who also belongs to the parish.

On Jan. 10, Jayme freed herself from the home of her abductor, Jake Thomas Patterson, in the town of Gordon in northern Wisconsin. Patterson has been charged with the Oct. 15 shooting deaths of her parents and with abducting the girl and holding her captive in his home for nearly three months.

At the service, the theme of Barron County Sheriff Chris Fitzgerald’s address was never giving up hope — and gratitude to a community that encouraged, supported and continually fed his staff.

At one point, more than 340 officers — his 87 employees, state and local law enforcement and federal officials — were all together for one briefing.

Today, they are thankful for Jayme’s strong will to survive.

“We will never give up hope again, and we never did,” he said.

Also, they enjoyed the cinnamon rolls.

“We’re the only people in a tragedy that gained weight,” he joked.

Pastor Chad Halverson, of Barron Foursquare Gospel Church, acknowledged Christians are all “part of one amazing family,” and added, “We are privileged to lift up our law enforcement tonight.” He prayed for law enforcement, for their sacrifice and service, and for personnel who worked on the case.

Diane Tremblay, administrator of the Barron School District, told Jayme, “We are so grateful for you,” and praised the community’s response to the tragedy.

“No wonder this community is so strong,” she said. “There are solid, resilient pillars everywhere.”

Tremblay spoke of finding “more meaning in everything” at the first Mass she attended after Jayme’s return — she quoted Isaiah 40:1, “Give comfort to my people, says your God,” among others — and spoke of keeping the Closs family in her personal prayers and saying the rosary for an increase in faith, hope and charity.

“Jayme presents an increase in all three of those virtues … and that’s nothing short of extraordinary,” she added.

Pastor Ron Mathews, of First Lutheran Church in Barron, offered the prayer for schools: “We pray in gratitude, Almighty God, for the gift of those who serve in our schools,” he said. “They dry tears. Clean up messes. Provide warm meals, break up fights. Encourage kids to do their best.”

He asked God to grant them wisdom as Jayme returns to class.

Aleigha, the stage name of Aly Schissel, was on tour when Jayme was taken. She was inspired to write “Labyrinth,” a song about hope, strength and courage, and dedicated it to Jayme at every performance.

Jayme’s cousin, Amanda Hoard, wept before offering a prayer of thankfulness for friends, and a prayer for healing.

Barron Mayor Ron Fladten quoted his father’s favorite Bible passage, Philippians 4:13: “I can do all things through Christ, who strengthens me.”

“We had a dark cloud hanging over our community,” Fladten said. “Then God removed it. Now the sun shines through. Jayme is home.”

Melissa Salmonson offered the prayer for the community, and Lindsey Smith led a prayer for Jim and Denise Closs, thanking God for the gift they were to Jayme.

Jayme’s friends, Katie Kohel and Bailey Hauck, said a prayer for her. Asked to describe her before the ordeal, “We would have said she was kind and caring, quiet and talented,” but now, “we’d also say strong, courageous, inspiring and loved so much.”

Gerber led a prayer for Jayme, “coming from a mother’s heart,” thanking God for the gift of Jayme, “in gratitude for the gift of joy and unconditional love she brought into her parents’ lives.”

“Thank you for driving out the darkness, and allowing Jayme to share her life with us,” she said.

Draper is editor/reporter at the Catholic Herald, newspaper of the Diocese of Superior.

NEXT: Auxiliary bishops named for Archdiocese for the Military Services