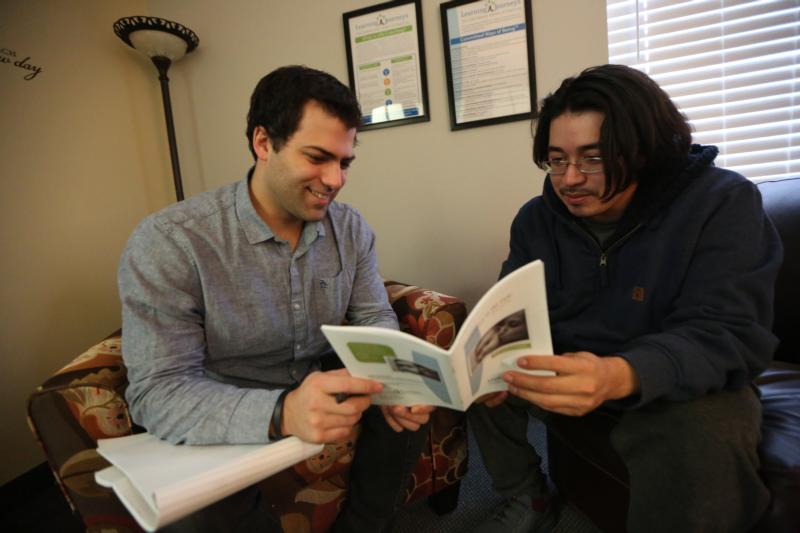 Luke Spehar, a certified life coach, talks with Allen Diaz in 2018 at Pregnancy Choices in Apple Valley, Minn. Diaz is participating in a program for expectant fathers. (CNS photo/Dave Hrbacek, The Catholic Spirit)

APPLE VALLEY, Minn. (CNS) — When Allen Diaz’s girlfriend — who is pregnant — visited Pregnancy Choices pregnancy help center in Apple Valley last year, it led to more help for Diaz as an expectant father than he could have imagined.

“It helps a lot when you’re a new father, and on top of that, they give you a lot of very good tips,” said Diaz, 29, who participated in Pregnancy Choice’s life coaching program for expectant fathers.

Pregnancy Choices, part of the Elevate Life network of centers serving clients with unexpected pregnancies, is the only pregnancy resource center in Minnesota with a paid certified life coach for fathers, according to Vaunae Hansel, who is president of Elevate Life.

The program helps fathers prepare for their new responsibility and support the mother. Luke Spehar, the center’s certified life coach, has been working with fathers for the past two years.

“I think the biggest thing we offer men here is a listening ear,” Spehar told The Catholic Spirit, the newspaper of the Archdiocese of St. Paul and Minneapolis said. “We really just listen and give them a voice to share what’s going through their heart and mind as they’re trying to navigate an unexpected pregnancy.”

When Spehar began working with Pregnancy Choices, he said he couldn’t find any men’s ministries at other pregnancy help centers to learn from. Also a professional Catholic musician, Spehar came to Pregnancy Choices looking to volunteer, but he was asked to become a life coach because of the growing presence of male clients coming with their partners.

“We kind of have had to blaze a trail with it so far,” Spehar said.

“As they are achieving these small successes, their belief in themselves and self-efficacy grows, and they can have fundamental change,” Hanel said. “We also believe that coaching is allowing us to act the way Jesus would want … when they walk through our door.”

“We love them unconditionally, and we don’t put a judgment on them, and we recognize that it’s their choice no matter what,” Hanel added. “But by coaching, we’re giving them a chance to see that there’s a whole possibility for them to choose life that they maybe never saw before.”

Spehar said life coaching helped Diaz support his girlfriend when she had hesitations about continuing the pregnancy. Diaz and his girlfriend are expecting the baby in April.

Coaches at Pregnancy Choices go through 150 hours of training in six to 12 months to receive accreditation from an international coaching school. Both male and female clients meet with their coaches for eight sessions. Coaching is about asking the clients “powerful questions” that help them discover what they really want, Hanel said.

“They can see that they’re not in harmony (with their values) when they’re considering abortion, and many times it’s the first time that they thought about the impact of that decision, in that they’re acting in a way that doesn’t align with who they want to be,” Hanel said.

For fathers, that process often begins when they arrive at Pregnancy Choices with the mother for an ultrasound, or when the mother is informed about the coaching program for fathers.

“Every man that crosses the door we treat as a client,” Hanel said. “We offer an intake form to him just like we do (for) the woman because he is in the unplanned pregnancy as well.”

The number of men seeking coaching has increased enough that Pregnancy Choices recently hired a second coach, Hanel said. The staff has seen that the fathers are “very interested and eager to participate in the pregnancy and really begin to see what their role is,” she said.

Spehar said he uses coaching to “awaken (men) to their own gifts and values and talents and desires” in the sessions. He helps them articulate their values because “so often, that what’s causing maybe a tension … they value something that is either being honored or dishonored, and that’s creating tension within the relationship or dissatisfaction with a job that filters into their family life.”

Diaz said the coaching sessions were about discovering for himself what he could do as he faced an unexpected pregnancy.

Part of the fathers’ program entails video education on topics such as anger management, parenting, babies’ sleeping safety and car seat safety. Spehar also can draw on his own experience as a husband and father of two if the clients have questions for him.

Spehar sees the need for more pregnancy help centers to reach expectant fathers and for the whole pro-life movement to better uphold the dignity of fatherhood.

“I think it’s not only the culture that’s bought into the concept that it’s only the mother’s choice, but I think it’s also bled into the life movement,” Spehar said. “I think that’s something we’re trying to push back against. It’s to really give men a dignity to say it’s both of their decision, and we need to give that man a voice and dignity to say, ‘(I) can actually have a voice here.”

Hanel sees fathers as having an irreplaceable role in families and helping mothers in unexpected pregnancies move forward in raising their children. She noted that the biological father will always be the father of the child, no matter what happens in the relationship.

“It can make the complete difference for that family whether they’re romantically connected or not, whether they’re co-parenting in separate homes, or living together and co-parenting,” Hanel said. “To have that father be engaged in those kids’ lives, it gives (the mother) a little bit more financial stability, gives her emotional support; it gives her physically someone else who’s going to (help) manage all of it. It’s night and day.”