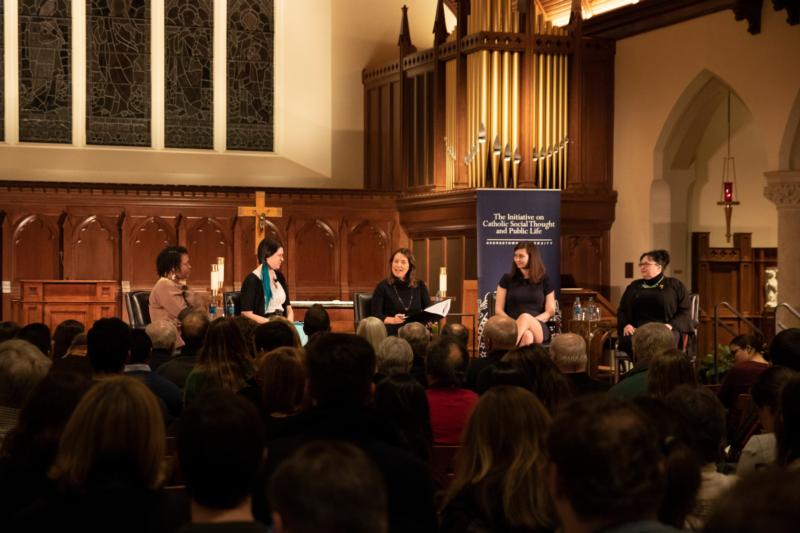 WASHINGTON (CNS) — Abortion not only goes against the dignity of every living being and is rooted in violence and misogynistic notions of male superiority, but political solutions, in the current divided climate, can be troublesome as well.

Those were among the view expressed by members of an all-woman panel at Georgetown University Jan. 15 discussing “Resisting the Throwaway Culture,” along with a resounding “no” in answer to the question as to whether feminism requires supporting an abortion.

The panel discussion was sponsored by the university’s Initiative on Catholic Social Thought and Public Life and came just days before the annual March for Life in Washington marking the anniversary of the Roe v. Wade decision legalizing abortion.

“The question abortion poses is a problem of the female body itself,” said Gloria Purvis, host of the radio show “Morning Glory” on the Eternal Word Television Network. “What is more misogynist than the idea that the male body is human perfection?”

Serrin Foster, president of Feminists for Life, grew up in the Washington area and observed: “When I thought of abortion, growing up in this area … I never heard a happy story. When I was growing up, it was always ‘the lack of.’ I just kept on thinking we have to solve this.”

Aimee Murphy, executive director of Rehumanize International, a nonsectarian human rights organization, said that in being pro-life, women “really do represent a rejection of the idea that we need violence in order to be equal.”

Her organization had applied to be a sponsor at the Women’s March in January 2017, which drew more than a half-million participants, but Planned Parenthood intervened to reject the application because of her group’s pro-life stand.

“Ultimately, we still went and participated,” Murphy said. “We were out there, and people came up and said, ‘We’re glad that you’re here.'”

Political solutions to the abortion issue are made more difficult, the panelists said, by President Donald Trump’s rhetoric on various issues.

Murphy observed that Trump has shut down the federal government over his insistence for a wall stretching across the U.S.-Mexico border, “but Planned Parenthood still got funded.”

She was referring to Trump signing a short-term bill in November to keep the government open through Dec. 7 and avert a government shutdown ahead of November’s midterm elections. That measure included funding for the abortion provider.

Since Dec. 22, the government has been partially shutdown over Trump wanting $5.6 billion for a wall and various border security measures and refusing to sign any bill to fund the government that does not include that money.

On Jan. 10 three Republican women in Congress — two in the House and one in the Senate — have introduced bills to eliminate taxpayer funding for Planned Parenthood. They said it would codify Trump’s Protect Life Rule to exclude abortion providers, including Planned Parenthood, from funding under the Title X Family Planning Program.

Murphy called herself “simultaneously grateful for the few things he has done to demonstrate a pro-life ethos, but also distressed that the president “says things that are fundamentally dehumanizing,” such as using the word “animals” in describing some unauthorized immigrants last May.

(Media reports said he labeled all immigrants “animals”; his spokeswoman said Trump made that comment in reference to MS-13 gang members, who are known known for committing brutal crimes.)

Trump spoke at last year’s March for Life rally via video hookup from the White House, and said he “strongly supported” a ban on abortions at 20 weeks’ gestation known as the Pain-Capable Act. The measure has passed the House twice, but failed to reach the 60-vote margin in the Senate required to overcome filibusters.

He also, from the moment he took office, reinstated the so-called Mexico City policy, requiring foreign nongovernmental organizations to certify that they will not “perform or actively promote abortion” for family planning as a condition for receiving U.S. government funds.

Trump will not be speaking at this year’s rally Jan. 18, but Vice President Mike Pence will address the March for Life Rose Dinner that evening.

“I think even if we make a deal (on abortion restrictions), we have to call him out” on his rhetoric, Purvis suggested, citing Trump use of a vulgarity in January 2018 to describe Haiti and African nations in talking about immigration.

“These things go against our beliefs as pro-lifers,” Purvis said. “If we really believe this, we want him to come all the way with us. I think too often we want to be loyal to a political party when we ought to be loyal to Jesus Christ.”

With Congress, however, Foster, citing her own experiences, thinks there’s room for hope. “What’s so shocking about right and left on Capitol Hill … is that both sides really care about women. They are about the poor. You can meet people where they are.”

NEXT: By helping expectant fathers, center upholds ‘dignity of fatherhood’