Catholic education official is used to thinking outside the box 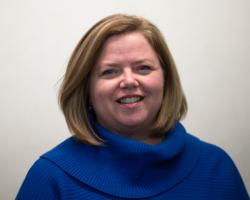 WASHINGTON (CNS) — Mary Pat Donoghue, the new education secretary at the U.S. Conference of Catholic Bishops, knows that Catholic schools have to be creative not just to compete, but sometimes to survive.

She knows this firsthand because she’s been there.

As a former principal of a Catholic elementary school just outside Washington, Donoghue was hit with the major factors that could close a school and almost did. St. Jerome in Hyattsville, Maryland, the school she attended as a student, and where she taught and was its vice principal before becoming principal, had rapidly declining enrollment and escalating debt when she became its principal in 2009.

That same year, the school was given one year by the Archdiocese of Washington to turn this around.

It did this and then some.

Ten years later the brick school building today has waiting lists for nine of its classes and is in the process of adding one class per grade each year. Families are moving to the area just to attend the school which now goes by the name St. Jerome Academy and follows a classical school curriculum with an emphasis on Greek and Roman studies.

This model, followed by a handful of Catholic schools across the country, was relatively unheard of for Catholic schools a decade ago. A group of parents, facing the school’s potential closing, came up with an entirely new curriculum, working with Donoghue, the faculty and the pastor.

The idea brought new life to this struggling school which opened in 1943 and was run by the Sisters of Notre Dame de Namur, who had been teaching religious education at the parish since 1914. It also inspired other Catholic schools to follow a similar model.

When Donoghue left St. Jerome’s in 2016, she served as a Catholic educational consultant, advising other schools looking to try something new.

And last August, she took on something new herself as head of the USCCB’s Secretariat of Catholic Education.

In announcing her appointment, Msgr. J. Brian Bransfield, USCCB general secretary, said: “Mary Pat has brought a strong enthusiasm for the special role of Catholic education in the evangelical mission of the church.”

In a Jan 9 interview with Catholic News Service, Donoghue noted that many Catholic schools “are at the end of their runway,” meaning they need to come up with ways to exist and thrive that are not tuition dependent.

As she sees it, Catholic schools have much to offer and their strength lies in their long sense of tradition and integral formation of students.

She said the attempts to emulate public schools don’t work because then Catholic schools are not distinguishing themselves.

She acknowledged that the big challenges today for Catholic schools are sustainability and affordability and stressed that schools need to find new ways to address this, not necessarily by taking up a classical curriculum either. She said some of the new ways have included tuition-free schools with parish stewardship or the Cristo Rey model of a corporate work-study program where students work one day a week, earning job experience and a wage for tuition.

Today there also are regional Catholic schools and consortiums where schools share resources, all which are branching out from the traditional parish school model.

But for all the current and future changes for Catholic schools, one thing remains the same, Donoghue noted, pointing out that the goal of Catholic education is “to know, love and serve God” and “that hasn’t changed.”

And despite challenges Catholic schools face, she is optimistic, noting in true Catholic form that she “always has hope.”

“The Holy Spirit will direct our efforts,” she said.

NEXT: Catholic Schools Week celebrated across U.S. this week