For Sister Carol Keehan, faith and health care go together 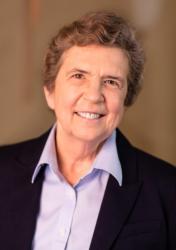 WASHINGTON (CNS) — Sister Carol Keehan, a nurse before she became a woman religious, used to think she would spend most of her days — up to retirement — working in an emergency room.

For the Daughter of Charity, who has been at the helm of the Catholic Health Association for the past 14 years and is about to retire this summer, that deep understanding and appreciation of the urgent demands and needs of a hospital emergency room have never left her.

Sister Carol not only had on-the-ground experience as a hospital nurse, but she quickly moved up to be supervisor of a children’s hospital in Florida, vice president for nursing at two hospitals and then president and CEO at these hospitals before her current role: president and CEO of the organization of more than 2,200 Catholic hospitals, nursing homes, long-term care facilities, systems, sponsors and related organizations in the United States.

The 75-year-old who wears a Fitbit and a lapel pin of her order — known for its ministry to the sick and poor — is dogged in her belief that everyone should have proper health care, not just those who can afford it and that no one should have to choose between health care, food or rent and forgo necessary treatment just because they don’t have health insurance.

That’s why she worked hard behind the scenes to help craft the language of the Affordable Care Act passed by President Barack Obama in 2010, made effective in 2014, and then promised to be repealed and replaced by President Donald Trump once he took office two years later.

One of the pens Obama used to sign that legislation and photos from that day are in a frame hanging just outside her office door.

At a 2015 CHA gathering in Washington, Obama thanked Sister Carol for her steadiness, strength and steadfast voice. “We would not have gotten the Affordable Care Act done had it not been for her,” he added.

Although Trump’s campaign pledge to do away with Obamacare, as many call it, hasn’t happened, parts of the law have been chipped away. In 2017, Congress attempted, but failed, to repeal it. Later that year it eliminated the penalty for those without health insurance and last year, Trump issued new rules making it easier for people to buy cheaper insurance that covers fewer health care services. In last year’s midterm election campaigns, Democrats emphasized keeping the health care law’s protection for people with pre-existing medical conditions.

Currently, according to a Gallup poll published Jan. 23, the percentage of U.S. adults without health insurance has reached a four-year high, 13.7 percent, in the last quarter of 2018 and women and younger adults are the least-insured groups. This number is less than 18 percent, which it was in the first quarter of 2014 before the ACA went into effect.

Sister Carol, who spoke with Catholic News Service from her 10th floor corner office in Washington Jan. 22, said she believes the “best pieces of the ACA will survive” and she also thinks it can still be improved, something she has said from the start.

In 2017, when Congress attempted to get rid of the health care law, she told CNS it was far from perfect, but it was still “an incredible step forward.” She also appreciated that the U.S. bishops — who did not support the final version of the legislation in 2010 — warned Congress that any replacement of it shouldn’t “create other unacceptable problems, particularly for those who struggle on the margins of our society.”

The bishops in 2010 withheld their support for the measure because of what they saw as “fundamental flaws,” such as no conscience protection and not excluding elective abortions from health plans subsidized with federal funds.

Sister Carol faced tremendous backlash for her support of the ACA, challenged in the courts by a number of dioceses and religious orders and other religious employers for its mandate that most employer insurance plans include coverage for artificial birth control, sterilization and drugs that induce abortions. The CHA did agree with the bishops that the government needed to expand its definition of religious employers exempt from the mandate.

“From my perspective, it was really challenging,” she said, noting that she, as someone “vowed to the church” and who had spent 10 years in a hospital’s perinatal center was “accused of not being pro-life” and was taken off Vatican commissions and speaking engagements. She said people screamed at her, picketed events she attended and wrote letters to her community asking them to kick her out.

Years after this, she takes the long view of it, saying that what she endured was nothing compared to what parents go through when they can’t afford to get proper care for their child with cancer, heart disease or diabetes or when they can barely afford annual physicals and immunizations.

“That is heartache,” she said.

She describes her tenure at the CHA as a great honor which allowed her to “be in the public square to give voice to the needs of people and the dignity of people.”

Fittingly, last year she received the Catholic in the Public Square Award from Commonweal magazine.

Sister Carol’s curriculum vitae lists a page and a half of awards, some of which are in her office, among papers, photos and religious art. She also has an equal number of board membership listings but as she put it, for all the people and interaction she will miss when she retires, she is OK with not having to plan another board meeting.

Her models in health care ministry include members of her order, who minister to those in need around the world. Just days after speaking with CNS she planned to take a few vacation days to volunteer with these sisters at a hospital they run in Bethlehem, West Bank.

Sister Carol also is grateful for Pope Francis, saying he has “done health care such a great service by pointing out the importance of it” and how people who are hurting from physical or mental illnesses need to be made whole again.

“That’s the Gospel in action,” she said. “We don’t take care of people because they deserve it but because they are hurting. That’s what our Lord did in the Gospel.”

But for the church in the United States to continue its mission, in health care and other areas, she said it needs to recover from its current crisis.

And her prescription for healing in this case is up to the church at large. As she puts it: “It’s up to all of us to make the church what it needs to be.”

NEXT: Catholic education official is used to thinking outside the box