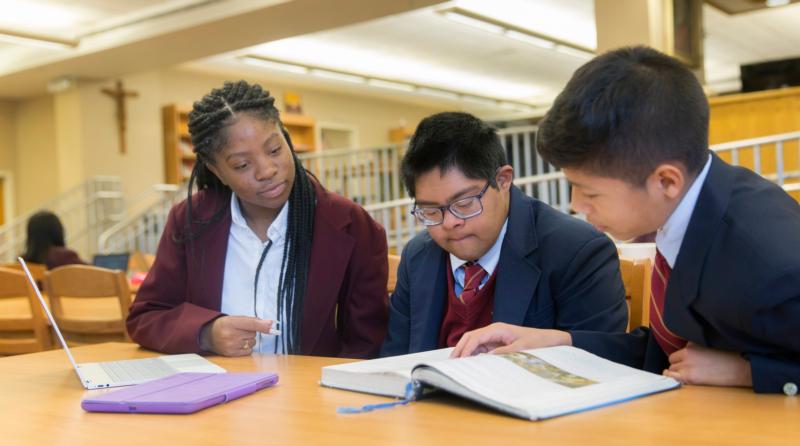 Raymond Tetschner, center, studies with some of his fellow students in 2018 at Bishop McNamara High School in Forestville, Md. He is the first student to be a part of the school’s new St. Andre Program, designed to support students with intellectual disabilities in an inclusive setting. (CNS photo/Jaclyn Lippelmann, Catholic Standard)

FORESTVILLE, Md. (CNS) — When asked what his favorite thing is about attending Bishop McNamara High School in Forestville, 10th-grade student Raymond Tetschner said: “It is a family.”

Raymond is the first student to be a part of the school’s new St. Andre Program, which is designed to support students with intellectual disabilities in an inclusive setting.

“I’ve been in Catholic education for 30 years, and I think a Catholic school should be a place for all children,” said Marco Clark, president and CEO of Bishop McNamara. “Often, there are barriers of socioeconomics, barriers of learning styles, barriers of geography. One of those barriers should not be intellectual disabilities. If we are truly a pro-life community, that means we need to be pro-lifespan.”

The new program, which complements the school’s already existing St. Joseph Program for students with high-incidence disabilities, has been in the works for years as the school has been researching how to develop it.

Abigail Greer, the school’s director of student support, and Anne Dillon, who now serves as the director of special education for the Archdiocese of Washington, visited the Academy of the Holy Cross in Kensington last year to see how they run their program that serves students with developmental and intellectual disabilities. Then, just a few months later, Greer met Michelle Tetschner, Raymond’s mom, who had recently moved to the Washington area. The teen called the meeting a “God-cident.”

“It was always my dream to have Raymond in Catholic high school,” said his mom, who recalled how in Arizona, four Catholic elementary schools said “no” to accepting Raymond before one said “yes.”

“We had a real crisis of faith when four said ‘no,'” she explained, adding that sending him to a Catholic school “is especially deep in our hearts” because Raymond was adopted through Catholic social services.

After Tetschner and Greer met, Raymond applied to the school and was accepted, and the family moved to be closer to Bishop McNamara.

To fund the new program, Bishop McNamara High School received a grant from the Catholic Coalition of Special Education, which has awarded nearly 60 grants to 30 Catholic schools in eight Maryland counties totaling more than $1 million since 2004. The program also received funding from Tribute 21, a component fund of the Community Foundation for the National Capital Region, dedicated to raising awareness and raising funds to support those with Down syndrome.

Raymond and his parents work with his teachers to develop his schedule, which includes a mixture of college preparatory classes, electives and one-on-one instruction with the coordinator of the St. Andre Program. Raymond said his favorite class is theology because he likes to talk about God.

Michelle Tetschner said if her son attended a public school, he would have been segregated from the rest of his peers, while at Bishop McNamara he is in the same classroom as the other students for most subjects.

“Being fully included not only helps Raymond. It helps other kids as well,” she said, making them less fearful of interacting with people who have disabilities.

When Raymond first began at the school, Tetschner said the students seemed a little fearful, but now that he is in their classes, “it is so heartwarming to see one of the big football players yell down the hall, ‘Hi Raymond!'”

“They are starting to take an interest in him and be friends,” she said.

Outside the classroom, Raymond participates in school life too. He is a manager of the football team, has a role in the school play and is a choir member.

“Raymond has made our school better,” said Clark. “We learn to see the dignity of all people.”

He said the future of the program is “whatever God has in store for us,” but added that he knows there is a large community of people who are looking for a Catholic school for children with disabilities.

“We will continue to grow; we will continue to keep our doors open to more students, because we know it is the right thing to do,” said Clark, adding that he was grateful to the Tetschner family for believing in Bishop McNamara High School.

He understands fears that some schools face about starting a similar program, but he thinks it is necessary to “just plunge forward, knowing the Holy Spirit is guiding you and there is grace to be gained, and figure it out as you go along.”

NEXT: Louisiana Catholic school features full-sized saints in every classroom