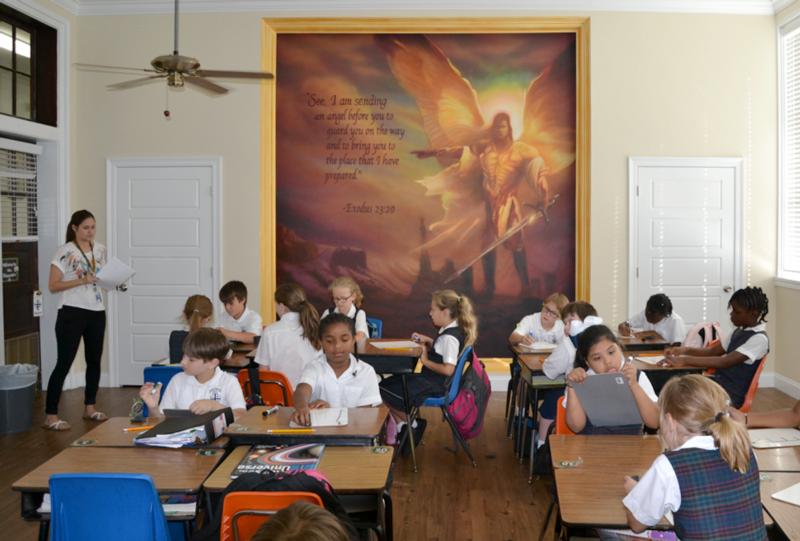 A painting of St. Michael the Archangel covers the wall of a classroom in Mater Dolorosa School in Independence, La. Every classroom at the Catholic elementary school has a full-size religious painting as part of a multi-phase revitalization plan by the school’s principal. (CNS photo/Bonny Van, The Catholic Commentator)

INDEPENDENCE, La. (CNS) — St. Padre Pio, St. Teresa of Kolkata and St. Michael the Archangel are among the saints keeping a close watch over students at Mater Dolorosa School in Independence.

The wall-sized images and their words adorn the back of every classroom as part of a multi-phase revitalization plan for the school by principal Cheryl Santangelo.

“When I got here last year, July 5, the building was deplorable,” said Santangelo. “The carpet was here when my daughter went to school here (35 years ago).”

Reaching out to friends and church members, the principal raised $11,500 in two weeks. An anonymous donor also contacted her about renovating a classroom. Santangelo said she chose the computer room because it was “the room that all students touch.”

She said the room had filthy flooring and old, faded curtains hung on shower curtain rods at the windows. It also needed new wiring, which was all done through donations.

“This is what we came up with,” said Santangelo as she opened the door to a large, brightly lit room with cream-colored walls. The room was filled with students, working at computer stations but above them on the ceiling was a huge image of Mary Queen of Peace looking down on the students.

“We wanted to start with Mary because that’s our mother,” said Santangelo. “She has that peace about her, Our Lady of Peace, and you can see how the kids react and respond. I haven’t had any discipline problems since school started.”

The artwork was painted by R.C. Davis, a popular Louisiana artist whose specialty is painting landscapes. It took him 75 hours, lying on his back to paint the image of Mary.

“I let them guide me,” said Davis of the commissioned work. “I try to understand what it is they want. I’m not an artist that needs to express my opinions or artistic intent. I like what’s going on here, the inspiration. I like being a part of this.”

New paint and trim work in each classroom highlight the museum-quality artwork. The paintings are featured in a gold frame and take up an entire wall. According to Davis, the images in the lower grades have softer features with childlike eyes, while those in the upper grades are more realistic. Davis, who has been painting for 40 years, said he studied each of his subjects before beginning his work so that he could incorporate that into their likeness.

He told The Catholic Commentator, newspaper of the Diocese of Baton Rouge, that the nine paintings at the school took 513 hours total.

“It reminds you why we’re here. It’s a good reminder and it’s great art,” said Liz Brady, a substitute teacher for eighth grade in the St. Padre Pio classroom.

“Students are really impressed by it and they’re careful with it. If I walk too close to it, they’re like, ‘Don’t get too close to that. Don’t step on the trim. You’re not supposed to touch it.’ They’re very protective of it.”

Santangelo said she was inspired to “put religious feelings back in the school” after a discussion with a local priest. Also, the death of her son, Johnny Santangelo, 30, from a brain tumor in March 2016 gave her a new insight into her faith and makes her view her work as a mission, not a job.

“It’s all about God and giving our faith to the Lord. And, I wanted to bring the Catholicism back into the school,” she said.

Van is a staff writer at The Catholic Commentator, newspaper of the Diocese of Baton Rouge.

NEXT: ‘Panama in the Capital’ offers World Youth Day experience closer to home