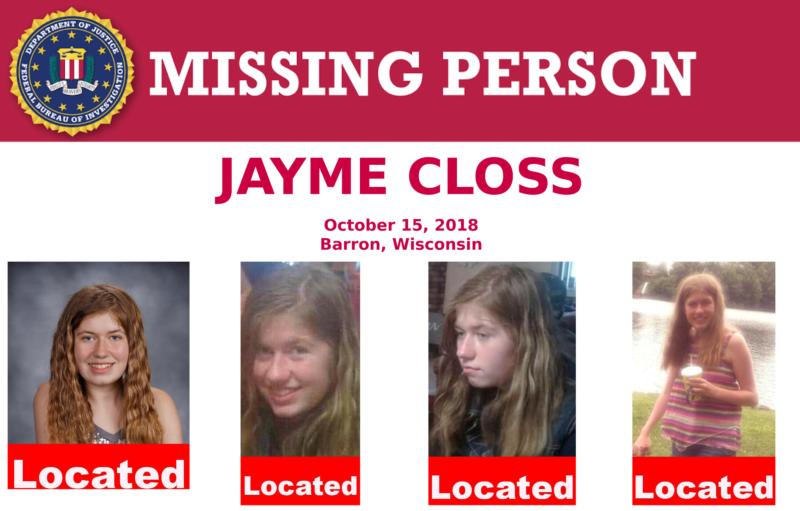 Wisconsin teen Jayme Closs is seen in this U.S. Federal Bureau of Investigation missing person poster. She had been missing for nearly three months after being kidnapped, but she escaped her abductor Jan. 10 in Gordon, Wis. (CNS photo/FBI handout via Reuters)

WASHINGTON (CNS) — For nearly three months, parishioners at St. Peter Catholic Church in Cameron, Wisconsin, were praying for the safe return of one of their own — 13-year-old Jayme Closs.

When parishioners heard the news that she had escaped her abductor Jan. 10 and was safe, their prayers switched to gratitude.

The parish sign said, “Praise God Welcome Home Jayme,” after its Mass times listing. It joined dozens of messages that had sprung up in signs and storefronts across the Wisconsin town and neighboring towns cheering the teen’s safety.

“Our prayers have been answered and God is good,” parishioner JoAnn Trowbridge told the local NBC affiliate, WEAU, after Jan. 13 Mass at St. Peter. She also said she thinks their prayers may have been answered because “God got sick of us nagging him.”

St. Peter, in the Diocese of Superior, is where Jayme attended religious education classes and Mass with her parents, James and Denise, who were murdered Oct. 15, 2018. Their funeral Mass was celebrated at the church Oct. 27.

Superior Bishop James P. Powers said in a Jan. 11 message to priests and parish leaders that he hoped all parishes would add a “thanksgiving petition to God” during Masses that Jayme was found alive and safe. He said that during her nearly three-month captivity, she had to endure “God knows what kind of physical and mental torture as we kept her in our prayers asking for her safe return.”

“We now want to keep her in our prayers asking God’s healing touch on her body, mind and spirit,” he said in a message posted on the Facebook page of the Catholic Herald, Superior’s diocesan newspaper.

Jake Patterson, 21, has been charged with couple’s murder and with kidnapping Jayme, both of which he has confessed to, according to a criminal complaint released Jan. 14 by the Barron County District Attorney.

Jayme was found in the town of Gordon, about 70 miles from her home in Barron, when she escaped the cabin in the woods where she had been held for 88 days and met a woman walking a dog who took her to a nearby home and called police.

Barron County Sheriff Chris Fitzgerald told reporters when he announced the teen’s return that she was back through the “hope and the prayers in this community and what everybody did.”

He also primarily praised the teen saying: “She took that first step. Taking that step was just unbelievable.” He said when people talk about this kind of situation with their kids they need to advise them: “Never give up hope, keep your prayers alive. When you get into a situation, you never give up.”

Jayme is currently staying with an aunt. Her grandfather told The Associated Press that she is “in exceptionally good spirits.”

St. Peter Church will hold a special service of Thanksgiving for her return Jan. 20.
During the parish’s Jan. 13 Mass, parishioners prayed for Jayme and her family and for all who had searched for the teen while she was missing.

They said they want her to know of their support in the weeks, months and years ahead, particularly that she can “handle this and get her life back together,” as one parishioner put it.

NEXT: All Americans urged to ‘stand together’ to reject religious bigotry