All Americans urged to ‘stand together’ to reject religious bigotry 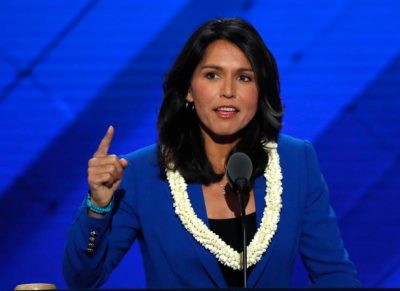 WASHINGTON (CNS) — All Americans, both elected officials and ordinary citizens, “must stand together” to “call out and reject religious bigotry no matter where it comes from,” said U.S. Rep. Tulsi Gabbard, D-Hawaii.

We must “fight to protect the freedoms and principles that bind us together as Americans,” she said in an Jan. 8 op-ed for The Hill.

“Whether we think of ourselves as Christians, Hindus, Muslims, Sikh, Buddhists, Jews, atheists, agnostics, or anything else,” she said, “it is imperative that we stand united in our commitment to protect religious freedom and the right to worship or not worship, safely and without the fear of retribution.”

Gabbard, who is Hindu, said that “for too long in our country, politicians have weaponized religion for their own selfish gain, fomenting bigotry, fears and suspicions based on the faith, religion or spiritual practices of their political opponents.

In the op-ed, she said she objected to the treatment of Brian Buescher, a Catholic nominated for a judgeship for the U.S. District Court for the District of Nebraska.

During his Nov. 28 confirmation hearing, Sen. Kamala Harris, D-California, a member of the Senate Judiciary Committee, expressed concern about Buescher being a member of the Knights of Columbus because of the organization’s opposition to abortion and same-sex marriage.

She criticized the Knights for being “an all-male society comprised primarily of Catholic men.”

Another Judiciary Committee member, Sen. Marie Hirono, D-Hawaii, said the fraternal organization “has taken a number of extreme positions” and asked Buescher: “If confirmed, do you intend to end your membership with this organization to avoid any appearance of bias?”

In her op-ed, Gabbard said that while she does not support Buescher’s nomination, “I stand strongly against those who are fomenting religious bigotry, citing as disqualifiers Buescher’s Catholicism and his affiliation with the Knights of Columbus.”

“If Buescher is ‘unqualified’ because of his Catholicism and affiliation with the Knights of Columbus, then President John F. Kennedy, and the ‘liberal lion of the Senate,’ Ted Kennedy, would have been ‘unqualified’ for the same reasons,” she said.

“Article 6 of the U.S. Constitution clearly states that there ‘shall be no religious test’ for any seeking to serve in public office,” said Gabbard, who declared Jan. 11 she is going to run for the Democratic presidential nomination in 2020.

She also criticized Sen. Dianne Feinstein, D-California, for telling another Catholic court nominee, Amy Coney Barrett, that “the dogma lives loudly within you,” during 2017 hearings for her nomination as a judge of the 7th U.S. Circuit Court of Appeals.

“No American should be told that his or her public service is unwelcome,” Gabbard said.

“While I absolutely believe in the separation of church and state as a necessity to the health of our nation, no American should be asked to renounce his or her faith or membership in a faith-based, service organization in order to hold public office,” she wrote.

“The party that worked so hard to convince people that Catholics and Knights of Columbus like Al Smith and John F. Kennedy could be both good Catholics and good public servants shows an alarming disregard of its own history in making such attacks today,” she added.

This is “religious bigotry,” she said. “This is true not just when such prejudice is anti-Catholic, but also when it is anti-Semitic, anti-Muslim, anti-Hindu, or anti-Protestant, or any other religion.”

She pointed to the “heartbreaking atrocity in Pittsburgh, where 11 people were murdered while worshipping at their synagogue” last October as “the latest reminder of the horrible potential consequence of prejudice and bigotry.”

A 2012 shooting at a Sikh temple in Oak Creek, Wisconsin, a 2016 shooting at a New York mosque “and too many others to list serve as devastating and atrocious reminders of what this kind of hatred and this kind of bigotry can lead to,” Gabbard said.

“Hatred and bigotry are casting a dark shadow over our political system and threatening the very fabric of our country,” she said.

A major in the Army National Guard who was first elected to Congress in 2012, Gabbard said that when she was deployed in the Middle East in 2005, she “saw firsthand the suffering and violence that is inherent to religious bigotry, adding that “insane sectarian divides and prejudices gave rise” to the Islamic State and other terrorist organizations.

“If we can all agree that we do not want prejudice and bigotry to rule our nation, then we must stand united to denounce it whenever it raises its ugly head … and fight to protect the freedoms and principles that bind us together as Americans,” she said.

NEXT: Judges block expansion of religious exemptions to HHS mandate