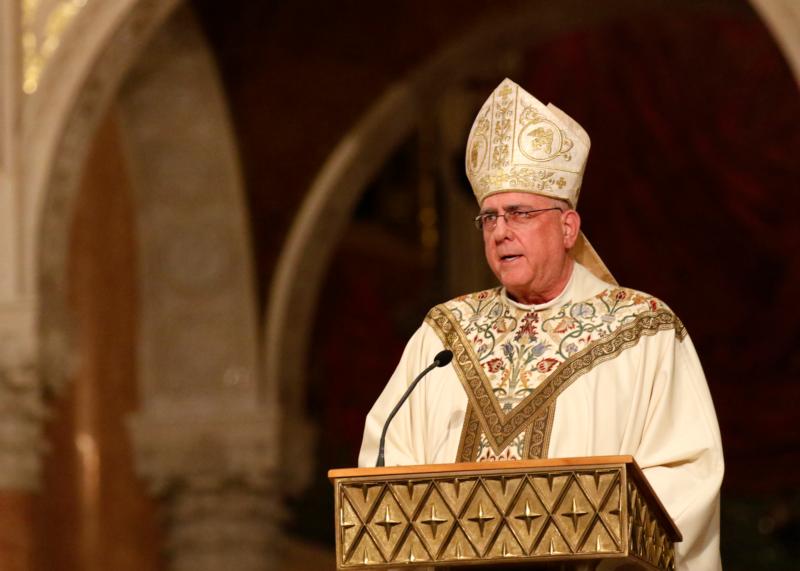 Archbishop Joseph F. Naumann of Kansas City, Kan., chairman of the U.S. bishops’ Committee on Pro-Life Activities, delivers his homily during the opening Mass of the National Prayer Vigil for Life Jan. 17 at the Basilica of the National Shrine of the Immaculate Conception in Washington. (CNS photo/Gregory A. Shemitz)

WASHINGTON (CNS) — The two Supreme Court cases that legalized abortion virtually on demand in the United States were based on “deception,” said Archbishop Joseph F. Naumann of Kansas City, Kansas.

“The late Norma McCorvey, Jane Roe of Roe v. Wade, lied about being gang-raped,” said Archbishop Naumann, new chairman of the U.S. bishops’ Committee on Pro-Life Activities. “After her pro-life conversion, Norma acknowledged that she was deceived by her attorneys about the reality of abortion. For the last 20 years of her life, Norma McCorvey labored tirelessly to overturn Roe v. Wade.”

In his homily at the Jan. 17 March for Life vigil Mass at the Basilica of the National Shrine of the Immaculate Conception in Washington, Archbishop Naumann said, “The late Sandra Cano, the Jane Doe of the Doe v. Bolton decision, never wanted an abortion.”

He added, “Her lawyers, whom she had engaged to assist with regaining the custody of her children, used her difficult circumstances to advance their own ideological goal to legalize abortion. She actually fled the state of Georgia, when she feared that her lawyers and family members intended to pressure her to actually have an abortion.”

“Nathanson, one of the founders of NARAL and himself an abortionist, became pro-life not because of theology or any religious sentiment, but from his own study of the scientific advancements in embryology and fetology,” he said. “While it is true that Dr. Nathanson eventually became Catholic, it was long after he had become a pro-life advocate because of science.”

Archbishop Naumann criticized one of the consequences of legal abortion.

“Protecting the life of the unborn children is the pre-eminent human rights issue of our time, not only because of the sheer magnitude of the numbers, but because abortion attacks the sanctuary of life, the family. Abortion advocates pit the welfare of the mother against the life of her child,” he said.

“Every abortion not only destroys the life of an innocent child, but it wounds and scars mothers and fathers who must live with the harsh reality that they hired someone to destroy their daughter or son. In reality, the welfare of parents and their child are always intimately linked.”

“We assemble in 2019 with some new hope that the recent changes in the membership of the Supreme Court may result in a re-examination and an admission by the court of its tragic error 46 years ago,” he said, referring to the addition of Justices Brett Kavanaugh and Neil Gorsuch. “We pray that state legislatures and the people of this country will again have the ability to protect the lives of unborn children.”

He added, “At the same time, we are sobered by the ferocity and the extremism of the proponents of legalized abortion as evidenced in the recent confirmation process to fill a vacancy on the U.S. Supreme Court. Recently, two members of the Senate Judiciary Committee questioned the suitability of a judicial nominee because of his membership in an extremist organization” — and here he paused to make a face, as if he couldn’t believe what he was about to say next — “the Knights of Columbus.”

The Mass, which brought an estimated 10,000 people into the basilica’s Great Upper Church, was not as filled with pomp and grandeur. The entrance procession, for instance, lasted 17 minutes — less than half the 35 minutes recorded in some past years.

Also, after the prayers the faithful, all at Mass read aloud a “Prayer for Healing Victims of Abuse,” which read in part, “Gentle Jesus, shepherd of peace, join to your own suffering the pain of all who have been hurt in body mind, and spirit by those who betrayed the trust placed in them. Hear our cries as we agonize over the harm done to our brothers and sisters.”

Archbishop Naumann also mentioned the abuse crisis in his homily.

“For all Catholics, the last several months have been profoundly difficult. We’ve been devastated by the scandal of sexual misconduct by clergy and of past instances of the failure of bishops to respond with compassion to victims of abuse and to protect adequately the members of their flock,” he said.

“The abuse of children or minors upends the pro-life ethic because it is a grave injustice and an egregious offense against the dignity of the human person,” he said. “Moreover, the failure to respond effectively to the abuse crisis undermines every other ministry in the church.”

PREVIOUS: No place for ‘religious test’ in government, says Senate in unanimous vote

NEXT: ‘So small a thing’ can be a big deal, bishop says at march vigil’s end