‘So small a thing’ can be a big deal, bishop says at march vigil’s end 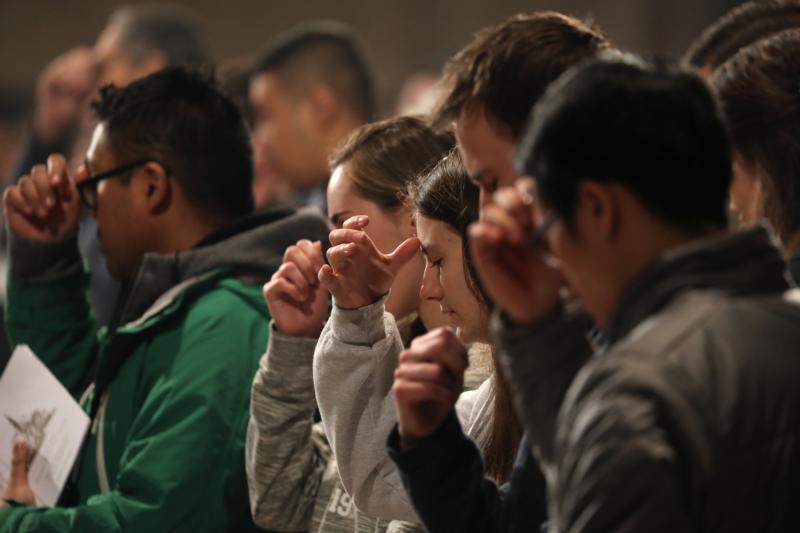 Young people make the sign of the cross on their foreheads during the closing Mass of the National Prayer Vigil for Life Jan. 18 at the Basilica of the National Shrine of the Immaculate Conception in Washington. (CNS photo/Bob Roller)

WASHINGTON (CNS) — Bishop Barry C. Knestout of Richmond, Virginia, quoted from Catholic author J.R.R. Tolkien to make a pro-life point during his homily at the Jan. 18 Mass that closed the Vigil for Life.

“In J.R.R. Tolkien’s ‘The Lord of the Rings,’ there is a passage where Boromir, a lord of Gondor, is tempted by the Ring of Power. He holds it up, while being tempted to use its power to defend his people, and he says: ‘The ring! Is it not a strange fate that we should suffer so much fear and doubt for so small a thing? So small a thing!'”

But those small things can be big deals, Bishop Knestout said at the Mass, celebrated at the Basilica of the National Shrine of the Immaculate Conception in Washington.

He pointed to three small things: the splitting of the atom, the invention of the microchip, and the development of the birth control pill.

With the first, “unbelievable destructive power is unleashed when that stability and union of the atom is broken,” Bishop Knestout said. “When these are in their right relationship, stability and peace are the result.” When they are not, he added, the result can be destruction “almost beyond our imagination.”

Because of the microchip’s ubiquitousness, “communication and communicator are divided,” he said. “Before this technology, both communicator and communication were present at the same time, and you must deal with the person in front of you — not some anonymous, abstract entity or idea that can be attacked or discarded easily.”

With the pill, Bishop Knestout said, “life and love, husband and wife are divided. Union and communion with one another and with God is broken. From this is unleashed the destruction of the family, right relationships between human beings. What results are broken families, societies and cultures.”

Bishop Knestout remarked on how Washington, site of the March for Life, has also been the site of division.

“We celebrate this Mass for Life just a few months after the 50th anniversary of the promulgation of ‘Humanae Vitae,'” which proscribed the use of artificial contraception, he said. 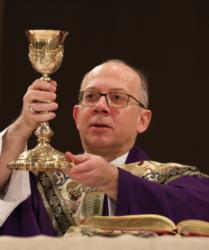 Bishop Barry C. Knestout of Richmond, Va., elevates the chalice as he celebrates the closing Mass of the National Prayer Vigil for Life Jan. 18 at the Basilica of the National Shrine of the Immaculate Conception in Washington. (CNS photo/Bob Roller)

“We celebrate this Mass for Life in the city of Washington, the nation’s capital, where the pill was approved by the FDC in 1960, where the American ‘Humanae Vitae’ crisis was centered in 1968, where the Supreme Court decided that abortion was a constitutionally protected right in 1973, and where the sexual abuse and church leadership crisis has been centered in 2018,” Bishop Knestout added.

“It is a strange fate that these have all occurred here, but it has a lesson for us. These secular and ecclesial crises can be linked together through a small but challenging teaching.”

Many of the things St. Paul VI predicted “if society came to accept the idea that the unitive and procreative ends of marriage could be separated” have come to pass, Bishop Knestout said.

The bishop included among them “the general lowering of morals in society,” “the objectification and attacks on the dignity of women,” “widespread pornography, and addiction to it,” and “coercion by the state in matters of reproduction and family life.”

The “remedy” Bishop Knestout suggested: “We must return to the Gospel, and the teachings of Christ. … The remedy is embracing the face of God in each person and embracing what the church teaches about human life. When we do that, we need not fear the dark of night, or the discord of nations.”