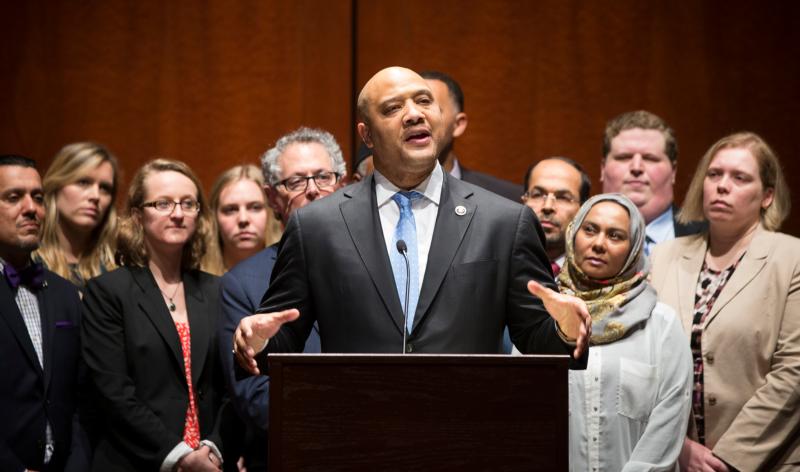 In this May 11, 2016, photo, U.S. Rep. Andre Carson, D-Ind., endorses the proposed Freedom of Religion Act announced that year by U.S. Rep. Don Beyer, D-Va., at the House Triangle in Washington. On Jan. 16, 2019, Carson and dozens of House Democrats reintroduced the bill to ban what they claim is immigration discrimination by the Trump administration. (CNS photo/Tyler Orsburn)

WASHINGTON (CNS) — The Freedom of Religion Act, introduced Jan. 16 in the House of Representatives, would — if enacted in its current form — ban religious discrimination in the U.S. immigration system.

The bill was introduced with 124 co-sponsors. Its general provision says, “Notwithstanding any other provision of the immigration laws, an alien may not be denied entry, re-entry or admission to the United States, or any other immigration benefit, because of the alien’s religion or lack of religious beliefs.”

Exceptions may be granted “when exercised on a case-by-case basis,” the bill says, “with respect to an individual who a consular officer, an immigration officer, the attorney general, the secretary of state, the secretary of Homeland Security, or the president determines may pose a threat to United States national security interests.”

A similar bill was introduced in 2016 as a reaction to then-candidate, now-President Donald Trump’s call for a “Muslim ban” for immigration to the United States.

The president has said the travel ban is necessary to protect the United States from terrorism by Islamic militants who could enter the U.S.

Trump’s third try at an executive order, issued in September 2017 and which banned entry to immigrants from eight countries — five of which are predominantly Muslim — was upheld last June by a 5-4 vote of the U.S. Supreme Court. Trump’s first travel ban, issued right after he took office, was blocked by several U.S. courts. A few months later, a second version of the ban was similarly blocked by several lower courts.

The current version of the directive is indefinite about how long it will be in place and applies to travelers from the majority-Muslim countries of Iran, Libya, Somalia, Syria and Yemen. It also blocks travelers from non-Muslim countries: North Korea and some Venezuelan government officials and their families.

The Freedom of Religion Act has the support of a number of Catholic organizations, including the Columban Center for Advocacy and Outreach, the Franciscan Action Network, the National Advocacy Center of the Sisters of the Good Shepherd, and the Catholic social justice lobby Network.

“We prioritized introducing this legislation because portions of President Trump’s Muslim ban remain in force and are at odds with American values and principles,” said a Jan. 16 statement by Rep. Don Beyer, D-Virginia, who introduced both the 2019 and 2016 bills.

“The Freedom of Religion Act reaffirms our country’s fundamental tenets: our constitutional guarantee of religious freedom and our values of tolerance and pluralism,” said a Jan. 16 statement from Rep. Betty McCollum, D-Minnesota, a co-sponsor. “Discrimination based on religion divides our communities and makes our country more isolated.”

The bill, she added, will “make it unequivocally clear that the United States will never stand for religious discrimination.”

“We are at a turning point in our history. We must decide whether we stand for liberty and equality or oppression and bigotry,” said a Jan. 16 statement from Rep. Ilhan Omar, D-Minnesota, one of two first-term Muslim women in the House.

She called the Muslim ban “one of this administration’s most potent symbols of hate — and it is having devastating consequences on families fleeing hardship.” Omar added she was proud to join her House colleagues in co-sponsoring supporting the bill “as someone who came to the U.S. from one of the banned countries (Somalia).”

“As a daughter of immigrants and a proud Jew, I will never forget where my family came from or the horrors that members of my community have experienced,” said a Jan. 16 statement from Rep. Jan Schakowsky, D-Illinois.

“Bigotry does not make America great — nor does erecting a 2,000-mile wall,” she added. “This undermines our strength as a country by giving in to fear-mongering, hate and division. Welcoming people of all faiths, and from all regions, is the best way to counter hatred and extremism.”

Chief Justice John Roberts issued the Supreme Court’s June ruling on on the ban, supported by Justices Anthony Kennedy, Clarence Thomas, Samuel Alito and Neil Gorsuch. It said the president’s proclamation is “squarely within the scope of presidential authority” under the Immigration and Nationality Act.

PREVIOUS: High court takes no action on appeal of injunction on plans to end DACA