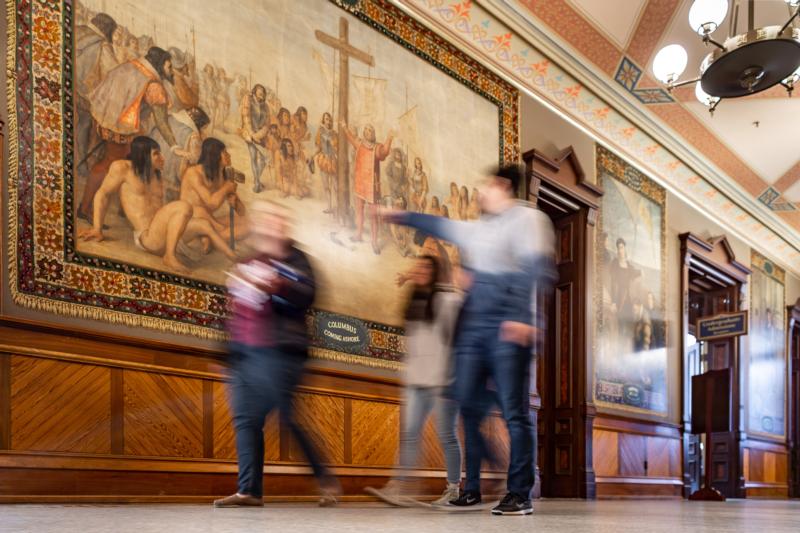 Murals by Luigi Gregori that adorn the ceremonial entrance to the University of Notre Dame’s main building, depicting the life and exploration of Christopher Columbus, are seen Oct. 10, 2015, on the campus in Indiana. Holy Cross Father John I. Jenkins, president of the university, has determined the historic murals depicting Columbus’ arrival in the New World will be covered, saying he feels today those images marginalize certain groups. (CNS photo/Matt Cashore, courtesy University of Notre Dame)

SOUTH BEND, Ind. (CNS) — The president of the University of Notre Dame in South Bend announced that in consultation with other school officials, he has decided to cover 19th-century murals in a prominent campus building that depict the life and exploration of Christopher Columbus.

The works by Luigi Gregori that adorn the building’s ceremonial were painted in 1882-84, not long after a devastating fire and reconstruction” of the structure, Holy Cross Father John I. Jenkins, wrote in a letter to the campus, released a day before Martin Luther King Jr. Day Jan. 21 and was the university geared up for its annual Walk the Walk Week in honor of the holiday.

The paintings “reflect the attitudes of the time and were intended as a didactic presentation, responding to cultural challenges for the school’s largely immigrant, Catholic population,” he explained. “In recent years, however, many have come to see the murals as at best blind to the consequences of Columbus’ voyage for the indigenous peoples who inhabited this ‘new’ world and at worst demeaning toward them.”

So the murals will be covered by a woven material “consistent with the decor of the space, though it will be possible to display the murals on occasion,” he continued.

“I will establish a committee to decide on the place to display the images of the murals and the appropriate communication around the display. We will begin soon the making of covers for the murals.”

The paintings themselves cannot be moved because Gregori painted them “directly on to the plaster of the walls, and so any attempt to move them would damage and likely destroy the works,” Father Jenkins said.

He noted that since the 1990s, a brochure has been provided “that explains to viewers the context of the murals’ composition and some of the historical reality of the events depicted.”

“However, because the second-floor hall of the main building is a busy throughway for visitors and members of the university community, it is not well suited for a thoughtful consideration of these paintings and the context of their composition,” Father Jenkins said.

Therefore, the university will create a permanent display for high-quality, high-resolution images of the murals in a campus setting to be determined, which will be “conducive to such an informed and careful consideration.”

“In recent years I have heard from students, alumni, faculty, staff, representatives of the Native American community and others on this complex topic,” he said. “I have decided, after consultation with the university’s board of fellows, on a course that will preserve the murals, but will not display them regularly in their current location.”

He said the paintings “present us with several narratives not easily reconciled, and the tensions among them are especially perplexing for us because of Notre Dame’s distinctive history and Catholic mission.”

“At the time they were painted, the murals were not intended to slight indigenous peoples, but to encourage another marginalized group,” Father Jenkins said. “In the second half of the 19th century, Notre Dame’s Catholic population, largely immigrants or from families of recent immigrants, encountered significant anti-Catholic, anti-immigrant attitudes in American public life.”

Columbus was hailed by Americans generally as an intrepid explorer, the “first American” and the “discoverer of the New World,” he said, and the murals depicted the popular image of Columbus as an American hero, who was also an immigrant and a devout Catholic.

The message to the Notre Dame community “was that they too, though largely immigrants and Catholics, could be fully and proudly American,” he said.

“But for the native peoples of this ‘new’ land, however, Columbus’ arrival was nothing short of a catastrophe,” the priest said. “Whatever else Columbus’ arrival brought, for these peoples it led to exploitation, expropriation of land, repression of vibrant cultures, enslavement, and new diseases causing epidemics that killed millions.”

Showing Columbus “as beneficent explorer and friend of the native peoples hides from view the darker side of this story, a side we must acknowledge,” Father Jenkins said.

The goal now is “to respect both Gregori’s murals, understood in their historical context, and the reality and experience of Native Americans in the aftermath of Columbus’s arrival,” he added.

NEXT: Archbishop Wester: ‘Catholic’ groups on ‘pro-choice’ ad not affiliated with church