Ordaining women deacons is ‘about ministry,’ not ‘power,’ says speaker 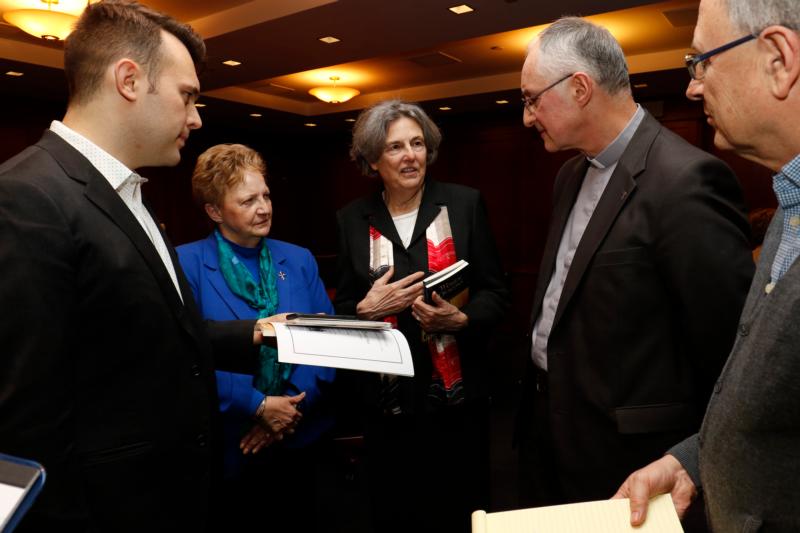 Catholic scholar and author Phyllis Zagano (center) is flanked by Dominican Sister Donna Ciangio and Jesuit Father Bernard Pottier as she speaks with journalists prior to a Jan. 15 symposium on the history and future of women deacons in the Catholic Church. Held at Fordham University’s Lincoln Center campus in New York City, the event was hosted by the Fordham Center on Religion and Culture. (CNS photo/Gregory A. Shemitz)

NEW YORK (CNS) — Ordaining women to the permanent diaconate now, when the church is “crying for ministry,” is a logical way to fulfill its obligation to bring the Gospel to all people, according to panelists at a Jan. 15 event at Jesuit-run Fordham University in New York.

There is incontrovertible evidence that women served as deacons in the early church, they said.

Two speakers at the event on “The Future of Women Deacons” are members of a commission on the diaconate of women established in August 2016 by Pope Francis to review the theology and history of the office of deacon. The group met over a two-year period and submitted its report to the pope in late 2018.

Phyllis Zagano said women served as deacons until the 12th century in the Western church and somewhat longer in the Eastern church. Zagano, a member of the papal commission, is an author and senior research associate-in-residence at Hofstra University.

“While there is no doubt that women deacons existed, there are differing opinions about the nature of their ordination,” Zagano said. The terms “ordained” and “blessed” were used interchangeably in reference to both deacons and priests, she said.

Zagano’s research included examination of church manuscripts from the fourth to 16th centuries that are housed in the Vatican Library. She said the liturgical ceremony used by bishops to create women deacons included all the elements of sacramental ordination according to the criteria established by the Council of Trent.

“If a bishop is laying hands on a woman, invoking the Holy Spirit, putting a stole on her, giving the chalice for her to self-communicate and calling her a deacon, I don’t know what else to say,” Zagano said. “As I say to many people, ‘If she wasn’t a deacon, he would call her something else.'”

“Self-communicate” refers to the reception of holy Communion without the assistance of a minister. Those who are not ordained may not self-communicate.

Zagano said men and women deacons performed different duties in different places. Women deacons baptized people and anointed the sick, but men deacons did not, she said. If a woman accused her husband of beating her, a woman deacon examined the bruises and “gave testimony to the bishop, who could render a judgment of nullity. To me, that’s an annulment,” she said.

The diaconate was affirmed and restored as a permanent sacramental ministry by the Second Vatican Council. Pope Benedict XVI later revised canon law to clarify that the permanent diaconate is distinct from the transitional diaconate that is a step toward priestly ordination.

“Many scholars never questioned the received wisdom that women had never been ordained,” said panelist Jesuit Father Bernard Pottier, a member of the papal study commission and a permanent member of the Vatican’s International Theological Commission.

Research has provided “more and more evidence that it was so” and as more scholars and laypeople learn about the new findings, the argument that women were never ordained “is not sustainable anymore,” he said.

“It’s a slow reflection together to get evidence that it’s possible,” Father Pottier said.

The Jesuit traced the disappearance of women deacons to the schism between the Eastern and Western churches in 1054 and the Gregorian reform, which began toward the middle of the 11th century and continued into the first decade of the 12th.

The diaconate as a permanent state first lost ground to the transitional diaconate in the Western church, whose “canonists wanted to define sacraments with clear words” and “wanted a simple process” to priesthood, he said.

Father Pottier said of the 45,000 deacons worldwide, more than 18,000 are in the United States. He said the diaconate also is strong in Germany and Belgium, his home country.

Zagano said the church in some countries “is so poor it cannot train any deacons.”

Dominican Sister Donna Ciangio is chancellor of the Archdiocese of Newark, New Jersey, and the principal and founder of Church Leadership Consultation, an organization that specializes in mission advancement, training and pastoral planning.

People in the pews are open to accepting women deacons, she said. They already experience women in many roles in the parish.

“This is not a step toward priesthood, but a permanent rite restored by the Second Vatican Council. It’s a vocation, a calling” that is consistent with the Christian mission to witness Christ to all people, Sister Ciangio said.

“This is not about power. It’s about ministry,” Zagano said.

Zagano said the papal study commission on the diaconate of women was the first to include equal membership of men and women. Of its 12 members, Zagano said she was the only one who traveled from North or South America to participate.

“We were six men and six women working in the office of the Congregation for the Doctrine of the Faith and the building didn’t burn down. This is historic,” she quipped.

While working on the commission, Zagano lived at Casa Santa Marta, the Vatican guesthouse and residence of Pope Francis. She said interacting with other guests, many of whom were cardinals and bishops, was “a humbling experience.”

They engaged her in conversation and offered “very little pushback” to her research, she said. “They knew I didn’t mean women priests and they knew the history of women deacons.”

Asked if the church has a moral obligation to ordain women deacons, Zagano said, “The church. That’s us. We have the right to call forth people to service. It’s our obligation to do whatever it is to bring the Gospel to the people of the world.”

She said friends of Pope Francis told her he wants the matter of women deacons discussed.

Although it is unclear when the pope will respond to the commission’s report, Zagano said, “I have a great sense he will know the time to say something. … The pope is a man of consensus in hearing what the church needs. I am not afraid. My hope is the pope will do for the church what he thinks best.”

The symposium was organized by the Fordham Center on Religion and Culture and moderated by Basilian Father Thomas Rosica, president of Salt and Light Media in Toronto, Canada.

PREVIOUS: ‘Every life matters’ is resounding message of attendees at Chicago march

NEXT: Panelists talk about fighting abortion, ‘resisting a throwaway culture’