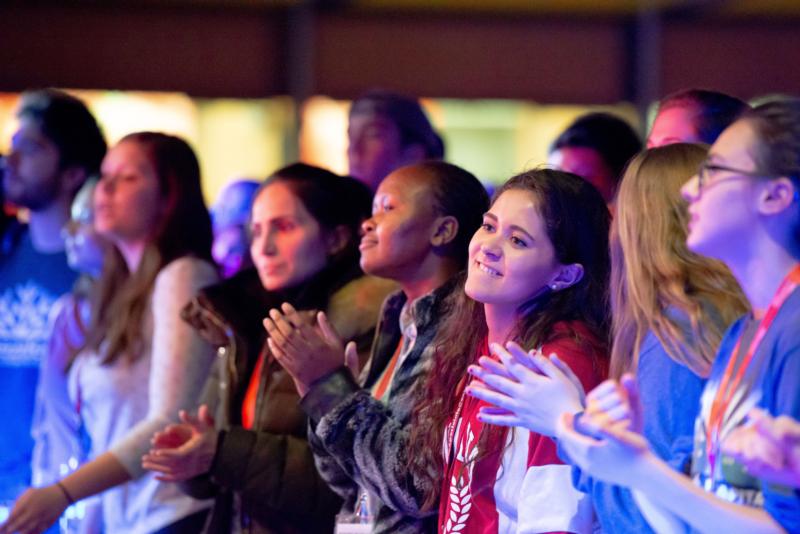 Young adult Catholics enjoy the closing concert at the “Panama in the Capital” event, a stateside festival Jan. 26, 2019, at The Catholic University of America in Washington coinciding with World Youth Day led by Pope Francis in Panama City. (CNS photo/Mihoko Owada, Catholic Standard)

WASHINGTON (CNS) — As World Youth Day 2019 came to a close in Panama, about 1,400 young adults representing about 30 U.S. dioceses gathered Jan. 26 at The Catholic University of America in Washington to join in the joy, prayer and fellowship of the global event.

“Panama in the Capital” was one of numerous stateside events around the country that aimed to capture the joy and celebrations of World Youth Day, and to provide local pilgrimage opportunities for those who could not travel to the Central American country.

It was a perfect event for Lourdes and Jose Linares who traveled from North Carolina with their two young children. “I have always wanted to go to World Youth Day, and thought it would be great for our family, and (to) renew our faith a little bit more,” Lourdes Linares told the Catholic Standard, newspaper of the Archdiocese of Washington.

The daylong celebration took place at Catholic University, the Basilica of the National Shrine of the Immaculate Conception and the nearby St. John Paul II National Shrine. It included a mix of music, panel presentations, opportunities for prayer and fellowship, and a livestream of the prayer vigil led by Pope Francis in Panama.

According to organizers, the event brought together Catholics from the District of Columbia, Maryland, New York, Pennsylvania, New Jersey, North Carolina, Tennessee, Virginia and West Virginia.

The main sponsors of “Panama in the Capital” included the Catholic Apostolate Center, Grotto Network, the St. John Paul II National Shrine, the Embassy of Panama and the Archdiocese of Washington. Other sponsors included the Diocese of Arlington, Virginia; the Diocese of Wheeling-Charleston, West Virginia; the McGrath Institute, the Baltimore archdiocesan Catholic young adult ministry; the Sisters of Bon Secours; Divine Mercy University, Arlington; and Outside the Box Films.

Anthony Lopez and about 15 other members of his young adult group at Divine Mercy Parish in the Diocese of Camden, New Jersey, also made the pilgrimage to Washington.

“It’s nice to see everyone from all different cultures getting together, worshipping, and putting ourselves as one for Christ. It’s really beautiful to see,” Lopez said.

Prayer was a central part of the day’s activities. Baltimore Archbishop William E. Lori led a candlelight Stations of the Cross in the basilica’s Crypt Church in the evening, and eucharistic adoration was available throughout the day at the St. John Paul II Shrine. Pilgrims also had the opportunity to go to confession.

Archbishop Christophe Pierre, apostolic nuncio to the United States, was the main celebrant of a bilingual vigil Mass at the national shrine. Other concelebrants included Washington Auxiliary Bishop Mario E. Dorsonville, Archbishop Lori and Pallottine Father Frank Donio, who is director of the Catholic Apostolate Center.

Archbishop Pierre invited the crowd to follow Mary’s example and find meaning in serving others. He referenced this year’s theme for the international World Youth Day, which highlights Mary’s words at the Annunciation, “I am the servant of the Lord, may it be done unto me according to your word.”

“She was overshadowed by the Holy Spirit and so began a revolution which has not ceased — the revolution of love which comes to us in her son Jesus, the savior of the world,” the archbishop said.

“You have been called by name to be his disciples,” Archbishop Pierre continued, and stressed that as Catholics, all have been given the gift of faith. He advised them to remain strong in the face of adversity and pointed out that even Jesus was ridiculed and rejected at times.

Adding that prayer is essential to deepen the faith, Archbishop Pierre echoed Pope Francis’ message to young people saying, “Take courage, enter within yourselves and say to God, what do you want for me? And allow God to answer you. Then you will see how your life is transformed and filled with joy.”

While most of the Mass was in English and Spanish, the prayers of the faithful were also said in Korean, Mandarin, Portuguese, French and in American Sign Language.

Although organizers could not replicate the balmy weather of Panama, they strived to bring a glimpse of the culture of the country, with some help from the Panamanian Embassy.

Activities included a traditional Panamanian dance from the local group Grufolpawa; an exhibit booth of Panamanian art, crafts and textiles; and a carefully selected Panamanian dinner with traditional “arroz con gandu y pollo,” or rice and beans with chicken, fried plantains and “cocadas,” or coconut cookies.

At the Vocations Coffeehouse, participants watched a livestream of the events in Panama and chatted with priests, religious and seminarians, while tasting authentic Panamanian coffee and desserts.

The multicultural experience continued with two stages and panel presentations for Spanish-speakers that were well received by participants. Panelists included Archbishop Pierre and Father Agustin Mateo Ayala of St. Rose of Lima Parish in Gaithersburg, Maryland.

More than 40 panelists spoke on a wide array of issues including confronting polarization, leadership, building communities, taking prayer to the next level, and finding healing and wholeness as Catholics.

Throughout the day, 10 Catholic bands and singers performed on seven stages spread between Catholic University and the St. John Paul II Shrine.

“These are people who have grown up in times that have not been necessarily easy to be members of this church but who are excited, who are alive about their faith,” said Fricchione. “For those of us who work in the church, it is very exciting to see, to know that there are people who are hungry for this message and who are really looking for that Catholic community they can find here today.”

Montenegro Flynn writes for the Catholic Standard, newspaper of the Archdiocese of Washington.