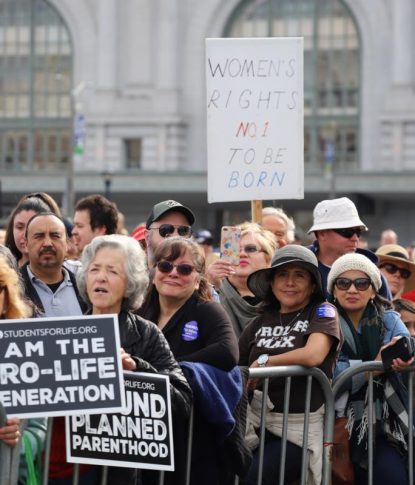 SAN FRANCISCO (CNS) — A throng of upbeat pro-life supporters, some from as far away as Colorado, Arizona and Tennessee, swarmed the streets of downtown San Francisco Jan. 26 carrying a wide array of messages calling for an end to abortion.

A crowd in the tens of thousands poured into Civic Center Plaza on a springlike winter day for the 15th annual Walk for Life West Coast, which marked the 46th anniversary of the U.S. Supreme Court’s Roe. v. Wade decision legalizing abortion.

The event kicked off with prayer, pro-life speakers and the amplified fetal heartbeats of seven babies whose mothers stood on the event stage holding bullhorns connected to their pregnant bellies.

“Babies saving babies,” said Walk for Life chair Eva Muntean. “The babies are here to save their peers.”

A woman allowed to see an image of her unborn baby on an ultrasound screen or to hear its heartbeat will often choose not to abort, pro-life advocates say.

Despite a heavy police presence, the two-mile march from Civic Center Plaza down Market Street to Justin Herman Plaza appeared as peaceful as organizers had hoped. At times it felt more like a celebration than a demonstration.

“This is not a day for confrontation,” Dolores Meehan, co-chair of the walk, advised as the march began. “Just say a prayer and keep it going.”

There were a handful of spontaneous hecklers, including a man who stood near the cable car turnaround on Market Street and shouted, “Go to hell” at the procession. But neither he nor a costumed group of about a dozen more organized counterprotesters distracted the walkers, many of whom smiled and waved at the provocateurs.

For many, the day had begun with morning Mass at St. Mary’s Cathedral celebrated by San Francisco Archbishop Salvatore J. Cordileone, where about 2,900 received holy Communion. Later in the plaza at the start of the rally, he led marchers in a prayer from the event stage.

“Give us to courage to speak the truth with love and conviction in defense of life,” he said.

St. Gianna Beretta Molla (1922-1962) was an Italian pediatrician who refused both an abortion and a hysterectomy while pregnant with her fourth child despite knowing that the decision could result in her own death, which it did.

Ronan turned to the pregnancy center when she found herself pregnant, unemployed and homeless shortly after moving to San Francisco 10 years ago. Despite miscarrying her unborn child, Ronan went on to direct the growth of the center from a small service center to a medical clinic, which today serves 1,000 families a year. She resigned in 2016 after being diagnosed with cancer only months after the birth of her daughter, Catica.

“If you are experiencing tragedy in your life, look at Gianna Molla, look at me, look at Jesus,” she said. “Give him your tragedy and let him turn it into triumph.”

Other speakers included Patricia Sandoval; the Rev. Walter B. Hoye, founder of Issues4Life; Father Shenan Boquet, president of Human Life International; and Abby Johnson, a former clinic director at a Texas Planned Parenthood who is the subject of the movie “Unplanned,” scheduled for release in March.

Sandoval, who had three abortions, was hired by Planned Parenthood to work as a back-office nurse without nursing credentials.

“I was manipulated and trained to lie to women that it was not a baby,” she said.

She turned to cocaine and eventually fell homeless before a conversion experience with a stranger saved her.

“I want people who do not agree with me to hear me,” she said. “I don’t judge you, I was one of you. You think I am fighting to take your rights away? I’m fighting for your rights to be given back to you.”

On the parade route, marchers walked with an array of self-styled messages including, “Make Unborn Babies Great Again.”

No words were required for Katie Forbes’ sign. The Arizona State University student’s exposed belly featured a life-sized painting of her unborn child, Timothy, due in May.

“There is nothing better than an ultrasound to get the pro-life point across,” she told Catholic San Francisco, newspaper of the Archdiocese of San Francisco.

Forbes said as the oldest of eight children from a Catholic family, her values were put to the test when she found herself pregnant and unmarried at 20.

“It was a lot more personal,” she said.

Jim King from Memphis, Tennessee, who became a Catholic over 40 years ago, said his active opposition to abortion grew after he stopped into a Catholic church between business meetings.

“Something almost blew me over from the tabernacle,” he said. “It said to me, ‘Speak up for the unborn children.'”

Californian Ruth Enero, who traveled with members of her church in Modesto, held a handmade sign that read, “Embrace a Consistent Ethic” on one side, and “Value Every Life” on the other. She opposes abortion, war, death penalty, euthanasia and racism and poverty.

“A couple of times I was told it wasn’t a pro-life message,” she said. “But it seems really obvious to me that when you dehumanize any group of people it’s very easy to kill them. All human life needs to be protected.”

The Walk for Life West Coast was one of the last January pro-life marches marking the anniversary of the 1973 Roe decision, which with its companion case, Doe v. Bolton, legalized abortion virtually on demand. Pro-life marches were held in dioceses across the country, with the national March for Life taking place in Washington and drawing more than 100,000 Catholics and others from all over the country.

In Indianapolis Jan. 22, the actual Roe anniversary, 900 people gathered for a Mass celebrated at St. John the Evangelist Church. Afterward, roughly 600 pro-life advocates from around Indiana marched a mile for life in 22-degree wind chill.

“Our gathering today involves the two-fold Christian call to contemplation and action, Mass and march,” Indianapolis Archbishop Charles C. Thompson said in his homily. “Both are necessary for a truly integrated commitment to missionary discipleship, and that’s what our march will be — a mission for the sanctity of life … from the moment of conception to natural death.”

He concelebrated the Mass with Bishop Timothy L. Doherty of Lafayette-in-Indiana and more than a dozen priests from the archdiocese and diocese, which both sponsored the day’s events with Right to Life of Indianapolis.

“We must never lose proper perspective of uniting ourselves to the way of God rather than trying to conform God into our way of thinking,” Archbishop Thompson said. “That’s when humanity loses its way. That’s when things start to break down in our society.”

In a statement released Jan. 22, which also was a National Day of Prayer for the Legal Protection of the Unborn, Florida’s nine Catholic bishops said the church’s teaching on abortion is continuously proving to be prophetic.

“Our nation is increasingly rejecting abortion and Roe v. Wade as states continue to adopt more limitations on abortion and expand alternatives to abortion,” said the bishops. But they also recognized, “There is still much work to be done.”

NEXT: Priest says Christian churches have grown closer in 50 years of dialogue