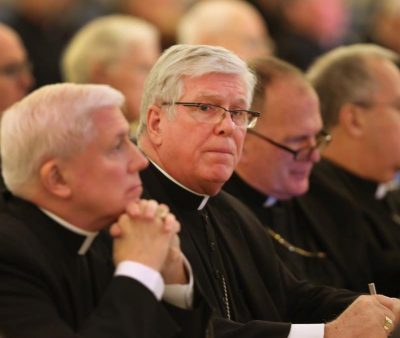 Bishop Frank J. Dewane of Venice, Fla., second from left, is pictured during the Nov. 14, 2017, fall general assembly of the U.S. Conference of Catholic Bishops in Baltimore.  (CNS photo/Bob Roller)

WASHINGTON (CNS) — The chairman of the U.S. bishops’ Committee on Domestic Justice and Human Development said a new carbon pricing bill introduced Jan. 24 in Congress is a “hopeful sign” that “climate change is beginning to be seen as a crucial moral issue, one that concerns all people.”

Bishop Frank J. Dewane of Venice, Florida, added in a Jan. 24 statement: “At a time when the dangerous effects of climate change are becoming increasingly apparent, the need for legislative solutions like this is more urgent than ever.”

The Energy Innovation and Carbon Dividend Act of 2019 is based on a bill introduced in November during the lame-duck session of Congress.

Under the bill, a fee is put on fossil fuels like coal, oil and gas. The fee is small at first and grows over time. According to the Citizens Climate Lobby, which backs the bill, it would reduce carbon pollution because energy companies, industries and consumers will move toward cleaner, cheaper options.

The United States does not regulate carbon emissions for their impact on climate change, and the bill would keep the Environmental Protection Agency from doing so for 10 years. If carbon reduction targets are not met, then Congress directs the EPA to regulate them.

The bill does not regulate auto emissions or water quality. Imports would pay a slight carbon adjustment fee, while U.S. exports would receive a small rebate.

Fees raised from the bill, which is designed to be revenue-neutral, would be distributed equally to all U.S. residents. The Citizens Climate Lobby estimates a family of four would receive a dividend of $3,456.

Many states and municipalities have already enacted laws setting ambitious targets for obtaining a significant percentage of energy from renewable sources in the coming years.

“Fundamentally, this bill is about ensuring that the full spectrum of costs associated with greenhouse gas emissions — economic, social, and environmental — are accounted for,” Bishop Dewane said. “Failing to consider the health and well-being of people, including future generations and the planet, means that ‘businesses profit by calculating and paying only a fraction of the costs involved,'” he added, quoting from Pope Francis’ encyclical “Laudato Si’.”

“This proposed legislation is one possible remedy to addressing these imbalances,” Bishop Dewane said. “Climate change can only ever be adequately addressed if it is done with an eye toward ‘the least of these.'”

PREVIOUS: Steinfels: No one did a deep dive into Pa. grand jury report