Pro-life movement urged to be aggressive, fight abortion on ‘many fronts’ 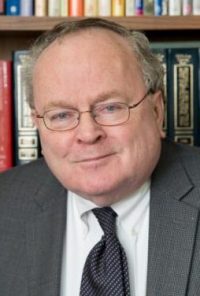 WASHINGTON (CNS) — Abortion has been prominent in the news cycle for most of January as many state legislatures scrambled to get various measures passed near the anniversary of the landmark Roe v. Wade decision, and controversy still swirled about an incident between young March for Life attendees and marchers at another demonstration in Washington.

Lawyer Thomas Brejcha, president and chief counsel for the pro-life Thomas More Society, gave a telephone interview to Catholic News Service Jan. 25 to discuss the current legal landscape surrounding abortion, how current court and legislative battles fit into that landscape, and his hopes for the pro-life movement going forward.

“We have to be as aggressive as possible on as many fronts as possible,” Brejcha said, noting how legal precedent indicates the abortion issue has been “anything but settled” since Roe v. Wade, which was decided in 1973.

In the past year, Brejcha noted, the pro-life movement lost some key battles but scored a significant victory with the nomination of Brett Kavanaugh to the Supreme Court. Brejcha expressed high hopes for Kavanaugh, calling him “very qualified” and told CNS that the new justice had hired a woman from Yale Law Students for Life as a clerk.

Kavanaugh, a former D.C. Circuit judge, who was nominated to the bench by President Donald Trump in May 2018, proved to be a polarizing figure as the interests of both pro-lifers and of supporters of legal abortion recognized he would provide a “swing vote” that could overturn standing abortion precedent.

Brejcha said he “doesn’t worry” about Kavanaugh’s refusal alongside his liberal peers to hear a case in 2018 that would have called into question Planned Parenthood’s inclusion on state Medicaid plans.

According to him, “(The decision) was not precedential, it was simply a conservative jurist’s decision” about which cases would be heard in the next cycle.

Brejcha reeled off some more wins, including the recent defeat of a St. Louis “abortion sanctuary city” ordinance that would have forced pro-life employers to keep employees with whom they disagree on abortion. The Thomas More Society, which is based in Chicago, supported clients in that case who argued that the law infringed on their First Amendment rights.

He then turned his attention to a lost legal battle in Iowa, where the state’s “heartbeat law” was overturned by the Iowa Supreme Court Jan. 22. The law, signed by Gov. Kim Reynolds last May, forbade abortions as soon as as a fetal heartbeat could be detected, sometimes as early as six to seven weeks into a pregnancy.

In that case, Brejcha explained, the Thomas More Society fought not only on behalf of the unborn but on behalf of Iowans: “Iowa is a bit schizophrenic, the people are pretty pro-life, but there are some folks on the Iowa Supreme Court who are pretty opposed. … (Our) main advocacy was to the people of Iowa.”

Brejcha also derided the ruling as having no basis in Iowa’s Constitution, saying the high court “invented a right to abortion” and in doing so “(took) Iowa back to Roe v. Wade.” The Thomas More Society released a statement about the decision where it affirmed the “plain language” of the Iowa Constitution, which counts “enjoying and defending life” among the people’s “inalienable rights.”

Brejcha added New York to his list of woes, where abortion advocates cheered the passage of the Reproductive Health Act Jan. 22. Among other things, the law will permit abortion at any point during a woman’s pregnancy so long as a practitioner can demonstrate it is necessary to her “health.”

The health provision, Brejcha noted, is “hardly a restriction at all” as the Supreme Court case Doe v. Bolton — the companion case to Roe — defines health as a “laundry list of factors,” which can be used to justify an abortion for almost any reason. Effectively, there is “no recognition of personhood under this New York law unless the person is born,” said Brejcha.

However, Brejcha was optimistic for Ohio, where newly minted Gov. Mike DeWine has declared he will “absolutely” sign any heartbeat bill that comes to his desk. Ohio’s last chief executive, John Kasich, vetoed similar bills twice, citing concerns of a costly and protracted legal challenge.

The Thomas More Society “hopes to play a supportive role” the next time a heartbeat bill progresses to the Ohio governor’s office, according to Brejcha, who also related that the bills in the past still had “terrific support” despite getting vetoed.

NEXT: Bishop tells Covington Catholic High School community he stands with them