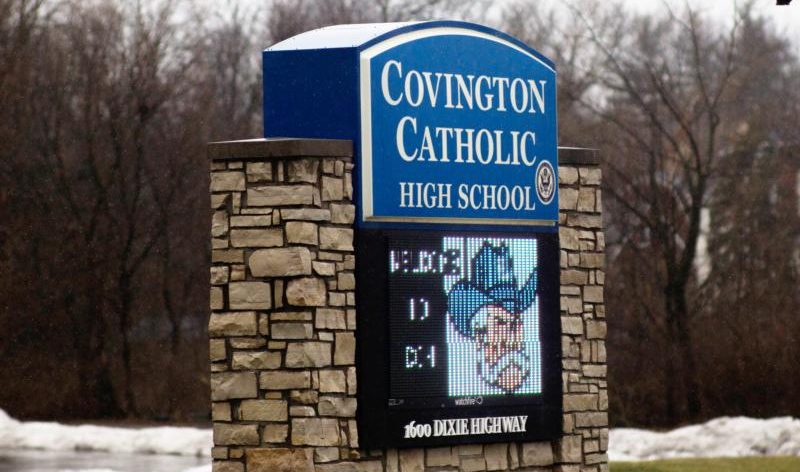 A marquee for Covington Catholic High School is seen Jan. 23 in Park Hills, Ky. Days after an encounter took place between Covington Catholic High School students and a Native American tribal leader in Washington, the Diocese of Covington announced it would begin a third-party investigation into what happened at the foot of the Lincoln Memorial following the annual March for Life Jan. 18. (CNS photo/Madalyn McGarvey, Reuters)

COVINGTON, Ky. (CNS) — You could literally hear a pin drop as the faculty, staff and student body of Covington Catholic High School waited in the gym Jan. 23 for the arrival of Covington Bishop Roger J. Foys.

The bishop was there to address the students about the events that took place Jan. 18, after the March for Life in Washington, where a student standing face-to-face with a Native American elder was captured on video and ignited a firestorm on social media — making headlines around the world.

Bob Rowe, principal, opened with a prayer and introduced Bishop Foys, who said: “These last four days have been a living hell for many of you, for your parents, for your relatives, for your friends and it certainly has been for me.”

The bishop then spoke of how impressive the March for Life had been, especially the Mass celebrated at St. Dominic Church in Washington just before the march when he told the diocesan group of students that when they marched, “they represented what was best about the church and what was best about the Diocese of Covington; that we were sending out our best to stand up for life.”

The following morning, he said, he and diocesan staff members began to receive calls and emails from news stations and people from all over the world commenting about the situation. By the next morning, Jan. 20, the diocesan website, he said, was receiving over 200,000 hits per hour and more than 10,000 emails per hour — which crashed servers. Staff phones rang persistently for days until voicemail boxes were full with calls from media or those who wished to comment on what happened.

Bishop Foys also spoke about the current investigation into what happened and called it a “no-win situation.”

“We are not going to win,” he continued. “No matter what we say, one way or another, there are going to be people who are going to argue about it, people who will try to get into people’s heads and say, ‘This is what he meant. This is what they meant when they were doing this and doing that.'”

He said as Covington’s shepherd he has to present the facts not only the diocese but to the world.

“We’re not going to have you do anything without the permission of your parents. And the teachers and chaperones who were there, I am asking you, too, to be cooperative with this.”

Bishop Foys also said the investigation would take time in order to be thorough.

“Some people’s lives, as you know, have been affected for the rest of their lives and the honor of our school has been tainted. We have received, and probably you have received, horrible, vile e-mails. This brings out the worst in people,” he said.

He said he hoped the students learned that “perception can become reality.”

“A person can be doing something that is absolutely innocent but if he gives the slightest hint, the slightest perception, that this is something wrong that is what people are going to remember, and then for them that becomes their reality,” he added.

He also addressed the initial joint diocesan and school statement about the incident and the criticism it received for being too strong.

“In my mind with what we saw and what we heard at the time, we had to say what we said and we meant it. If that behavior is genuine, then we have to condemn it. ” He added that a second statement was issued Jan. 22.

“Regardless of what you heard or what you’ve read or what you think, I am on your side. I want you to come out of this in a positive light,” he said.

In the updated diocesan statement, he asked people “to pray that we will arrive at the truth,” he said.

“The only way we can do that in an objective way is through a thorough and in-depth investigation. It is my hope and my prayer that, in the end, it will show exactly what happened and that we will be able to stand tall and proud,” Bishop Foys told the assembly.

“People will still criticize us one way or the other — people will believe it or not believe it — but at least we can say we’ve taken the time to talk to all the parties involved and to get all the footage we can that was taken that day and say: ‘Here, this is not what we think happened or what we would like to believe happened, but this is what in fact happened.’ If there was some wrongdoing, we have to own up to that, too.”

In closing, he reminded the students how much he supports Catholic education and Covington Catholic High School in particular.

“It pains me, more than you can imagine, having to be here today; but we can get over this. I’m 73 years old, I have faced a lot of struggles and hardships. We will get over this, there will be time to heal, it will be all right.”

“Know that I stand with you. … Together we will work through this,” he said.

Keener is editor of The Messenger, newspaper of the Diocese of Covington.

PREVIOUS: Pro-life movement urged to be aggressive, fight abortion on ‘many fronts’

NEXT: ‘Panama in the Capital’ event ‘awesome from start to finish,’ says pilgrim