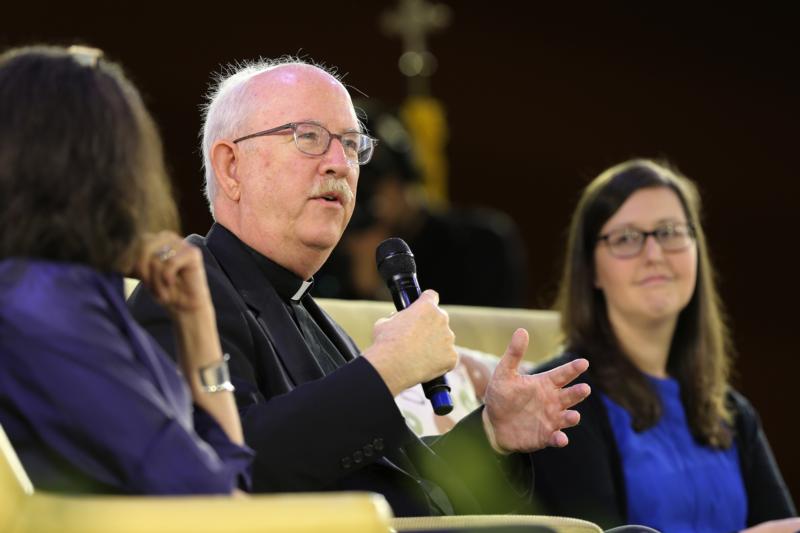 Jesuit Father Thomas Gaunt, executive director of the Center for Applied Research in the Apostolate, is pictured in a July 2, 2017, photo. CARA released a report Jan. 22, 2019, on its findings from a survey of U.S. Catholic bishops and diocesan diaconal directors regarding the sacramental ordination of women as deacons, especially in light of a papal commission tasked with studying the issue. (CNS photo/Bob Roller)

WASHINGTON (CNS) — Should the Vatican permit the ordination of women as deacons — a topic that has been studied by a papal commission — a majority of U.S. bishops surveyed said they would expect the U.S. Conference of Catholic Bishops to pave the way to implement it.

There was, though, only a minority of U.S. bishops answering the survey who believe the ordination of women as deacons is theoretically possible.

These were two key findings of a report issued Jan. 22 by the Center for Applied Research in the Apostolate.

Pope Francis established a 16-member commission on the diaconate of women in August 2016. Members’ task was to review the theology and history of the office of deacon in Roman Catholicism and the question of whether women might be allowed to become deacons.The group met over a two-year period and submitted its report to the pope in late 2018. The findings have yet to be released.

CARA has not polled the bishops often, said Jesuit Father Thomas Gaunt, CARA’s executive director and one of the researchers involved in the survey.

For a new book on U.S. bishops’ views and attitudes on a variety of topics, CARA elicited a response rate of 71 percent, Father Gaunt told Catholic News Service in a Jan. 22 telephone interview. The survey on women deacons elicited a lower response rate of 56 percent from bishops, although 72 percent of diaconate directors responded.

Funding was secured for the survey from the Raskob Foundation in June, Father Gaunt said. “We were getting ready to send this out and it came at the same time as the Pennsylvania grand jury report came out in August,” he added, referring to a report on a monthslong investigation into alleged sex abuse of minors by priests and other church workers in six of the state’s Catholic dioceses over a 70-year period beginning in 1947.

“We thought, ‘Let’s hold on this for a little bit.’ The bishops overwhelmed with items coming in. … We were afraid it would get lost on their desk,” Father Gaunt said. “We sent it out in September and kept it out until it was November.”

By a 3-to-2 margin, bishops thought it was not “theoretically possible” to sacramentally ordain women as deacons, and by a 2-to-1 margin, they did not believe the church should authorize it.

Bishops and diaconate directors alike suggested some of the benefits and challenges to the ordination of women as deacons.

Benefits seen by some bishops included pastoral ministries, teaching and formation, and preaching.

“Some respondents who saw no benefit to having women deacons argued that women already work in those ministries and provide their skill set without being ordained,” the report said. A smaller number of bishops saw benefits in sacramental grace, equality among women and including them in the hierarchy.

One bishop — none of the responses had names attached — said: “I would love to see women deacons, not as ordained male deacons but in a more traditional role as the Eastern churches had them — more like consecrated widows; or virgins; or women who served other women, the poor, the orphans and children, the needy of the church.”

Challenges noted by bishops focused on opposition to such a change from the laity, parishioners, priests, male permanent deacons, and in the church in general. Theological ramifications and “political” consequences also were cited, as were issues relating to implementation of such a change, and negative side effects, such as a detrimental effect on other women in ministry, clericalization of the laity, and the reduced ability to manage ministry and family responsibilities.

Some bishops said the survey itself was skewed, “not good,” questioned whether women as deacons was a proper focus for a survey, or questioned the underlying assumptions about the papal commission’s purpose.

Diaconate directors, when asked about benefits, spoke more about the amount and quality of various ministries, while smaller numbers cited sacramental grace as being a benefit to their diocese, and that more women would be attracted to ministry.

From the directors’ perspective, the opposition, resistance to change or lack of acceptance from priests, laity, male deacons, and other constituencies in the church posed the biggest challenge.

Given a chance to amplify their answers, survey respondents took advantage. One diaconal director said, “We have enough trouble with getting men involved in a parish. I am fearful this could make it worse.”

One bishop cited a political consequence: “It will most definitely lead … to ordaining women as priests, and eventually bishops. It will be incomprehensible to our people that the church would draw a ‘glass ceiling’ at priesthood, after ordaining them deacons. And this despite the definitive teaching, clarified by Pope John Paul II, that the church has no authority to do this. This puts the church in an irresolvable dilemma: It’s against defined church teaching to ordain women as priests, and yet it makes no sense not to if they are already admitted to holy orders.”

One diaconate director who was more supportive of women as deacons said, “Women clergy would give young women role models and examples to aspire to within the church — and demonstrate the complimentarily between service in the church, marriage and family life.” Another said, “It would challenge the men now serving as deacons to realize that ordination is not a right.”

Father Gaunt gave CNS a historical perspective on deacons. “At the (Second) Vatican Council when all this came up, (of) the American bishops, only a minority supported it,” he said. But by the time the Vatican restored the permanent diaconate, “basically everyone moved to have permanent deacons,” Father Gaunt noted.

“It’s interesting to see the pattern,” he said, of whether bishops believe the ordination of women as deacons is theoretically possible “to ‘if this happens and if that happens,’ and people’s openness to moving forward should the Holy See sanction this.”

The full survey on the sacramental ordination of women as deacons can be found here.

NEXT: High court takes no action on appeal of injunction on plans to end DACA